Chile's Atacama Desert is from another world 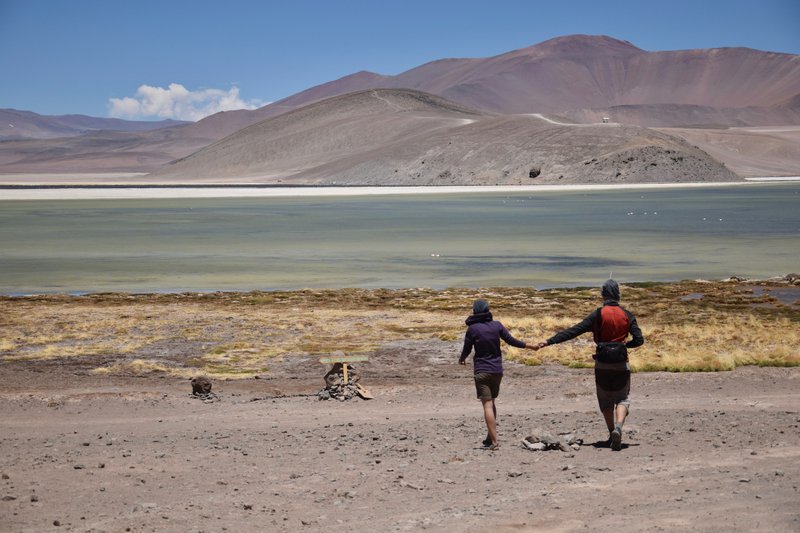 A couple walks towards the shore of Laguna Verde in Nevado Tres Cruces National Park. (Mark Johanson/for the Chicago Tribune/TNS)

COPIAPO, Chile — When my plane touches down at the Desierto de Atacama Airport in northern Chile, it feels as if I’ve been launched out of orbit to some Martian landscape. Aside from the small terminal, there isn’t another building in sight amid a panorama of parched earth.

About 15 miles away from the airport, I’m zapped back to reality at the small beach town of Bahia Inglesa, a toothpaste-blue-colored bay with pearly white sands, where I enlist the help of local guide Carlos Pizarro, of Chillitrip, to explore the remote southern half of the Atacama Desert.

As we head down roads made of bischofite (a sea salt concentrate), we spot nomadic fishermen harvesting seaweed along wild desert beaches. There are also small port towns such as Caldera and Chanaral, where leather-faced men at waterfront markets sell freshly picked piure (a tomato-red sea creature) and tangy ceviches.

Pizarro takes me for a lunch of shrimp empanadas in the small fishing village of La Caleta on a rugged beach within Pan de Azucar National Park. Just offshore, on the park’s namesake island that looks like a sugarloaf, is a small colony of about 40 Humboldt penguins prowling the coast in search of food.

The sea here may be bountiful, thanks to the nutrient-rich Humboldt Current, but the land is barren and thirsty. This is, after all, the driest nonpolar place on Earth. It hasn’t rained in the park in more than a year. There are some weather stations in the Atacama that have never recorded a single drop. Pizarro says that the area we’re visiting is just sleeping for the moment. “It’s waiting for the rain,” he says, “but when it comes, you’ll see how alive the desert really is.”

Sporadic rains every few years cause a desert bloom, when a blanket of pink, white and yellow flowers covers the mountain valleys near the only real city in these parts, Copiapo.

Copiapo, itself, sprouted from the desert in the 18th century as a gold boom town, home to the first railroad in South America and earliest telegraph line in Chile. It remains a prosperous mining town to this day, though copper is the metal du jour. (Chile is the world’s largest copper producer.)

If you’ve heard of Copiapo, it’s no doubt because of the 33 miners who were trapped more than 2,300 feet underground at the nearby San Jose Mine. Their dramatic rescue after 69 days was the Thai cave event of 2010, watched by an estimated global audience of 1 billion and memorialized in The 33, a 2015 movie starring Antonio Banderas.

Despite all the attention, this southern patch of the Atacama Desert has never really caught on with tourists, who generally bypass Chile’s Atacama Region altogether for the resort town of San Pedro in the Antofagasta Region farther north.

I’ve flown into Copiapo’s airport to find out why and to try to discover what everyone else is missing. 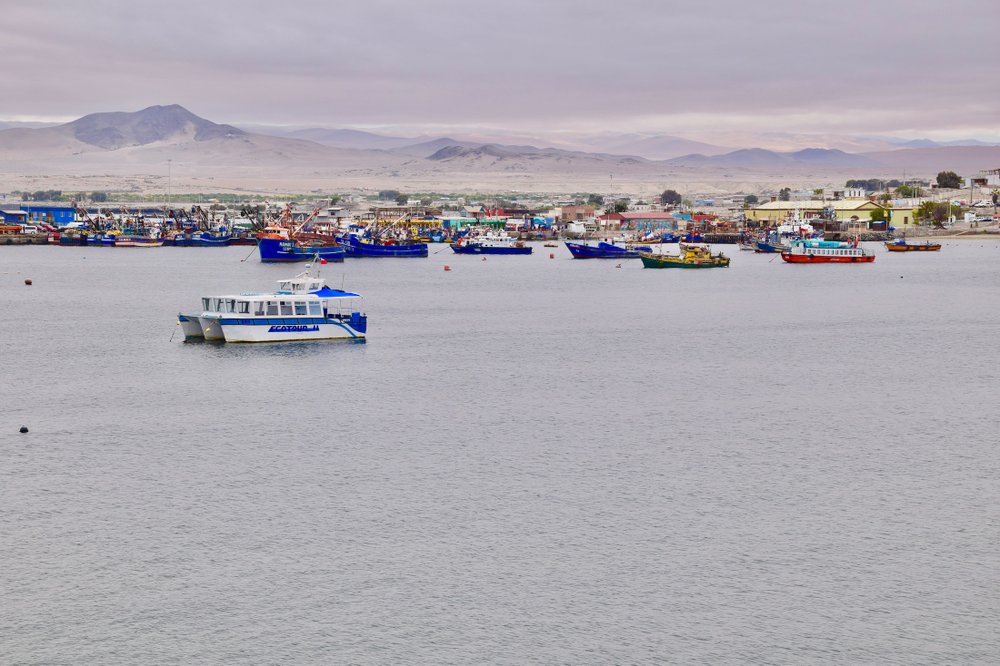 The fishing town of Caldera is one of the few coastal population centers in the southern Atacama Desert.(Photo by Mark Johanson via TNS/Chicago Tribune)

My base is the Hotel Wara (villas from $200 a night), a stunning property decorated with perky cacti and prismatic Andean textiles where Banderas and his fellow actors stayed during the filming of The 33. After a long afternoon traversing the coast, I set off on Day Two with Pizarro to explore some ancient rock art in the nearby Quebrada de las Pinturas.

This jagged ravine is home to a collection of paintings made about 1,500 years ago. They depict llama-like guanacos and humanish figures, and give tantalizing clues about the Las Animas culture, whose people etched out a life in one of the planet’s most inhospitable places. Pizarro says it’s one of the best spots in the Atacama “to reflect on the life of our ancestors and the deep connection they had with the desert.”

The scenery out my window shifts wildly from harsh and angular to soft and powdery, contradicting the stereotypes of deserts as empty, featureless wastelands.

Not far from the rock art, we find ourselves in the Mar de Dunas, a Sahara-like landscape of rolling sandhills that are more than three times the height of their African counterparts. The area is popular for trekking and sandboarding, but we’ve come to do a bit of off-roading a la the Dakar Rally, whose route often snakes through this giant sand trap.

After some heart-pumping action, we climb to the top of the towering Medanoso Dune to place colorful Andean blankets on the sand and watch as the setting sun sends shadows dancing across the desert.

On my final day in the Atacama, Pizarro and I head up to the Altiplano (high plain) via a wide, khaki-colored valley. The plan is to take in the (quite literally) breathtaking features of Nevado Tres Cruces National Park, a cloud-hugging Andean reserve just west of Ojos del Salado, the second-tallest mountain in the Western Hemisphere and highest active volcano in the world at nearly 23,000 feet.

We stop several times on the ride up to acclimate to the altitude, visiting the ghost town of Puquios (former population: 5,000) and some small oases inhabited by the indigenous Kolla community, who sell colorful textiles and blocks of salty-sweet goat cheese. By the time we reach the park entrance, we’re breathing 30% less oxygen at a height of about 13,000 feet.

Pizarro says this area is called the “sky of South America,” as it’s home to a collection of 16 summits more than 20,000 feet. Nowhere beyond the greater Himalayas has such lofty earth. These barren volcanic peaks lie in the backdrop during our afternoon at Laguna Verde, an ethereal green lagoon populated by pink flamingos. 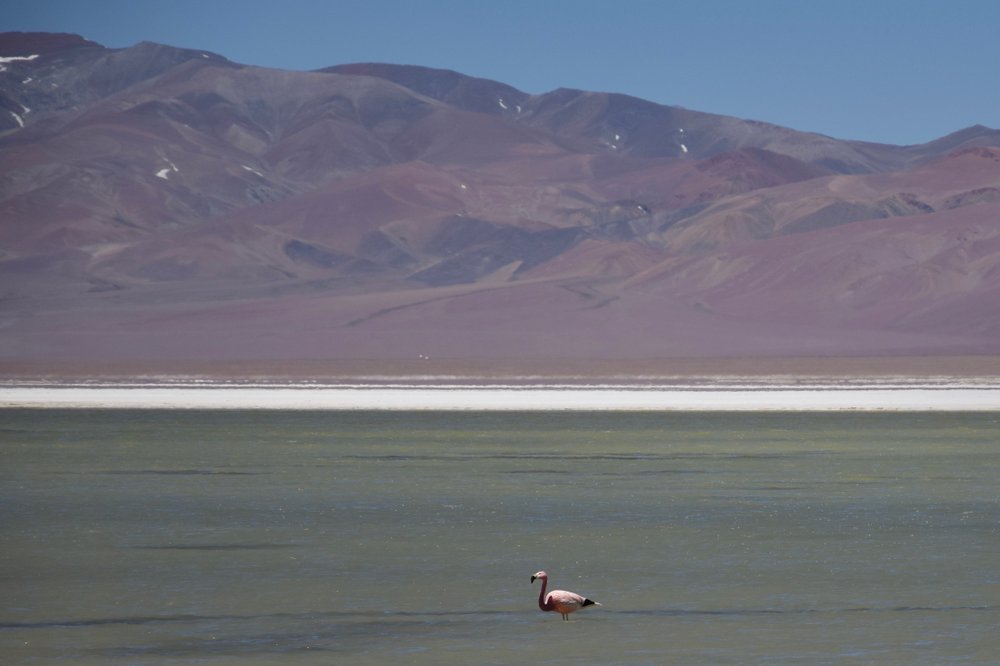 The Andean flamingo is one of the rarest flamingos in the world. (Photo by Mark Johanson via TNS/Chicago Tribune)

Walking the half-mile path down to the edge of the lagoon from the park’s small mountaineering lodge is an exhausting task. The thin air seems to age me 30 years, while the strong solar rays sap my energy and suck all humidity from my bulging eyes.

The way back to Copiapo that afternoon skirts the edge of the Salar de Maricunga, a blindingly white salt flat near the border with Argentina. It’s the southernmost salt flat in South America, and its bleached earth sits in stark contrast to the burnt-brown hills of the Altiplano.

It’s hard to imagine why this land of superlatives hasn’t yet caught on with tourists.