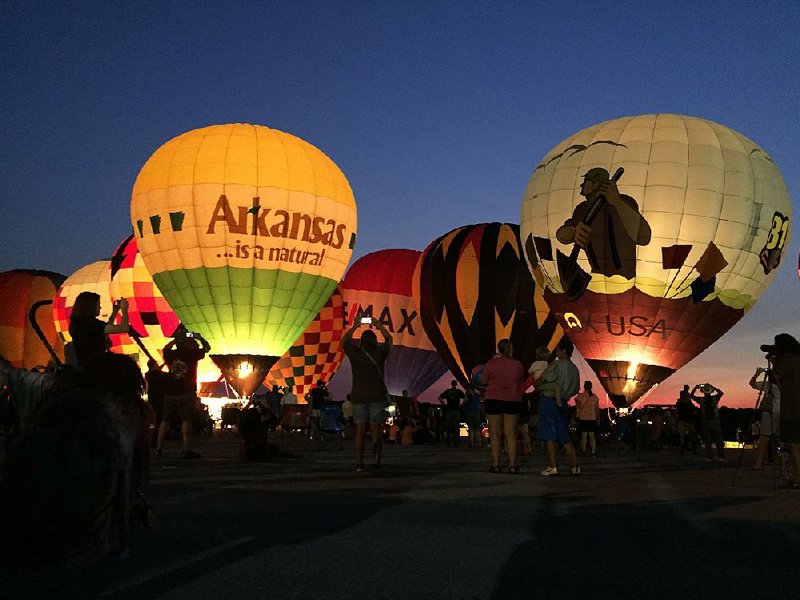 HARRISON -- Fire leapt from the burners of 11 hot-air balloons Friday night at Boone County Regional Airport and illuminated the "envelopes."

That's the official name for the fabric that holds the air. The main parts of a hot-air balloon are the envelope, burner and basket.

Some of the balloons at the airport were seven stories tall and emblazoned with words like "Arkansas ... is a natural."

The 24th annual Arkansas Hot Air Balloon State Championship began Friday with sky-diving in the late afternoon and a "balloon glow" at sundown.

During a balloon glow, each balloon team fires its burners at the same time, lighting up all the balloons.

The festival will continue through Sunday morning with flying competitions and events for public participation.

Matt Bell, executive director of the visitors bureau, said sky-diving is $500, helicopter rides are $20 and tethered balloon rides are $10. All of that depends on the weather cooperating. Balloons can't fly if it's too windy.

Renee Swanson, office manager for the visitors bureau, said some of the balloonists were local but others came from Georgia, Tennessee and Missouri.

She said there will be a $10,000 prize for the team that wins the "key grab," a competition in which a balloon is flown at least 2 miles to a particular pole. The pilot must reach over and remove a key from the pole and land safely with it.

There's also a $600 prize for the winner of a beanbag toss, Swanson said.

Mike Mills of Ponca said the night was in honor of Jim McCammon, a former Harrison firefighter who died of cancer in May.

Mills, a former state tourism director, has flown a balloon called Miss Arkansas for 35 years (although there have been four Miss Arkansas balloons during that time). McCammon was Mills' "chase captain" for about 28 of those years. He would follow the balloon in a land vehicle, and then on foot, grabbing the basket to help ensure that Mills landed safely.

Mills said he did 62 flights over a two-year period, and McCammon had his hand on Mills' basket before it touched the ground in each of those landings.

For the past five years, Mills' son-in-law, Austin Albers of Ponca has been the pilot of Miss Arkansas.

More information about the festival is available at arkansasballoonfest.com.