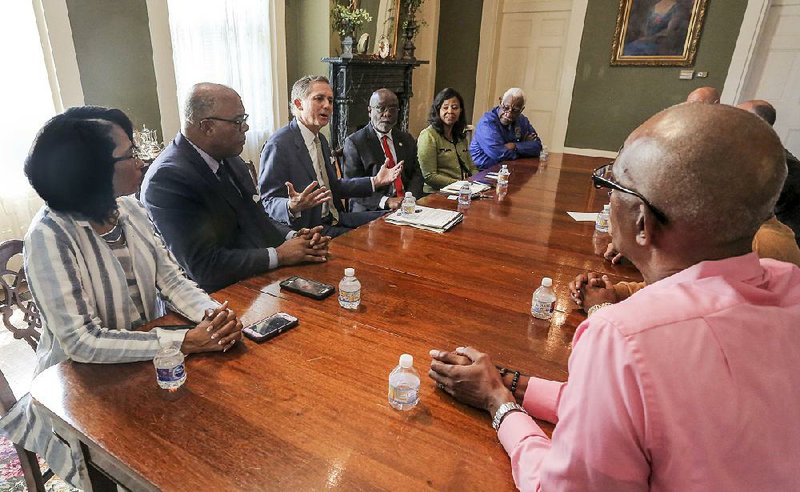 Drugs sent Terrance Knowlton to prison, but on Friday, a U.S. congressman and roomful of college administrators gave him an ovation.

Knowlton, 30, of Little Rock had just told the story of how classes at Shorter College had allowed him to successfully re-enter society after being released from prison.

It's people like Knowlton whom U.S. Rep. French Hill, a Republican from Little Rock, wants to help with a bill he plans to introduce when Congress reconvenes next week.

The Shift Back to Society Act would create a pilot program, allocating $5 million annually in Department of Justice grants for historically black colleges and universities to develop educational programs to help criminal offenders transition back into their communities.

Hill said historically black colleges and universities -- especially those in metropolitan areas -- are well-positioned to help those starting anew after stints in prison.

"They have faith-based and community-focused direction and desire to work in this arena," Hill said. "And they've got experience in it, typically, due to their faith-based missions or their work with the Pell Grant program previously."

The legislation would complement the Second-Chance Pell Grant and other state and federal programs that focus on education as a key component to reducing prison recidivism, Hill said.

The program offers Pell Grants to inmates, allowing colleges to offer some classes to them while they're incarcerated. North Little Rock's Shorter College is one of about five dozen colleges nationwide selected to participate in the pilot program from which Knowlton benefited.

Hill's legislation would be different because the grant money would be largely unrestricted, which he said would allow colleges to be innovative. Pell dollars must be spent on courses or programs that lead to a degree.

Stormy Cubb, who leads Shorter College's administration of the Second Chance Pell Grant, said that one of the key determinants of a student's success is "wrap-around services." Shorter College, for instance, assigns each student a "success coach" who keeps students accountable and helps them navigate through college both in and out of the classroom.

Hill noted that success coaches may be great candidates for grant funding from his bill. It was one of several ideas Hill said he pulled from Friday's roundtable with administrators of several historically black colleges and universities.

"This bill is critical because Pell Grant funds things that lead to a degree," said Jerome Green, Shorter College president. "Some students have needs for programs that don't lead to a degree."

Knowlton said the Second-Chance Pell Grant program had given him hope, and that Shorter faculty have gone to great lengths to make his re-entry into society successful.

"My life has been different ever since," he said, noting that he'll graduate with an associate degree in entrepreneurial business within a year.

Regina Favors, Arkansas Baptist College's interim president, said Knowlton's story and others like it underscore the need for "case management," which she said is key.

"We can educate cheaper than we can incarcerate," she said.

On Friday, the room full of administrators from central Arkansas' historically black colleges and universities agreed with Hill that their institutions were uniquely positioned to help inmates returning to their communities.

"Let's just be totally transparent," said Charles King, vice president for institutional advancement at Philander Smith College in Little Rock. "The reason that we're uniquely positioned is that the large number of African American men that are in prison are coming back to our neighborhoods in the middle of where we sit. We have no choice except to be involved in this. That's why it's critically important. These are sometimes the father and even sometimes the mothers of our students who are coming back. That positions us like no one else in the world."

Green, though, was quick to note that this isn't strictly a "black problem."

"This is a problem across society," he said.

Hill agreed, and he noted that this bill would fit in well with the Trump administration directive to direct more grant dollars to historically black colleges and universities.

Hill has introduced similar legislation in the past, and he acknowledged that getting legislation through Capitol Hill is difficult. This bill, he noted, counts U.S. Rep. Cedric Richmond, D-La., among a group of bipartisan co-sponsors. Richmond was past chairman of the Congressional Black Caucus.

"This is an arrow in the quiver," Hill said. "It's not the whole quiver."

Shortly after the roundtable, Hill participated in a discussion on north Asia diplomacy with U.S. Rep. Mark Takano, D-Calif., at the University of Arkansas Clinton School of Public Service.

The two congressmen said they were concerned about escalating tensions between South Korea and Japan. The partnerships among those countries and the U.S., they said, play a large role in the American government's posture toward China and North Korea.

Both were critical of the Trump administration's use of national security tariffs, saying those tariffs have made it more difficult for the U.S. to convince other countries to publicly pressure China on its trade practices.

The pair also discussed the U.S., Mexico and Canada trade agreement that is pending in the House of Representatives.

Takano said that he didn't think House Speaker Nancy Pelosi, D-Calif., would bring the agreement to the House floor for a vote anytime soon because some Democrats still oppose it.

Hill has criticized Pelosi for withholding the legislation from the floor, saying that it would pass on a floor vote with a coalition comprised of House Republicans and some House Democrats.