Over the past 10 years, more Arkansans left the state to get abortions than came to the state from elsewhere for the procedure, according to data compiled by The Associated Press.

About one in five abortions that Arkansans obtained in 2017 took place outside the state.

During the 10-year period included in the AP’s analysis, 5,060 people came to Arkansas for abortions from at least 17 states. Some states were listed as “unknown” in the data set.

Tennessee had the highest number of women — 2,332 — traveling to Arkansas for abortions.

Ali Taylor, co-founder and president of Arkansas Abortion Support Network, said people from Arkansas may be traveling to Tennessee specifically because it’s logistically closer to some parts of the state, and also because that state’s mandated waiting period is shorter.

She added that it’s not uncommon to see Tennessee license plates at Little Rock Family Planning Services, an abortion provider.

Over time, the number of Arkansas residents who traveled out of state for abortions — according to available data — varied without a clear pattern, ranging from at least 855 in 2012 to at least 305 in 2018.

However, notes on the AP’s methodology said some of the 2018 data were only preliminary findings.

At least 759 women from Arkansas obtained abortions in another state in 2017, relative to 2,877 Arkansans who had abortions in their home state.

That’s a slight increase in the percentage of women from Arkansas who traveled beyond state lines as compared with 2009 data, and is about 20% of the procedures.

Taylor called it “a significant amount,” and added that cases that require travel out of state — such as for abortions after 20 weeks of pregnancy, which is generally prohibited in Arkansas — can be “heartbreaking and difficult” for families.

The AP collected data on the total number of abortions, where women underwent the procedures and which states those women were from, based on data from the federal Centers for Disease Control and Prevention.

Reporting abortion numbers is voluntary, and data were not available for some states.

In line with national trends, abortions in Arkansas have decreased over the past decade.

A regional spokeswoman for Planned Parenthood Great Plains — which covers Arkansas, Kansas, Oklahoma and Missouri — said last week that its clinicians’ schedules did not allow for comment on the Arkansas data.

She said it was the organization’s general understanding that abortion procedures are on the decline overall in the U.S.

Responding to a 2018 Department of Health report reflecting declines in abortions in Arkansas, the Little Rock-based Family Council group — which opposes abortion — praised the trend.

“We’re glad the number of abortions is at historic lows. … Abortion is a terrible tragedy. That’s why we are committed to working to end abortion in Arkansas,” the group’s president, Jerry Cox, said in a statement in June.

Like those in many nearby states, Arkansas lawmakers have steadily moved to restrict abortion access in recent years.

With Missouri, Louisiana, Mississippi, Indiana and South Dakota, the state was one of six designated as “very hostile” to abortion in a recent analysis from Guttmacher Institute, a policy group that supports abortion rights.

At least nine new laws that affect abortion access in some way were passed during this year’s Arkansas legislative session.

Many of those laws — as well as regulations from previous years — are being sparred over in court, including three acts whose enforcement was blocked indefinitely by a federal judge last month.

The blocked rules include a ban on abortions after 18 weeks of pregnancy and because of suspected Down syndrome, as well as a law prohibiting providers who are not board-certified in obstetrics and gynecology from performing abortions.

Arkansas’ abortion provider network also is in flux as Planned Parenthood relocates its Northwest Arkansas clinic to a new location in that area.

In July, the health group announced the planned opening of a second Little Rock office, which will join its 12th Street site in providing medication abortion services, a spokeswoman said at that time. 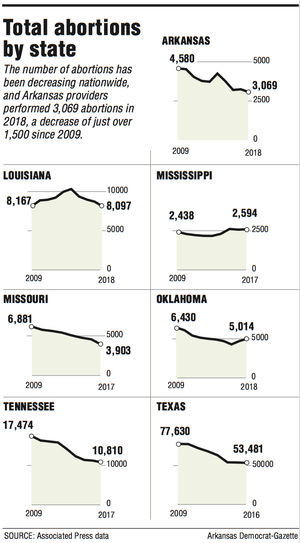