Iran boasts of work to enrich uranium to new levels 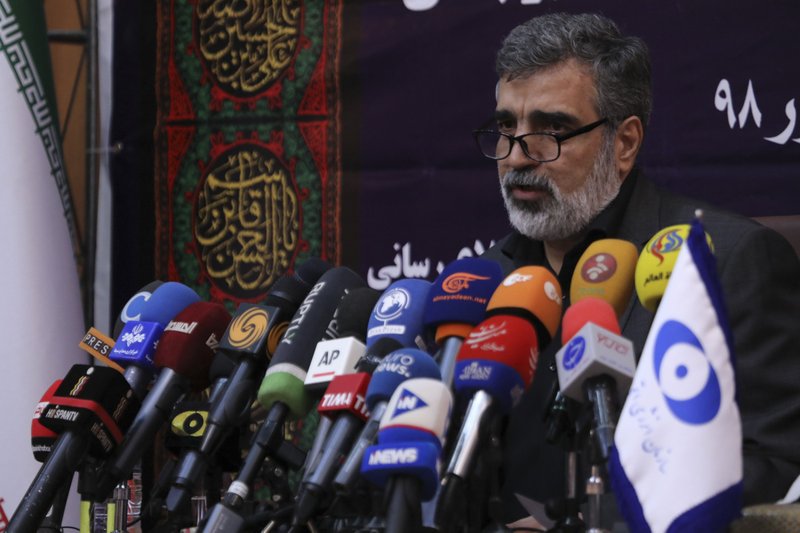 TEHRAN, Iran -- Iran said Saturday that it now uses arrays of advanced centrifuges prohibited by its 2015 nuclear deal and can enrich uranium "much more beyond" current levels to weapons-grade material, taking a third step away from the accord while warning that Europe has little time to offer it new terms.

While insisting Iran doesn't seek a nuclear weapon, the comments by Behrouz Kamalvandi of the Atomic Energy Organization of Iran threatened to push uranium enrichment far beyond levels ever reached in the country. Before the atomic deal, Iran had reached 20% enrichment, which is only a short technical step away from weapons-grade levels of 90%.

The move threatened to push tensions between Iran and the U.S. even higher more than a year after President Donald Trump unilaterally withdrew from the nuclear deal and imposed sanctions now crushing Iran's economy.

Separately, Iran acknowledged Saturday that it had seized another ship and detained 12 Filipino crewmen, while satellite images suggested an Iranian oil tanker once held by Gibraltar was now off the coast of Syria despite Tehran's promise that its oil wouldn't go there.

Speaking to journalists while flanked by advanced centrifuges, Kamalvandi said Iran has begun using an array of 20 IR-6 centrifuges and another 20 of IR-4 centrifuges. An IR-6 can produce enriched uranium 10 times as fast as an IR-1, Iranian officials say, while an IR-4 produces five times as fast.

The nuclear deal limited Iran to using only 5,060 first-generation IR-1 centrifuges to enrich uranium by rapidly spinning uranium hexafluoride gas. By starting up these advanced centrifuges, Iran further cuts into the one year that experts estimate Tehran would need to have enough material to build a nuclear weapon if it so chose.

"Under current circumstances, the Islamic Republic of Iran is capable of increasing its enriched uranium stockpile as well as its enrichment levels and that is not just limited to 20%," Kamalvandi said. "We are capable inside the country to increase the enrichment much more beyond that."

While Kamalvandi stressed that "the Islamic Republic is not after the bomb," he warned that Iran was running out of ways to stay in the accord.

"If Europeans want to make any decision, they should do it soon," he said.

France had floated a proposed $15 billion line of credit to allow Iran to sell its oil abroad despite U.S. sanctions.

Kamalvandi also said Iran would allow U.N. inspectors to continue to monitor sites in the country. A top official from the International Atomic Energy Agency was expected to meet with Iranian officials in Tehran today.

The agency said Saturday that it was aware of Iran's announcement and that "agency inspectors are on the ground in Iran and they will report any relevant activities to [agency] headquarters in Vienna." It did not elaborate.

"The Iranians are going to pursue what the Iranians have always intended to pursue," Esper said at a news conference with his French counterpart, Florence Parly.

Meanwhile on Saturday, Iranian state TV said a tugboat and its 12 crewmen were seized over suspicions that it was smuggling diesel fuel near the Strait of Hormuz. The report did not elaborate. In Manila, the Philippines' Department of Foreign Affairs said it was checking details of the reported seizure.

Also Saturday, satellite images showed a once-detained Iranian oil tanker pursued by the U.S. appears to be off the coast of Syria, where Tehran reportedly promised the vessel would not go when authorities in Gibraltar agreed to release it several weeks ago.

Images obtained by The Associated Press from Maxar Technologies appeared to show the Adrian Darya-1, formerly known as the Grace-1, some 2 nautical miles off Syria's coast.

Iranian and Syrian officials have not acknowledged the vessel's presence there. Authorities in Tehran said earlier that the 2.1 million barrels of crude oil onboard had been sold to an unnamed buyer. That oil is worth about $130 million on the global market, but it remains unclear who would buy the oil as the buyer would face the threat of U.S. sanctions.

Information for this article was contributed by Robert Burns, David Rising and Jim Gomez of The Associated Press.