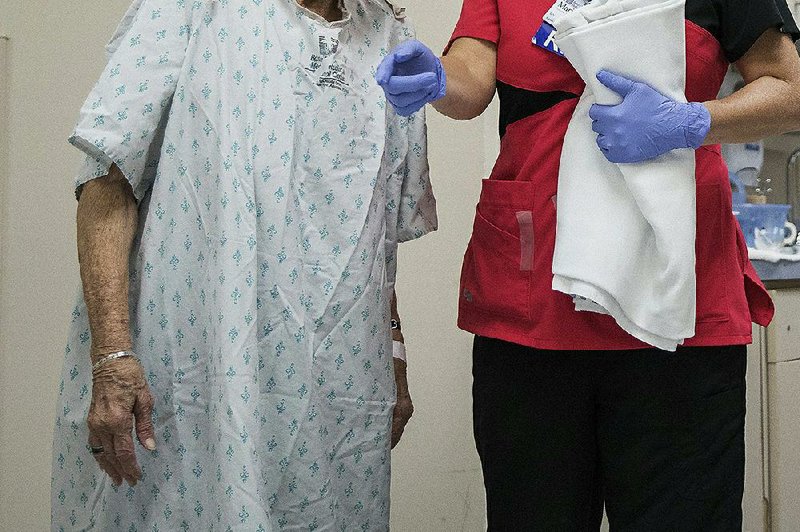 A nurse prepares a patient for a CT scan in Mountain Home in 2017. The number of people in Arkansas without health insurance rose by about 12,000 from 2017-18, census figures show. The increase follows a national trend.

WASHINGTON -- The proportion of Americans without health insurance grew last year for the first time since the Patient Protection and Affordable Care Act was approved in 2010, according to new federal figures that show the number of people lacking coverage rose to 27.5 million.

About 8.5% of the population lacked health insurance for all of 2018, up from 7.9% the year before, the Census Bureau reported Tuesday. Experts said the increase was at least partly the result of efforts by President Donald Trump's administration to undermine the health care law.

The change was driven primarily by a decrease in public insurance for the poor, with enrollment in Medicaid dropping by 0.7%, according to data from a Census Bureau survey that measures Americans' well-being.

In Arkansas, the number of people who lack insurance increased from an estimated 232,000 to 244,000 people. That represented an increase from 7.9% of the state's population in 2017 to 8.2% in 2018. The estimates in each year had a margin of error of plus or minus 10,000 people, however, and the increase wasn't considered to be statistically significant.

Nationally, the growth in the ranks of the uninsured was seen as particularly striking because the economy is doing well. The same report showed that the share of Americans living in poverty fell to 11.8%, the lowest level since 2001. Median household income was $63,200, essentially unchanged from a year earlier after adjusting for inflation but significantly above where it was during the recession.

Health insurance has long been recognized as crucial to people's ability to get medical care when they need it. The availability of insurance is influenced by a variety of factors, including economic conditions, as most insured U.S. residents get their health plans through their employers. In recent years, however, supporters and opponents of the health care law have looked at the Census Bureau's yearly insurance data as a portrait of how well the law is working.

Expanding access to insurance was a main goal of the Affordable Care Act, the statute forged by Democrats nearly a decade ago that has reshaped much of the health care system. Trump and other Republicans contend that the law is fatally flawed, while Democrats maintain that it has been undermined by recent GOP policies.

Historically, health insurance coverage has tended to increase when the economy grows, since most Americans get health plans through employers. Indeed, before 2018, the uninsured rate had not risen in any year since 2008.

"In a period of continued economic growth, continued job growth, you would certainly hope that you wouldn't be going backward when it comes to insurance coverage," said Sharon Parrott, senior vice president at the Center on Budget and Policy Priorities, a liberal think tank.

But Loretta Alexander, health policy director with Arkansas Advocates for Children and Families, said some people who had been receiving Medicaid or other public assistance may find they can't afford the coverage offered by their employer when they get jobs.

"The government wants you to believe that the unemployment rate is just so low that everybody's getting off of Medicaid and going and getting jobs and getting insurance, but when you look at the numbers that's really not what's being shown," she said.

The drop in insurance coverage in 2018 is relatively small compared with the long-term trend, but it suggests that policy changes under the Trump administration have made a difference.

The Affordable Care Act established new insurance markets and financial assistance for millions of Americans who had previously struggled to obtain coverage. But the Trump administration cut back on advertising and enrollment assistance that helped low-income people learn about the insurance programs, among other changes.

The government also announced that it might begin counting Medicaid enrollment as a strike against foreigners who are seeking green cards or citizenship -- a policy that was finalized this year. Insurance coverage for Americans of Hispanic origin fell last year, according to the report.

The administration's decision in 2017 to eliminate a subsidy program contributed to price increases in the insurance marketplaces in many parts of the country the following year. Research from the Department of Health and Human Services shows that more than 1 million Americans who were previously buying their own insurance left the markets in 2018.

But the Census Bureau figures show that the main change in the uninsured rate came from declines in Medicaid coverage. Urged by the administration, which expressed concerns about the program's integrity, several states started asking families to prove their eligibility for Medicaid more often in 2018. The number of Americans covered by Medicaid and the Children's Health Insurance Program fell by more than 1.6 million last year, according to administrative data.

"The way they are doing this seems clearly designed to throw people off this program," said Eliot Fishman, a senior director at the consumer group Families USA and a former top Medicaid official in President Barack Obama's administration. Fishman said he was particularly disheartened to see declines in the number of children with health insurance.

Brian Blase, a former special assistant to Trump for health care policy, said he's not surprised to see enrollment in Medicaid fall. He pointed to a recent study suggesting that some Americans who had enrolled in the program in the early years of the Affordable Care Act were not in fact eligible for it. "My sense is in 2018 states probably started tightening eligibility," said Blase, who is now president of the consulting and research firm Blase Policy Strategies.

Additionally, Congress as part of its 2017 tax law abolished the Affordable Care Act's so-called individual mandate, which required most Americans to obtain health insurance or pay a fine. Technically, the change did not kick in until this year. But analysts believe publicity about the provision may have led fewer people to seek coverage.

On poverty and household incomes, Tuesday's report showed the benefits of what now ranks as the longest economic expansion on record, though it also highlighted the limitations of that growth.

Income gains have slowed since Obama's final years in office. Median income grew 5.1% in 2015 and 3.1% in 2016, compared with less than 1% last year. And median household income is only modestly higher now than when the recession began in late 2007.

David Howell, a professor of economics and public policy at the New School in New York, said economic growth in recent years has helped families recover from the recession but has done little to reverse the longer-run stagnation in middle-class incomes. Democrats and Republicans alike, he said, have tapped into the sense among many voters that the economy is not working for them.

"If you look at the long-run trajectory from 1979, it's pretty disastrous," Howell said.

While the income gains have slowed substantially as the economic expansion has matured, experts say the tepid progress in top-line numbers hides positive trends under the surface.

"You continue to see some progress for households in 2018, especially in the bottom of the income distribution as they benefited from a tighter economy," said Jason Furman, who was chairman of Obama's Council of Economic Advisers. "But the pace of that progress seems to have slowed relative to past years."

Median household income, the level at which half of households make more money and half make less, rose to about $63,200 in 2018 from $62,600 the previous year. The change was so small that it was not considered statistically significant. The Census Bureau made major tweaks to its methodology in 2013, making comparisons to earlier years difficult.

Some of the pullback in income gains was expected. Increases earlier in the recovery were driven by people returning to work. For example, households where only one person worked outside the home might have become two-earner homes.

Now, with the unemployment rate near a five-decade low, household income gains must rely more heavily on raises for existing employees, said Ernie Tedeschi, an economist at Evercore ISI.

At an individual level, pay did climb by some measures. Among full-time, year-round workers, inflation-adjusted earnings rose more than 3% for both men and women.

And as some workers take home bigger paychecks, it is helping to even out inequality, if only slightly. Incomes grew more for poorer households last year, adjusting for household size. And the black poverty rate was the lowest ever reported -- though it is still more than double the white poverty rate.

Altogether, there were 38 million people living in poverty. The poverty rate has fallen relatively steadily since 2010, when it topped 15%. Among children, the poverty rate was 16.2%, also down from 2017.

The Trump administration applauded that progress.

Pro-worker policies are "unleashing the private sector and achieving historical gains for the most disadvantaged Americans," Tomas J. Philipson, acting chairman of the White House Council of Economic Advisers, said in a statement.

But a broader measure that is often preferred by economists tells a less positive story. The headline poverty figures count the number of people living in households that earn below a certain threshold: about $20,000 for a family of three in 2018.

A supplementary poverty rate, which takes into account regional differences in cost of living and government benefits such as housing assistance and the earned-income tax credit, was 13.1% in 2018, little changed from 2017. More senior citizens and fewer children are poor under that measure.

Government programs, particularly Social Security, the earned-income tax credit and the nutrition-assistance program formerly known as food stamps, kept tens of millions of people out of poverty, the report noted.

Information for this article was contributed by Margot Sanger-Katz, Ben Casselman and Jeanna Smialek of The New York Times; by Amy Goldstein of The Washington Post; and by Andy Davis of the Arkansas Democrat-Gazette.