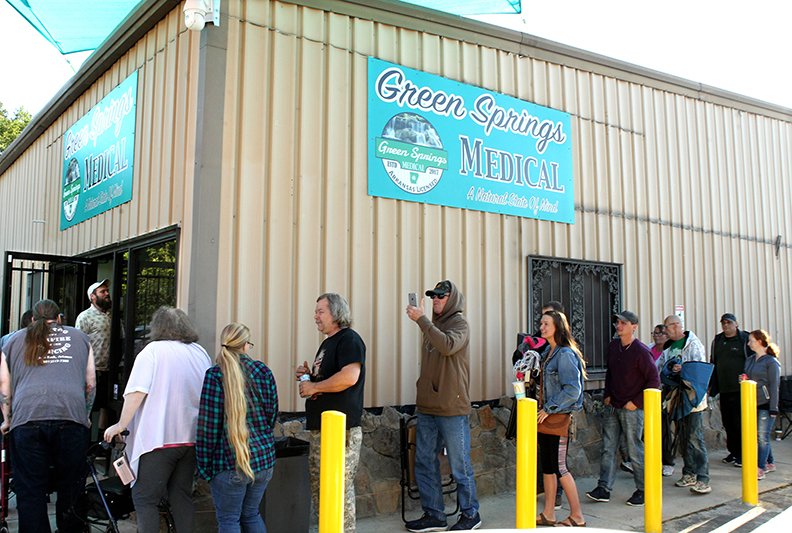 The Sentinel-Record/Richard Rasmussen GREEN SPRINGS: About 70 people were in line outside Green Springs Medical on Seneca Street when it opened for its first day of business shortly after 8 a.m. on May 13. One of the principals in Hot Springs' only medical marijuana dispensary alleged his partner violated rules and regulations promulgated by the oversight panel for the state's newest industry, according to a lawsuit filed Monday in Garland County Circuit Court.

HOT SPRINGS -- One of the principals in Hot Springs' only medical marijuana dispensary has alleged that his partner violated rules and regulations of the oversight panel for the state's newest industry, according to a lawsuit filed last week in Garland County Circuit Court.

The complaint that Bruce Simpson filed against Dragan Vicentic said Vicentic has "systematically and continuously" defied Medical Marijuana Commission directives and hasn't operated the company in accordance with the dispensary license application he submitted to the commission.

The two Hot Springs-area residents opened Green Springs Medical in May, becoming one of the first of 32 licensees to legally sell marijuana in Arkansas. Through Thursday, the 309 Seneca St. location had sold 464.61 pounds of medical marijuana since opening May 12, according to sales figures released by the state Department of Finance and Administration.

The amount sold accounts for more than a third of the 1,275 pounds sold statewide. Total sales through Thursday for the eight dispensaries in operation reached $9.1 million, the Department of Finance and Administration said. The state tax code prohibits the disclosure of revenue figures generated by an individual dispensary, the agency said.

The application Simpson included with the complaint listed Vicentic's ownership stake as Green Springs' CEO/chairman at 60%. Simpson, listed as security manager/vice chairman, has a 40% stake, but the complaint said Vicentic has refused to pay him.

Simpson has been banned from the property since he declined Vicentic's buyout offer in June, the complaint said, and wasn't notified about Vicentic's attempt to petition the commission for a change in ownership.

The Department of Finance and Administration confirmed that Vicentic had contacted the agency regarding a change of ownership request. The agency's Alcoholic Beverage Control Division Director Doralee Chandler informed him in an Aug. 6 email that he needed Simpson's consent to change the ownership structure.

"The commission does not get involved in ownership disputes, but you have to establish for their approval that the ownership changes are consensual by all parties or that it has been resolved by judicial matters if it is not," she said. "There were no documents showing that your partner, listed on the [Medical Marijuana Commission] application, has consented to moving on."

Vicentic subsequently told Chandler to pull his request from the commission's agenda.

The Department of Finance and Administration, citing an exemption that the Legislature added to the state's Freedom of Information Act this year, said it couldn't confirm or deny if it has received any complaints or opened an investigation into the claims Simpson alleged in the complaint. Act 568 exempts undisclosed and ongoing Alcoholic Beverage Control investigations from public records requests.

In addition to not distributing profits in accordance with the ownership percentages listed on the application, the complaint alleged that Vicentic dismissed two Green Springs board members, receives an additional 5% of the profits for his role as sales manager, and purchases other products for the dispensary at inflated prices from his other businesses.

Vicentic said Friday in an email that Simpson's claims have no basis.

"Mr. Simpson did not live up to his part of the deal with Green Springs, and his toxic attitude towards patients made us mutually agree that he depart Green Springs," he said. "I have no idea what his play is with the complaint against Green Springs Medical LLC, but I am sure a judge will see through the smoke screen."

Simpson declined to comment on the lawsuit when he was reached by phone Friday, but he said he plans to comment in the future.

He's asked the court for relief that includes compelling Vicentic to account for all receipts to and disbursements from the company, distribute all profits equally, provide Simpson with his capital investment in the enterprise, and allow him access to the property and company records.