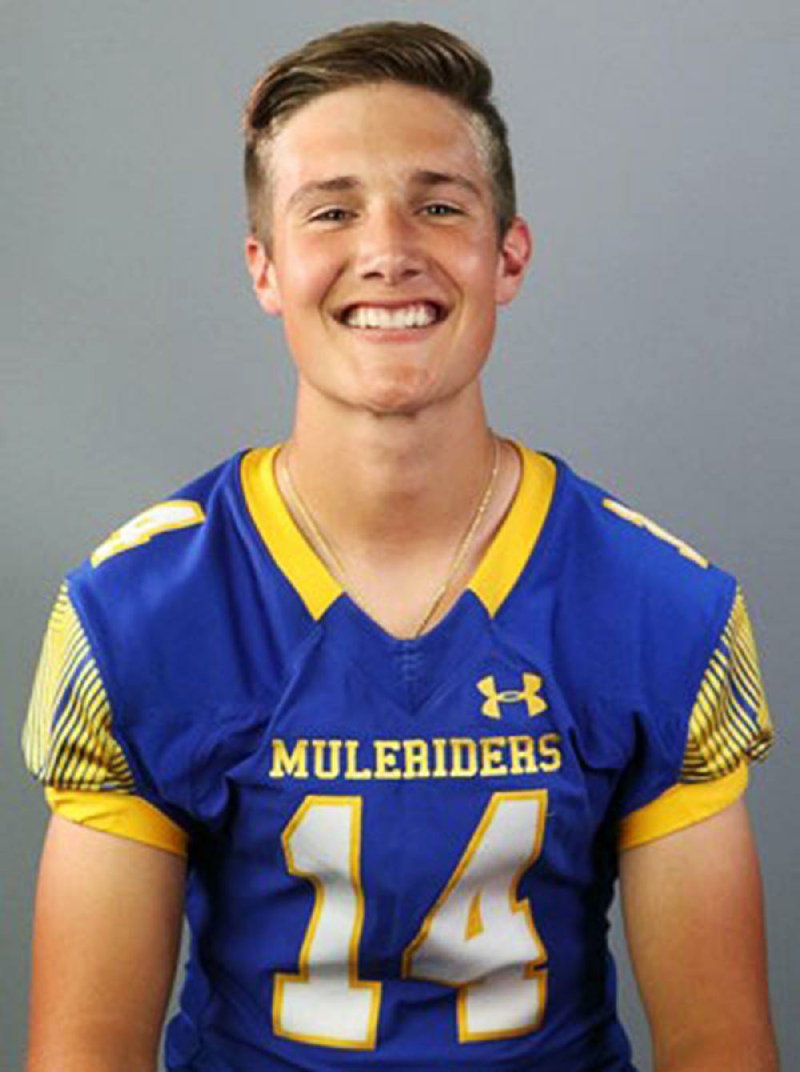 The ball floated in the hot, muggy Magnolia air for no more than 4 or 5 seconds Saturday night.

It felt like an eternity to Southern Arkansas University sophomore kicker Austin Wilkerson.

"It was definitely the longest few seconds of my life," Wilkerson said, recalling how his 48-yard, game-winning field-goal attempt floated toward the north end zone at Wilkins Stadium. "It was in the air for a long time."

Wilkerson, watching intently with his hands on his knees, said he never saw the referees hoist their arms into the air.

Muleriders holder Jared Lancaster grabbed Wilkerson around the waist and lifted him into the air to celebrate SAU's 30-28 victory over Oklahoma Baptist.

"I assumed it was through," said Wilkerson, somehow escaping an ensuing victory dog pile. "I was looking at them, giggling."

SAU Coach Bill Keopple, too old for dog piles, watched on the sidelines.

But the Muleriders, with all three timeouts remaining, drove across midfield, and Keopple said he told Wilkerson to get ready to win the game.

Wilkerson never got a chance -- at that moment -- as quarterback Hayden Mallory was intercepted by Oklahoma Baptist's Myles Russell, giving the Bison the ball at its 30 with the lead with 51 seconds left.

"To be honest, I didn't give up completely," Wilkerson said. "But the stress had gone away."

Wilkerson said his stress level returned when SAU got the ball back at its 13 with 31 seconds to play, and increased when Mallory hit SirCharles Perkins out of the backfield for a 6-yard gain with four seconds left at the Bison 31.

"I could hardly breathe," he said.

"That really helped me," Wilkerson said, explaining that he stood off to the side as his teammates huddled. "I just thought to myself, 'This is what I do in practice. This is what I do.' "

Wilkerson said he has watched video of the kick on ncaa.com about 30 times, a play that has been recognized No. 1 among Division II highlights in Week 2.

"That's the moment we fantasize about," said Wilkerson, the Great American Conference Special Teams Player of the Week. "The celebration really lasted a few days."

Batie led Harding with 12 tackles, 11 unassisted, including a tackle-for-loss to force OBU into a third and 15 late in the fourth quarter.

But Batie, a junior from Troy, Ala., was called for pass interference two plays later on a fourth-and-15 play at the Harding 21.

The penalty gave Ouachita a first down and set up Gabe Goodman's 38-yard game-winning field goal.

"When we came back to practice on that Monday, I knew I had to redeem myself," Batie said, "and that's what I did."

Batie, with 2 interceptions and 152 yards in return yardage, nearly matched the total offense output of the University of Arkansas-Monticello (158 yards) in Harding's 24-0 victory.

His interception was returned 75 yards for a touchdown to give Harding a 13-0 lead midway in the first quarter.

Batie's second interception, right before halftime, was returned 77 yards to the UAM 6 and set up a 23-yard field goal to give Harding a 24-0 lead.

Harding Coach Paul Simmons said it was a testament to the will and skill of Batie, the GAC's Defensive Player of the Week, that he could bounce back the way did.

"There are some kids who are going to sit around and feel sorry for themselves," Simmons said, "that's not Cory. He's ready to roll all the time."

Quarterback Richard Stammetti and wide receiver L'liott Curry have gotten most of the publicity for Henderson State, each earning Offensive Player of the Week honors during the season's first two weeks.

But tight end Preston Jefferis, a redshirt sophomore from Aledo, Texas, has caught 3 passes for 78 yards, with two 33-yard TD receptions, one in each game.

"We need to get him the ball more," Henderson Coach Scott Maxfield said. "He's got some ability."

Ouachita Baptist quarterback Brayden Brazeal doesn't rank among the nation's leaders in passing yardage or touchdowns, but the redshirt sophomore from England leads the GAC and Division II with a completion percentage of .800.

"He's playing like a real seasoned veteran," OBU Coach Todd Knight said of Brazeal, who is 28 for 35 for 385 yards with 3 touchdowns and zero interceptions. "He's doing a great job."

Henderson State, 5-6 last season, is showing signs of being more like the team that posted a 31-3 GAC record and made two trips to the Division II playoffs from 2013-15.

Stammetti and Curry rank atop the GAC and are all over the Division II top 10 after two weeks, bringing back memories of players like Kevin Rodgers, the state's all-time leading passer, and wide receivers Darius Davis and Robert Jordan.

Ouachita Baptist (2-0) remains at No. 6 in the AFCA Top 25 and is No. 4 in the D2Football.com poll after its 42-13 victory over Arkansas Tech. ... Harding (1-1) dropped from 22nd to 23rd in the AFCA poll and stayed at No. 21 in the media poll after defeating UAM 24-0. ... Southern Arkansas' 30-28 victory over Oklahoma Baptist gives the Muleriders a 17-game winning streak at Wilkins Field, tied for the longest in Division II with defending national champion Valdosta State. ... Harding leads the GAC and ranks No. 9 in the nation averaging 281.5 rushing yards per game. ... Ouachita senior wideout Allie Freeman (18) is second in the GAC to Henderson's L'liott Curry (20) in pass receptions. ... Harding's Tristan Tucker (192), along with SAU's KorDavion Washington (189) and SirCharles Perkins (173) rank 2-3-4 in rushing.