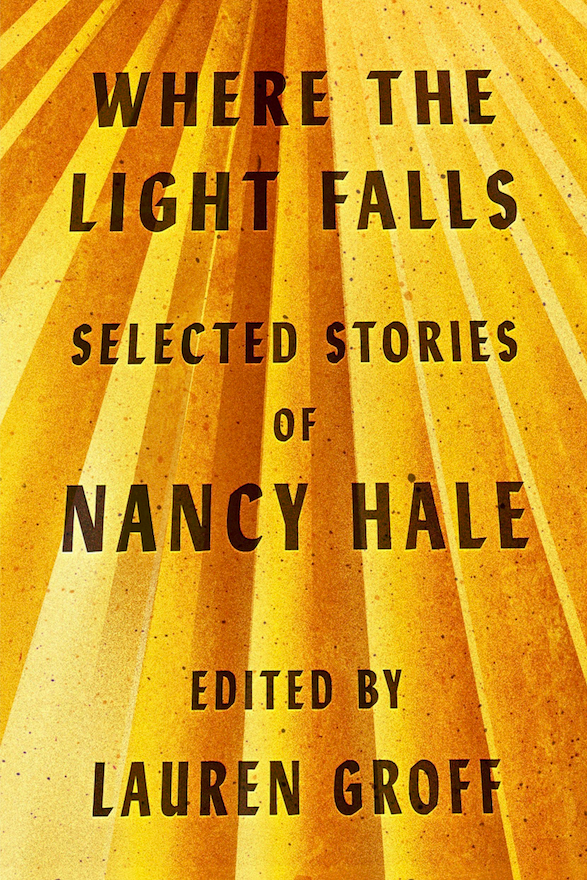 I had no idea about Nancy Hale.

Her name was vaguely familiar; I thought of her as one of those writers who was famous for a while and is, probably deservedly, nearly completely forgotten now. In the '30s and '40s, she was well-received by the public and widely praised by critics, some of whom expected her to become one of the canonical writers of her time.

She wrote a lot of short stories. Her best-known novel, 1943's The Prodigal Woman, had about it a scent of scandal that propelled it onto the best-seller lists. I remember a copy of it on some great-aunt's shelf.

I consigned her to a sunken place along with the likes of Lloyd C. Douglas, Kathleen Winsor and Jean Rhys, other writers I never read but assumed I had figured out. I imagined her work was thoroughly middlebrow, the sort of competent and smart writer more likely to flatter readers than challenge them.

After reading Where the Light Falls: Selected Stories of Nancy Hale (Library of America, $26), which will be in bookstores Tuesday, I doubt I've ever been so wrong about a writer. Hale is simply a force, a steelier Scott Fitzgerald who wrote sex-haunted stories about the interior lives of upper-class women in such calm, detached voice so sharp it's only later you understand how deep she drew her razor.

"I specialize in women, because they are so mysterious to me," Hale told The New Yorker in 1942. "I feel that I know men quite thoroughly, that I know how, in a given situation, a man is apt to react. But women puzzle me."

When I got an advance copy of Where the Light Falls I opened it at random to "A Place to Hide In," a five-page character sketch of a well-to-do bachelor, the ingenuous narrator's Uncle Paul, who is a bit too sensitive to survive an unfiltered world but rich enough to sustain a genteel lifestyle that includes a big country house of his own design with a cook who cooks "very good food" and a gardener to help him maintain the grounds and garden. While he studied architecture in Paris, the house was his only design ever to be realized.

"He had enough money, so he never needed to work, and he just lived there in his nice house that exactly suited him."

Uncle Paul is kind. The narrator writes she "used to think my Uncle Paul had the best life of any one I had ever heard of. He had been born just at the right time to be out of any bad trouble in the world. He had never married anybody and he lived alone in just the way that he chose and he did not have to work or be with people except when he asked them to come. He was very shy and I understood about that."

After Uncle Paul develops heart trouble, Dr. Alexander moves into the house with him. The narrator grows up; she does not see Uncle Paul for a long time:

"Once, though, I went to lunch there again when I was visiting at home. It was different. It did not seem to be Uncle Paul's house anymore but to belong to Dr. Alexander. Dr. Alexander was a sociable man and he did all the talking at lunch and my Uncle Paul sat silent."

About a year later, Uncle Paul dies, screaming from an after-dinner heart attack. He leaves all his money to Dr. Alexander.

That story was all it took. I was devastated.

And all of the stories are like that; depth charges blooming silently, shaking your core.

How could we not have known about her? Lauren Groff, the novelist who edited and wrote an introduction for this volume, is described in a post on the Library of America's website as "a recent convert."

"[I]t makes me riotously angry that such a brilliant and important writer as Nancy Hale could fall out of public consciousness," Groff writes. "Over these months of living with Hale's voice in my head, I have asked myself over and over how we could have turned our eyes from her, and I find I have ... a few hypotheses.

"These include internalized misogyny and the quiet, deadly, constant devaluing of women's work; the sheer quantity of her stories, some of the later and more purely autobiographical of which do feel a bit slight and sweet ... the fact that ... Hale's aristocratic Boston lineage and her later adopted role as a Southern gentlewoman unfairly lend to her imagined person a stale, old-fashioned whiff of dust and starch ... the false presumption that the short story form ... is a lesser creature than the novel ...."

All that. It is though a new continent, teeming with strange life and color, has been discovered. We need to explore it.