WATCH YOUR LANGUAGE! Spellcheck needs check after it's done checking 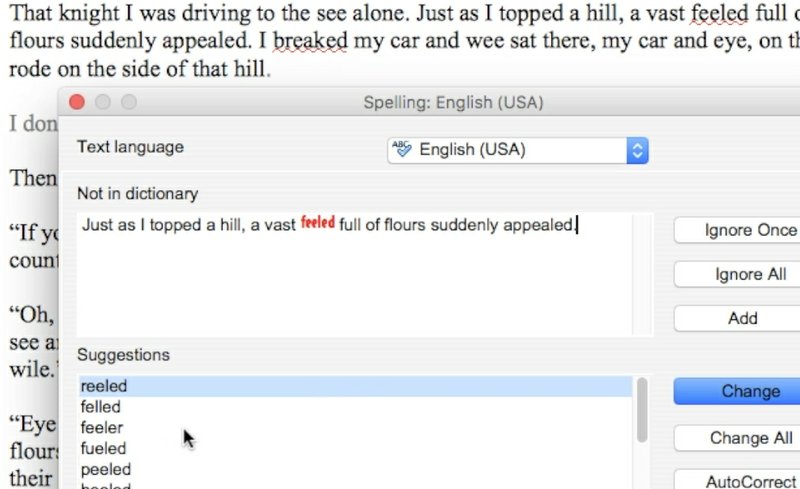 I truly have never been a fan of spellchecker. It's that function that checks behind you when you're writing a work document or even the Great American Novel. But it's unwise to believe that a spellchecked document is a perfect document.

The No. 1 reason for this is homonyms, words that sound the same as each other but have different meanings and are often spelled differently.

Some of these unchecked misspellings are merely unfortunate:

■ Capitol (the building) instead of capital (the city)

■ Weather (how it feels outside) versus whether (if)

■ Affect (the verb) rather than effect (the noun)

■ Air (that you breathe) and heir (who inherits from you)

A favorite error I found in an article lately involved "chic" clothing. The writer listed impressive things to wear when you're relaxing poolside. He suggested something casual but "sheik." I don't think the writer was pushing robes worn by Arab tribal leaders. His spellchecker did not serve him well.

But other spellchecker misses are embarrassing for other reasons.

Some writers confuse "prostrate" and "prostate." The prostate is, of course, a gland that only men have. The verb "prostrate" means to lie facedown and stretched out. Spellcheck won't catch this. Imagine the embarrassment when the poster came out proclaiming it was "National Prostrate Awareness Month." Maybe some people thought it was a yoga thing?

In my decades of work for newspapers and editing local and community news, I can affirm that the worst thing I caught nearly weekly was the use of the word "pubic" when the word "public" (as in school, meeting, notice, official) was intended. The number of times the incorrect word made it through spellchecker is truly alarming.

Some people call mistakes caused by a spellchecker's autocorrect function "Cupertinos." The origin of this is that when writers misspell "cooperation" as "coopertino," spellcheck seeks to change it to "Cupertino." (If you've heard of Cupertino, Calif., it might be because it's the headquarters for computer giant Apple.)

You'll find so many examples of Cupertinos. From one newspaper, a story mentioned that the three kings brought gifts to baby Jesus: "golf, frankincense and myrrh."

And in one, the public official was described as using "self-defecating humor."

A story mentioned a pro-government group in Karachi, Pakistan, called Muttahida Qaumi. Now, if I had to include that name in any document, I'd probably check it a half-dozen times. In fact, just for this column, I noticed it's sometimes spelled Qaumi and other times Quami. Spellcheck, though, corrected it to Muttonhead Quail. Because Muttonhead Quail makes more sense? Hmm.

Some of the suggested corrections from spellcheck are downright nuts.

I spellchecked a recipe that contained "ground guajillo chile." Spellcheck suggested that chile should be Chile (the country), chili (the dish with beans and/or meat) and child (a young person).

Does it make sense that I would really mean a ground country or child?

Another story was about a church official's extravagant lifestyle. He stayed at a hotel in Positano, Italy, called Le Sirenuse. Spellcheck wondered whether it should be "siren use." What, exactly, is siren use? Do police officers engage in siren use?

A New Yorker article mentioned Thomas Houseago, a British artist. Loony spellcheck suggested that it should say "house ago." What?

And one last story had the phrase "NASA footage." Spellcheck suggested "nasal footage." Imagine choosing a documentary on Netflix that promised NASA footage, only to get one that contained nasal footage. That's just wrong.

So go ahead and use spellcheck, but check behind it carefully.

I found some fun word combinations recently that were unrelated to spellcheck.

One recipe told me to "combine together" the first six ingredients listed. Combining the ingredients apart would be difficult.

One article recommended that people join together for a cause. That is so much easier than joining apart.

An ad boasted about an "added bonus." That's what a bonus is: something added.

And one person mentioned that something could be accomplished "in a matter of minutes." That's a long phrase that should be shortened to "in minutes."

One reader asked about the difference between "reared" and "raised."

Many people say you raise crops and farm animals, but you rear children. I found three noted word people who say it's OK to say that children are raised: Bill Walsh, Paul Brians and Theodore Bernstein.

The AP Stylebook offers guidance, too. It says: "Only humans may be reared. All living things, including humans, may be raised."