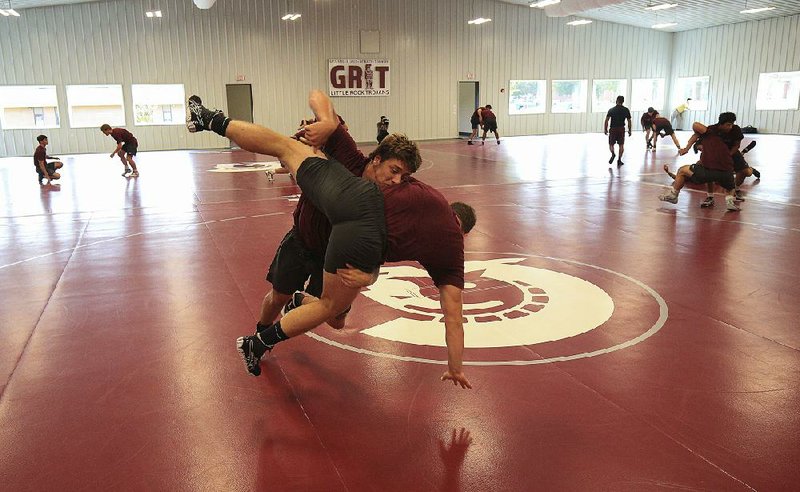 Members of the UALR wrestling team work out at the Greg Hatcher Wrestling Center in Little Rock for the first time Tuesday. The center will host its grand opening at 5:30 p.m. today. For more photos, go to arkansasonline.com/925wrestling. ( Arkansas Democrat-Gazette / Staton Breidenthal)

Conner Ward was a four-time state finalist and 2018 Kansas state wrestling champion for Mill Valley High School. He finished his prep career with an overall record of 153-16, including 31 pins.

Ward was also the first wrestler to commit to the University of Arkansas at Little Rock.

On Tuesday, Ward got to experience another first, as he and his Trojans teammates got to work out in the Greg Hatcher Wrestling Center, a $1.4 million facility that will house the state's first NCAA Division I college wrestling program.

"The appeal was the vision that everyone had, to start something new and to be a part of something not very many people get to be a part of," Ward said. "This is awesome. It's the best facility in the country I think."

The center will hold its official grand opening at 5:30 p.m. today. It will be open to the public.

While there is plenty of excitement for the fledgling program, there is not a lot of experience. Of the 26 on the roster, 19 are listed as freshmen or redshirt freshmen.

"This is new," Trojans Coach Neil Erisman said. "No one knows what to expect. I think the excitement is super high right now because of that. Once they know what's going on, I don't know if it will be this high. It will be this high when we start doing great things."

Erisman's passion for the sport has been a big draw for many of his recruits.

"My No. 1 thing was Coach Neil," said Jose Champagne, a junior transfer from the University of Minnesota. "He's a great guy, and he sold it to me. He told us, 'You get to shape the culture of the program and you get to build your own legacy.' I like hearing that kind of stuff."

Erisman was hired as the Trojans head coach on June 20, 2018. He wrestled for Oklahoma State and spent 2015-18 as an assistant at the University of North Carolina.

"I became interested in coming here the day I learned he was hired," Ward said. "He grew up 10 minutes from me, and I've followed his career closely. He was one of the top reasons I'm here now."

Erisman's selling point for the program was that the recruits would be a part of the ground floor of what could be something special.

"You have to believe in being the first: First all-American, first national champion, first to graduate," Erisman said. "They've had to buy in to being the cornerstone of a great program. You can go other places and follow other people's paths but here you can cut your own, be unique, be yourself and be a Trojan."

Junior Paul Bianchi has the most impressive resume of any of the new Trojans. While a redshirt freshman at North Dakota State, Bianchi became a Division I national qualifier.

"That was crazy," Bianchi said. "There were so many people in the stands for every single round. In the first round of the consolation bracket, you wouldn't think there would be 18,000 people in the stands, but they were. Almost every seat was filled."

As a three-time Wisconsin high school state champion, Bianchi recorded a 104-0 record at Two Rivers High School. He decided to transfer to UALR after his younger brother -- Joseph -- committed to the Trojans.

"That helped sparked an ideal into my mind about being a part of a new program," Paul Bianchi said. "It's really cool because you're the first of everything."

Erisman and assistant coach Javier Maldonado have encouraged the team to bond with team lunches and community activities. Erisman said all 26 of the team members have already accumulated at least 20 hours of community service.

"Wrestling is a very personal intimate sport," Erisman said. "You're fighting another human being, so emotions run high. But one good thing is that they have each other's back. We've done a lot of different things to create that culture."

A member of the Pac-12 Conference, UALR will begin its season in late November. The Pac-12 Wrestling Championships will be held March 6-7 at Stanford.

Keeping the excitement level high for wrestling throughout the season will be a challenge Erisman said.

"It will die off a little bit," Erisman said. "But wrestling is like a drug: Once it gets into your veins, you're hooked. As long as we get a lot of people hooked in the beginning, I think the excitement will stay this high." 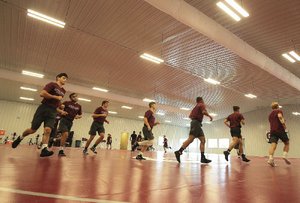 Photo by Staton Breidenthal
Members of the UALR wrestling team work out for the first time Tuesday in the Greg Hatcher Wrestling Center. More photos online at arkansasonline.com/925wrestling/.