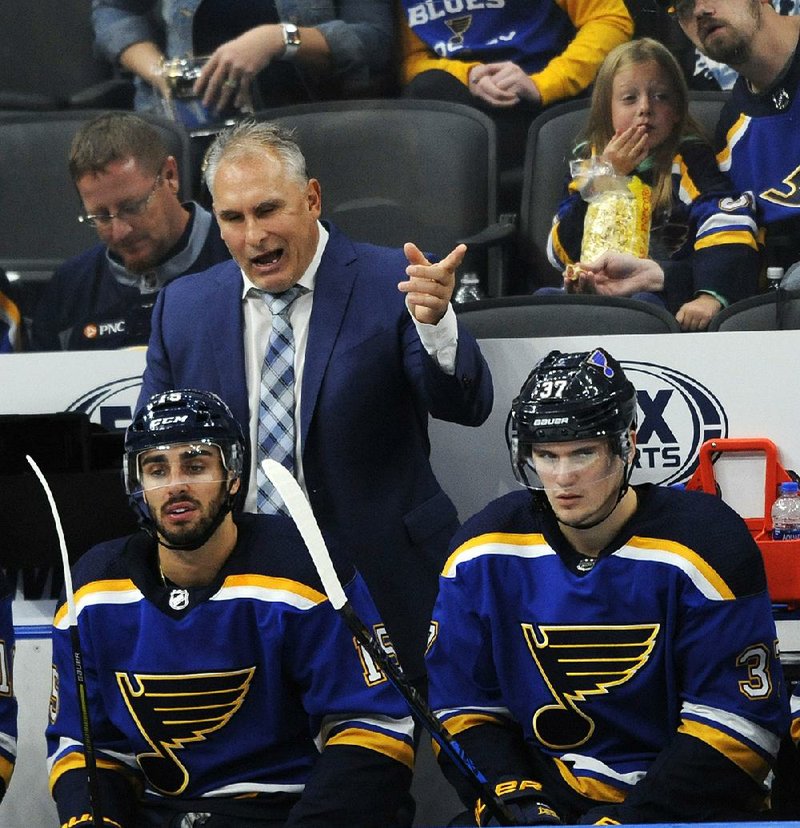 Coach Craig Berube (back) and the St. Louis Blues had their ups and downs during the regular season last year, but they got hot at the right time and won the Stanley Cup in the process.

When the Tampa Bay Lightning woke up on Jan. 3 atop the NHL standings, the St. Louis Blues were dead last.

Tampa had won 31 of its first 39 games, while St. Louis had won just 15 of its first 37. The Lightning staked themselves to a 30-point lead on the Blues before the season's halfway mark.

The rest is league history: The Lightning got swept out of the playoffs in the first round, and the Blues went from the basement to lifting the Stanley Cup in triumph. That the Blues struggled for so long and didn't hit their stride until January could make much of the marathon regular season seem pointless, though players suggest it actually shows the importance of ups, downs and adversity during the 82-game grind as a way to prepare to win playoff games.

"You've got to understand in the bigger picture, if you're going to have a four-, five-, six-game losing streak at some point, it's no reason to hit the panic button," said Jonathan Toews, who won the Cup as Chicago Blackhawks captain in 2010, 2013 and 2015. "You almost have to go through that so when playoffs do come around, you're ready to turn that switch and you've got that energy and you've got that confidence that if you work, you're going to get the results for it."

Players who watched all four division champions bow out in the first round and the Blues grind to the first title in franchise history came away with some important lessons on how to approach the regular season. St. Louis showed a midseason coaching change can work, a goalie can come out of nowhere and have success, and momentum can snowball in a positive direction.

"It was good at understanding that it's a roller coaster, and the more you can stay even keel and keep staying with things and keep pushing each other to think that sometimes things will change, you'll get a bounce and things will start to go your way," Blues playoff MVP Ryan O'Reilly said. "It was very awful at the start. We couldn't seem to string wins together. But guys kept working. Guys didn't shut down. They kept working for each other and the next thing you know, things started to change. Once that belief happened, it kind of steamrolled."

Standings and seeding seems to matter little in the playoffs, where matchups take precedence. It also apparently doesn't matter where a team is at by Thanksgiving or New Year's Day, which used to be important markers about who will make the postseason.

"We started well and we ended bad," said Jack Eichel, whose Buffalo Sabres went on a 10-game winning streak, were first in the league at Thanksgiving and missed the playoffs. "You look at St. Louis and they did the complete opposite. It's a long season, and a lot goes into it. Consistency is one of the most important things in this league."

Is it, though? The Blues didn't put together a winning streak longer than two until mid-January. They got a boost from rookie goalie Jordan Binnington, tied a franchise record with 11 consecutive victories and became the poster boys for coming together at the right time.

"It's just something to rally behind," Dallas Stars goaltender Ben Bishop said. "Usually that's kind of what it comes down to. Something happens, and usually a team rallies behind it."

Rallying points are impossible to predict, and there's no way to control when and how a group comes together. Still, general managers, coaches and players are always searching for that recipe of how to peak at the right time.

"You want to keep climbing," said goaltender Tuukka Rask, whose Boston Bruins pushed St. Louis to Game 7 of the Cup Final. "I don't think you want to peak early and then slowly decline from there. That's what everybody's looking for. But you're just trying to make the playoffs, always. You're just trying to make the playoffs on a good note and not feeling like, 'Oh, we dodged a bullet here. We barely made it.' And then you're kind of starting the playoffs not knowing what your game's going to look like. You want to be feeling great as a team entering the playoffs."