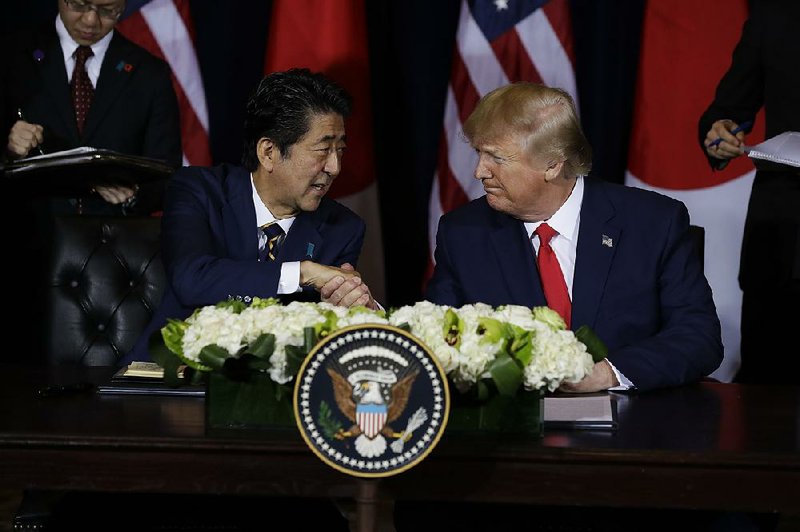 President Donald Trump and his Japanese counterpart Shinzo Abe touted a limited trade agreement Wednesday, as the U.S. withdrew the threat of imposing auto tariffs on the Asian nation for now.

Trump and Abe signed the "first stage" of an initial trade pact after meeting Wednesday at the United Nations General Assembly in New York. In an emailed statement, the U.S. trade representative's office described the agreement as covering "early achievements."

Trump told reporters that he expects "in the fairly near future" that the U.S. will have "final comprehensive deals signed with Japan."

A sticking point in the more than yearlong talks was Abe's need for a guarantee that Trump will not impose national-security tariffs on imported Japanese automobiles and auto parts.

[Video not showing up above? Click here to watch » https://www.youtube.com/watch?v=yzQZIDY7NJ8]

While the issue of auto tariffs isn't committed to paper in the first phase of the deal, Trump doesn't intend to levy the duties on Japan for the time being, U.S. Trade Representative Robert Lighthizer told reporters. Still, Japan secured only a vague written assurance from the Trump administration not to impose auto tariffs for the time being.

Trump was eager to make a deal with Japan to aid U.S. farmers who have been largely shut out of the Chinese market as a result of his trade war with Beijing. American agricultural producers, also reeling from bad weather and low commodity prices, are a core component of Trump's political base as he faces re-election next year.

"These are really big dollars for our farmers and for our ranchers," Trump said.

Trump, seated next to Abe, told reporters the trade deal will help U.S. farmers by opening up Japan's agricultural market. It will eliminate or reduce tariffs on $7.2 billion of U.S. food and agricultural products, including corn, pork, almonds, blueberries, sweet corn, sorghum, ethanol, cheese and whey, frozen poultry and oranges, the trade representative's office said in a statement.

Missing from the list of farm products is rice. The proposed deal won't lower the barriers protecting Japan's rice farmers -- something Abe could use to help smooth the deal's course through parliament, where it must be ratified.

Japan is a key export market for U.S. rice farmers, who have been under pressure after the Asian nation signed trade agreements with other countries including the revised 11-member Trans-Pacific Partnership.

Japan is required to import 682,000 tons of rice under World Trade Organization commitments, with the U.S. typically making up about half of that amount, according to USA Rice. Since Japan signed the Comprehensive and Progressive Agreement for Trans-Pacific Partnership, there's been more competition from Australian producers, the industry group said.

"This is a win-win agreement that will benefit consumers in both countries," Abe said.

Abe's top priority was to win a pledge that the U.S. won't impose tariffs on Japanese automobile exports, a cornerstone of the country's economy. Removing the threat would relieve uncertainty after months of slowing trade and just ahead of a 10% sales tax increase Tuesday that poses a fresh risk to the Japanese economy.

The two sides had agreed that no such tariffs would be imposed during the first rounds of talks. On Wednesday, both the U.S. and Japan issued statements indicating, however, that the Trump administration's tariffs on auto imports could still be applied at a later stage.

"If there is no breach of the agreement, that means it is being faithfully implemented. And while that is the case, Section 232 will not be imposed," Foreign Minister Toshimitsu Motegi said in New York, referring to the U.S. trade provision that gives the president discretion to impose tariffs on national-security grounds. "Prime Minister Abe confirmed this directly with President Trump."

U.S. Sen. Ron Wyden, the ranking Democrat on the Finance Committee, criticized the narrow scope of the deal. "The agriculture deal is not a comprehensive one and there is much more to do to level the playing field in Japan for American workers, businesses, farmers and ranchers."

Sen. Charles Grassley, the committee chairman, said Wednesday that he's happy with the deal, but added, "I think the negotiations ought to be more comprehensive than just for agriculture."

Information for this article was contributed by Mario Parker, Jenny Leonard, Shawn Donnan and Laura Davison of Bloomberg News.