Bears soaking up off weekend 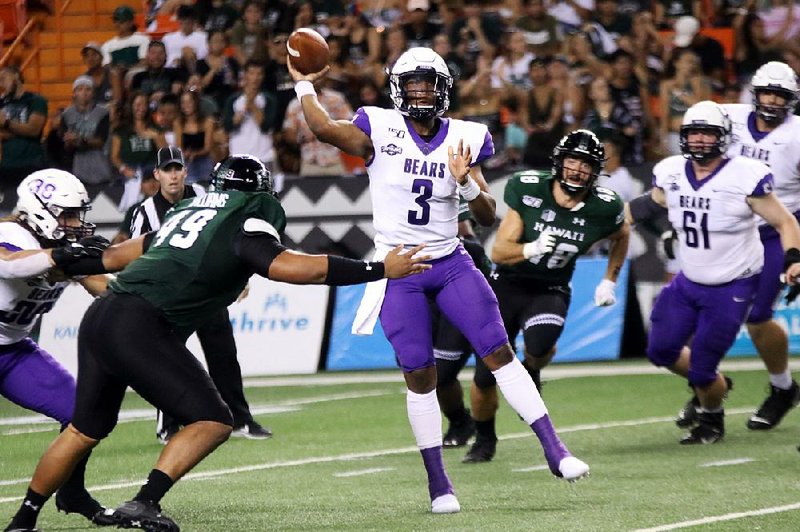 Central Arkansas sophomore quarterback Breylin Smith said the Bears can use off time after traveling to play Hawaii last week. “It takes you a while to get back on track, so this is really good timing for a break,” he said.

CONWAY -- The University of Central Arkansas Bears followed up their trip to Hawaii with a break that came at a perfect time.

After nine weeks of nearly nonstop football, concluded by 25 hours of travel and a game against the Hawaii Rainbow Warriors that began last Saturday at 11 p.m. Conway time, UCA's bye-week break was in order.

"The whole travel deal, 12 to 13 hours on a plane, that's no fun," sophomore quarterback Breylin Smith said. "It takes you a while to get back on track, so this is really good timing for a break."

UCA Coach Nathan Brown gave his first- and second-team players a day off Friday and again today ,but directed them to the weight room.

"This week, we used three days for developmental practices," Brown said. "We wanted to give some guys who don't get quite as much attention during prep weeks, our redshirt freshmen, some third-team guys, we could spend some focused energy on those guys, while the first two units were in the weight room."

Hawaii was UCA's second opponent of four this season against an NCAA FBS member. UCA won 35-28 against Western Kentucky on Aug. 29 in the season-opener for both teams. Against Hawaii, UCA fell behind 28-0 in the first half, but battled back to within 28-16 in the fourth quarter. Hawaii scored late for a 35-16 victory, but Smith said the result served as a confidence booster.

"It was one of those kind of games that are really encouraging," Smith said. "We didn't come out of it kicking ourselves. For the most part, we played well. We just missed a few opportunities."

With no game today, UCA has put in extra preparation for its return road trip to play Nicholls State at Thibodaux, La., on Oct. 5. The Colonels were picked by coaches as the favorite to win the Southland Conference this season.

Nicholls State is led by senior quarterback Chase Fourcade, the returning conference player of the year.

"He's a really, really good football player," Brown said. "Defensively, they're really solid. They've got a lot of solid players on defense. They've just played good football down there over the last two years. We know it's going to be a really tough challenge."

Smith said today gives players and coaches a rare in-season chance to kick back and do what most football fans do on fall weekends.

"When you get your bye week, you just kind of get to sit around and watch football all day," Smith said. "When you're playing, you have to do walk-throughs, mandatory meals, so you don't really get to just sit back. I'm really looking forward to it."

"You want a team full of guys who want to watch football and who are football fans," Brown said. "The more guys you have that do that, usually you're going to have a better football team."

Through its first three games, UCA had rushed for a total of 110 yards with senior running back Carlos Blackman leading the way with 97 yards on 41 carries.

Behind an offensive line Brown said has improved with each game, Blackman helped eliminate the Bears' running struggles with 17 carries for 147 yards and 1 touchdown in the loss at Hawaii.

"We shuffled some guys around on the line to try to get the right personnel up there," Brown said.

Brown said he was pleased by the effort of freshmen Josh George and Parker Ray, and sophomore Jaylen Hendrix along the line.

"Jaylen played his best game for far," Brown said. "We put in a lot of sweat equity during the week, and Carlos ran very hard. He broke some tackles and made some plays."

Smith said UCA's running game against Hawaii benefited from the first three games of exposure for sophomore receiver Lujuan Winningham and freshman receiver Tyler Hudson, who have combined for 45 catches, 794 yards and 8 touchdowns this season.

"I think teams we play are starting to understand that we have two guys standing outside who can score any time," Smith said. "They have to respect those guys."