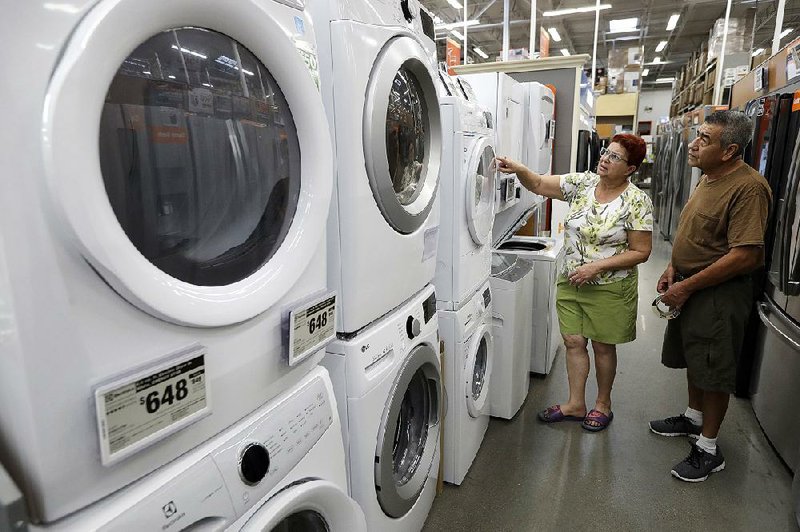 The Commerce Department says U.S. consumer spending rose 0.1% in August, the smallest gain in six months, while there was a 0.2% increase in orders for long-lasting manufactured goods, such as the clothes washers and dryers like these at a Home Depot store in Boston.

Consumer spending on goods and services, which accounts for about two-thirds of gross domestic product, increased 0.1% from July, the smallest gain in six months, Commerce Department data showed Friday. The Federal Reserve's preferred underlying price gauge rose 0.1% from July, missing the median 0.2% estimate, while the gain in incomes matched projections.

Personal income increased 0.4%, up from a small gain in the previous month, the Commerce Department said.

Consumers are a key driver of the economy as businesses have cut their investment spending and exports have slipped. August's modest gain suggests the economy may slow in the July-September quarter compared with the beginning of the year.

Consumer confidence is at historically high levels, but the Conference Board said this week that it slipped this month, in a sign that the U.S.-China trade war is raising economic uncertainties.

The small increase in consumer spending was below most economists' forecasts, and spending in July was revised slightly lower. In addition, a separate Commerce Department report showed that orders for long-lasting manufactured goods, such as autos and appliances, rose just 0.2% in August.

Orders for nonmilitary capital goods excluding aircraft -- a proxy for business investment -- fell 0.2%, the weakest performance in four months, compared with forecasts for no change.

Demand for machinery edged up 0.6 percent while orders for computers and related products rose a slight 0.1%.

Most economists say the reluctance to invest stems from the uncertainty surrounding the trade war. President Donald Trump has threatened to impose tariffs on about $160 billion of consumer goods imports from China Dec. 15, though talks about the dispute are scheduled for next month.

The data on consumer spending and business investment led many economists to slash their estimates for growth in the July-September quarter. Oxford Economics cut its forecast from an annual rate of 1.8% growth to 1.3%. Economists at Morgan Stanley lowered its forecast to 1.5% from 2.1%.

"The consumer is still in solid shape and the quarter's still going to be good, but we were shaping up initially for a spectacular quarter, and I think we probably need to temper expectations a little bit," said Stephen Stanley, chief economist at Amherst Pierpont Securities.

With income rising faster than spending in August, the savings rate rose to 8.1%, a sign that consumers have a healthy financial cushion and aren't overspending even as the economy is in its 11th year of expansion. The savings rate fell to 3.2% in 2005, before the recession.

The Fed's preferred inflation gauge climbed 1.4% in August compared with a year earlier, below its 2% target. The Fed aims to have some inflation as a way of avoiding deflation, a destabilizing fall in prices and wages. Yet inflation has mostly been below that level since the target was adopted in 2012.

Excluding food and energy, core prices rose 1.8% in August from a year earlier, the third-straight increase. That is closer to the Fed's target and could provide some ammunition to Fed officials who are reluctant to cut interest rates further.

Last week, Fed officials cut the benchmark interest rate by a quarter of a percentage point for the second time this year to protect the economy from global weakness and trade uncertainty. Central bankers' quarterly forecasts signaled only a minority of officials saw the need to lower borrowing costs further this year.

"Business investment has kind of fallen off of a cliff," Randal Quarles, a Fed governor, said in remarks Friday in Washington. "That's a concern, but not one which affects the fundamental soundness of the current position of the economy."

Still, the trend in nonmilitary capital-goods orders underscores how the U.S.-China trade war and slowing growth abroad are weighing on American companies. Policy uncertainty has muddled supply chains and contributed to delayed long-term investments in people and capital. The question is how much the weakness will filter through to the broader economy.

Information for this article was contributed by Christopher Rugaber and Martin Crutsinger of The Associated Press; and by Reade Pickert of Bloomberg News.