Former Aggies all around Hogs 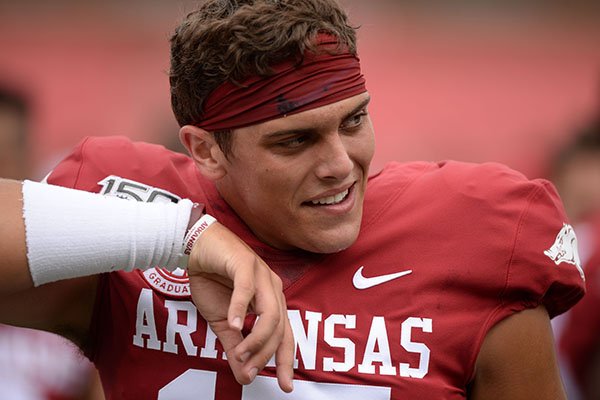 Arkansas quarterback Nick Starkel smiles Saturday, Aug. 24, 2019, after coming off the field following the first series during practice in Razorback Stadium in Fayetteville.

Arkansas Coach Chad Morris graduated from Texas A&M in 1992 with a mathematics degree.

Nick Starkel, the Razorbacks' starting quarterback, graduated from Texas A&M last spring with a business degree, then transferred to Arkansas with two seasons of eligibility remaining.

"I'll always wish Nick the best of luck," Aggies quarterback Kellen Mond said. "We were in the same locker room for two years, and he's always been a great person to me."

Starkel and Mond competed for Texas A&M's starting job, and now they'll be competing for opposing teams when the Razorbacks play the Aggies at AT&T Stadium at 11 a.m.

As a redshirt freshman in 2017, Starkel was Texas A&M's starter when he suffered a broken ankle in the opener against UCLA.

Mond started the next eight games, then Starkel started the final four, including the Belk Bowl against Wake Forest when he passed for 499 yards and four touchdowns.

Jimbo Fisher, who became the Aggies' coach in 2018 after Kevin Sumlin was fired, picked Mond over Starkel to be the starter last season. After Mond held onto the job, Starkel transferred.

Fisher said he's not surprised Starkel -- who played four games off the bench last season -- has become a starter for the Razorbacks.

"Nick's a very talented guy that can play at a lot of places in this country," Fisher said. "He could have started here. It's just the situation.

"It was a tough battle and only one can play, and he elected to [transfer]. He is a class, class individual."

"He was my brother when he was here, and that continues," linebacker Anthony Hines said. "But on the field, it's just business."

"Nick's a great guy," Carper said. "While he was here, he was a good friend, a good teammate. But we're trying to prepare like it's another SEC opponent."

"I wasn't good enough tonight, but it doesn't mean my teammates don't believe in me," Starkel said after the game. "If I've got the ball in my hand, I'm going to keep fighting.

Starkel said he would approach today's game like any other on the schedule.

"I've got to refocus," he said. "I lacked focus this week [for San Jose State], I think, and it won't happen again."

Fisher said he expects Starkel, who accepted blame for the loss in his postgame comments and on social media, to bounce back today.

Texas A&M's players on defense who were Starkel's teammates might have added insight into his strengths and weakness, but he figures to have the same familiarity with them.

"That's hard to say," Carper said of who might have the advantage today. "Being on the same team for the past three years and having some familiarity maybe can help either way."

Morris and Starkel are two of several Arkansas coaches or players with ties to Texas A&M.

Chavis coaches linebackers along with calling the defense, so he was Hines' position coach. Bradley Dale Peveto, an Arkansas assistant from 1994-96, is now Texas A&M's linebackers coach.

"It's the nature of this business, people come and go," Hines said. "I've just really been thankful to be paired with Coach Peveto and Coach Jimbo and the new staff.

"But I also have a lot of respect for Coach Chavis, and I look forward to playing his team."

Chavis, who will face another former team where he was defensive coordinator when Arkansas plays LSU, said he doesn't have extra emotions playing Texas A&M.

"Really, it's the next game," Chavis said. 'Certainly my time over there I was treated very well. As well as I could be treated."

Arkansas junior running back Rakeem Boyd, who has a team-high 73 carries for 394 yards and 3 touchdowns, also is a former Aggie. He was with Texas A&M as a true freshman in 2016, but he didn't play.

"It's going to be fun going against Rakeem," Carper said. "He's a good back and runs the ball hard. He's not going to go down easy. That's somebody we have to focus on."

Fisher said it's not odd to face a player he previously coached, especially with the transfer portal making it easier to switch schools.

"It's just part of today's world," Fisher said. "You've got to get used to it. Old coaches, old players."