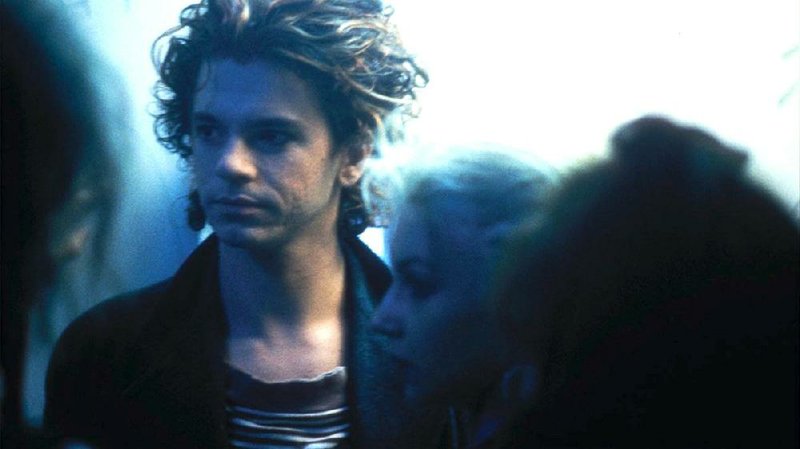 When Australian singer Michael Hutchence killed himself in 1997 at the age of 37, he was proof that someone could be famous and unknown. Thanks to the sloppiness and salaciousness of the British tabloids, he's remembered as having died from autoerotic asphyxiation, which according to the evidence (frantic phone calls before the incident and the way Hutchence hanged himself) was impossible.

As director Richard Lowenstein recounts his life in the new documentary Mystify: Michael Hutchence, the INXS lead singer and lyricist emerges as a far more engrossing figure. Lowenstein, unlike many of the people who have written about or discussed Hutchence and his career, knew him well.

He directed and produced most of the band's videos and has assembled a formidable collection of performance clips, outtakes, interviews and even footage Hutchence shot himself. The movie is now out on Blu-Ray and played at last year's Hot Springs Documentary Film Festival.

For those who didn't grow up with INXS' omnipresent 1987 album Kick, the band, which consisted of three brothers (guitarist Tim Farriss, keyboardist Andrew Farriss and drummer Jon Farriss), bassist Garry Beers, saxophonist Kirk Pengilly and Hutchence combined catchy hooks with the singer's magnetic rock 'n' roll persona. That album alone included the hits "Need You Tonight," "What You Need," "The Devil Inside" and "Mystify."

When you catch the videos Lowenstein shot or produced on Vevo or YouTube, they're remarkably simple for '80s fare. Curiously, their clips are still watchable even if they don't have the gargantuan production value of Michael Jackson's expensive spectacles.

"When you turned the camera on the band or Michael and the music, it gelled in a way that other bands didn't," Lowenstein says by Skype from his home in Melbourne. "I worked with U2 ("Desire," "Angel of Harlem"), and we did some good videos, but it wasn't quite the same as Michael.

"He did have the presence of an actor. When you pointed the camera at him, and then the music and the effects seemed to gel together into something quite special..

"With Michael, you'd get a sort of personal connection. He wasn't just looking at the camera; he was looking at you, the close friend. There was this sort of twinkle in his eye that said Richard is on the other side of the camera, so he knew he was in safe hands."

John Sayles (Lone Star), who directed memorable Bruce Springsteen's "I'm on Fire" video, put it in his book Thinking in Pictures, "Be a rock star, look at how many models dressed in underwear you'll meet."

But in Lowenstein's "Never Tear Us Apart" from Kick, Hutchence and the band wander through Prague, but though the singer walks within inches of a raven-haired mystery woman they never meet.

In return, Lowenstein helped Hutchence learn how to shoot his own footage.

"He was fascinated [with] the filmmaking process," Lowenstein says. "When we started working with him, we were working with this hand-wound camera called a Bolex. Instead of a crew with the dollies and the tracks, there's Richard and his team with his little handheld cameras. Almost immediately when he got the money, he said, 'I want one of those cameras, which were 16 millimeter. By that time, he was dating (fellow Australian vocalist) Kylie (Minogue), which was 1989, and he was filming his first date, which was insane. And it was also insane that we actually found the footage."

"We found some footage from some of his girlfriends that he had shot. We had to check to make sure there wasn't any sex on the tapes... . in a couple of cases, he had."

In the archival clips included in Mystify: Michael Hutchence, the singer emerges as someone who loved the spotlight but also who longed to be taken seriously.

"In his dreams, he would have had the popularity of U2 with the credibility of Nick Cave," Lowenstein says. To his credit, Hutchence could throw out a bon mot that Cave might approve. In "Never Tear Us Apart," he wails, "If I hurt you, I'll make wine from your tears."

At the same time, the film features a clip where Hutchence sheepishly admits that while the song was a hit and has been a staple at weddings ever since it didn't make the woman whom he intended it for want to stay with him.

"There's a lot of other rock stars of the time and later, who like Oasis and Duran Duran, just completely loved being stars, being treated like stars and having maids and servants and plush hotels. Michael did like a big hotel room, but that's pretty much where it stopped," Lowenstein says.

If Hutchence's life was more complicated than the rock star cliché, so was his death. In 1992, a Danish cab driver assaulted the singer, knocking him to the ground, which led to a skull fracture. For the rest of his life, he was unable to smell or taste, and the injury led to depression and bouts of hostility.

In the years that followed, his erratic behavior was simply attributed to his profession and not more serious problems.

"The reason that was sort of sporadically known was because of Michael himself. He never let the truth get in the way of story. Although to his very close friends, who he trusted, he did tell the real story. We found instances of him telling all sorts of different variations, sometimes a motorbike, sometimes a cycle. I saw his behavior change kind of change quite dramatically, and I knew something wasn't right," the director says.

"It wasn't until I found the only eyewitness to the event, which was (Danish model and photographer) Helena Christensen. She's been quiet about it for the following 20 and so years, and we finally agreed to get her to talk on the record."

Mystify: Michael Hutchence is loaded with interviews from the singer's friends like Bono and his collaborators like the Farriss brothers. None appears on camera. As they recall events, their voices guide the existing footage as if they're still living in it.

"I'm a huge fan of the work of D.A. Pennebaker (Don't Look Back, the Arkansas-shot The War Room). He doesn't do talking heads, as against other documentary filmmakers who do that. My documentaries I made before are sort of similar to that," he says.

"I don't want to make a film where (the audience) are looking now at people 20 years later. I wanted the film to be images of and around Michael as if he was telling the story ... This story was about going back in time, and voices don't age. If you're looking at footage of Michael in 1986, it looks as if the person is there at the time."