Mitchell somebody to have on 'your side' 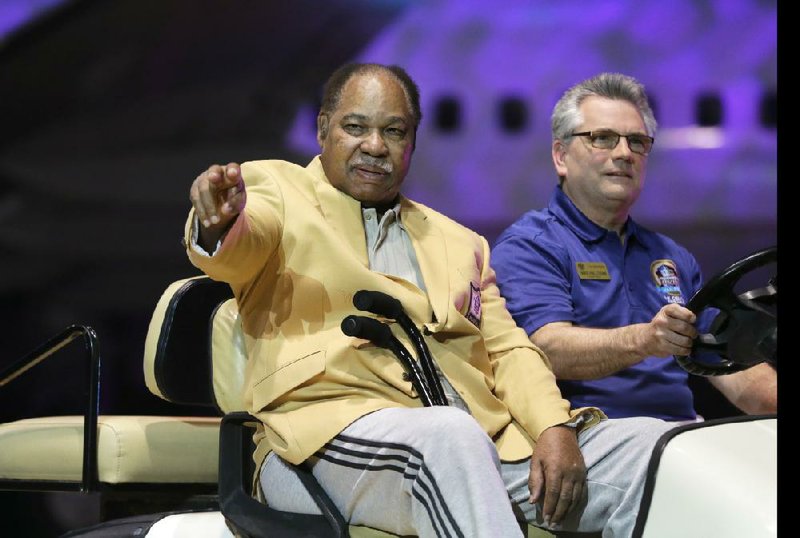 FILE - In this May 2, 2014, file photo, Bobby Mitchell is introduced before the inaugural Pro Football Hall of Fame Fan Fest at the International Exposition Center in Cleveland. Mitchell, the speedy late 1950s and 60s NFL offensive star for the Cleveland Browns and Washington Redskins, has died. He was 84. The Pro Football Hall of Fame said Sunday night, April 5, 2020, that Mitchell's family said he died in the afternoon. (AP Photo/Mark Duncan, File)

Growing up in Hot Springs, there was no doubt Charles Butler wanted to play with Bobby Mitchell.

"You knew early on when you chose your teams," said Butler, a childhood friend of Mitchell and teammate at Langston High School and the University of Illinois, "you wanted him on your side or you wanted to be on his team."

Mitchell, a Hot Springs native who earned induction into the Pro Football Hall of Fame, died Sunday at 84 at his home in Washington, D.C.

No cause of death has been announced.

Born June 6, 1935, in Hot Springs, Mitchell was one of eight children of Albert and Avis Mitchell.

He played at the segregated Langston High School and Illinois before spending 11 seasons in the NFL. He was drafted by Cleveland in the seventh round of the 1958 draft and spent four seasons with the Browns before being traded to the Washington Redskins.

When the Redskins acquired Mitchell, he became the first black man to play for the franchise, which was the last to integrate in the NFL.

Butler first met Mitchell when he was in the third grade and Mitchell was in the second grade. He said he enjoyed his friendship with Mitchell.

"He was a very friendly person," Butler said. "He was very outgoing."

"He was a tremendous ballplayer," Duren said. "In my opinion, I think he's the greatest football player to ever come out of Arkansas."

Seeing Mitchell play on the professional level was fun for Butler.

"It was like the song, 'U Can't Touch This' [by rapper MC Hammer]," Butler said. "He was so hard to get a hold of. He was so shifty. He had that kind of speed.

Mitchell starred in multiple sports at Langston, which won the 1953 Negro State Football Championship. Mitchell was an All-State Negro Football selection his junior and senior seasons.

While in Hot Springs, Mitchell met other black athletes -- such as baseball stars Jackie Robinson and Roy Campanella, and boxer Joe Louis -- who came through the city in the 1940s and 1950s to visit the casinos, bathhouses and hotels. In fact, Campanella bought Mitchell's suit for his graduation ceremony at Langston in 1954.

Butler said Mitchell wanted to be a professional athlete, in part because of those visits.

"We were always told, if you had any aspirations at all, you can be like them," Butler said of having careers like Robinson, Campanella and Louis. "The teachers, almost to a fault, they said even though we were segregated, if you took the lessons seriously, you could make a good life for you and your family."

After high school, Mitchell played football at Illinois from 1954-57, earning All-Big Ten honors. He was also on the track and field team for the Fighting Illini, establishing an indoor world record in the 70-yard low hurdles in 1958 with a time of 7.7 seconds, but the record lasted only six days. He later won the Big Ten championship in the 100-yard dash (9.6) and the 200-yard dash in (21.3).

Mitchell played halfback for the Browns from 1958-61, and was a flanker for Washington from 1962-68. Mitchell was a three-time All-NFL selection and played in four Pro Bowls.

When Mitchell joined the Redskins in 1962, they became the last NFL team to integrate. Redskins Owner George Preston Marshall attended segregated schools, but he was under pressure from President John F. Kennedy's administration to integrate the Redskins.

The Redskins acquired Mitchell in 1962 from the Browns, who received the signing rights to Syracuse running back Ernie Davis in the deal. Davis never played in the NFL after being diagnosed with leukemia in the summer of 1962. He died in May 1963.

Mitchell's career in Washington paved the way for future Redskins players such as Hall of Fame cornerback Darrell Green, who paid tribute to Mitchell on Twitter on Monday.

"Bobby Mitchell was an awesome person and a mentor to a lot of young knuckleheads like myself back in the day," Green tweeted. "His mentorship helped to put us on the right path from the first moment we entered the building. He will be fondly remembered and sorely missed by us all!"

"We think the world of Bobby Mitchell," Duren said. "I've talked with some of my buddies. We all think he was the greatest football player we've seen. Maybe one of the best athletes, period."

Print Headline: Mitchell somebody to have on 'your side'