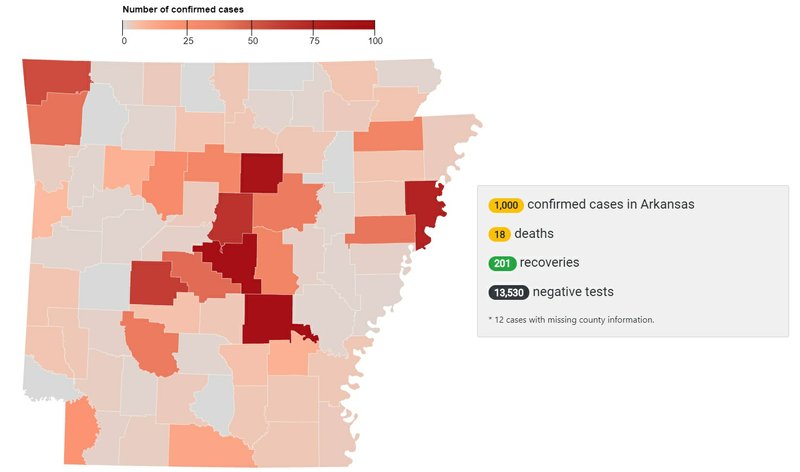 Positive coronavirus cases in Arkansas have reached 1,077, according to figures released Wednesday evening by the state Department of Health.

State officials expect unemployment insurance claims to reach 150,000 by the end of the week, but gig economy workers and freelancers affected by the coronavirus outbreak will need to wait at least three weeks before the state will be able to accept their applications.

The state must create a new system to process these claims, Preston said, and that is expected to take at least three weeks.

He said backpay of benefits will be available once the system is running and asked workers who fall into the category not to apply until the new system is created.

Preston said staff have also been added to process typical unemployment claims in a bid to cut down on the wait times to apply and receive benefits.

At the same news conference, Health Secretary Nate Smith said there are 1,023 cases of covid-19 in Arkansas. Deaths remained at 18, while recoveries increased to 208.

Smith said 76 patients are hospitalized, including 30 on ventilators.

No new cases have been reported at the federal prison in Forrest City, where 18 inmates and 4 workers were positive as of Tuesday, but Smith said additional individuals are symptomatic and are being tested.

Centers for Disease Control and Prevention personnel are at the facility to work on containment.

For the first time, Smith released racial data on those who have died of covid-19 in Arkansas.

Four of those who died were adults between the ages of 19 and 64 while the rest were adults 65 and older, Smith said.

Hutchinson was again asked about whether the state’s directive to temporarily stop some medical procedures includes stopping abortions.

Hutchinson answered by saying Arkansas' temporary restrictions on abortion facilities are similar to those adopted in Texas.

The Texas law bans "nonessential" medical procedures due to the covid-19 emergency. That umbrella includes abortions that aren't necessary to protect the mother's life or health, officials there have said.

That restriction was upheld this week by a U.S. Court of Appeals panel. Abortion providers want the U.S. Supreme Court to overturn the ruling, arguing it is an unconstitutional infringement of abortion rights.

On March 30, the Arkansas Department of Health sent a "guidance letter" to the state's health facilities, including abortion clinics, addressing "elective" procedures.

"Procedures, testing, and office visits that can be safely postponed shall be rescheduled to an appropriate future date," the department states on its website.

During Wednesday's news conference, Hutchinson expressed concern that people are coming from out of state to obtain abortion services in Central Arkansas, raising the risk of coronavirus infection. The matter is under review, he told reporters.

The number of positive coronavirus cases reported in Arkansas hit 1,000 Wednesday morning, according to data from the state Health Department.

The number of deaths remained at 18, while 201 people have recovered, the agency reports.

Arkansas’ first presumptive case of covid-19 was detected in a Pine Bluff patient March 11. The first two deaths from the illness were reported March 24.

Andy Davis contributed to this story.