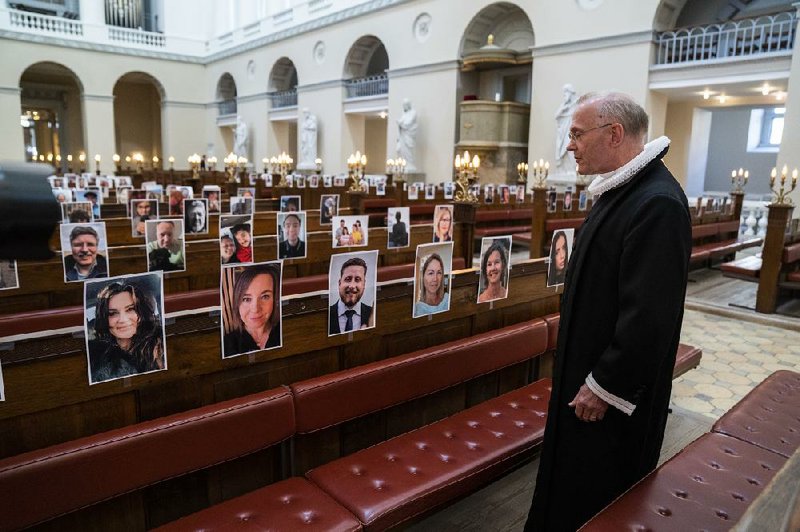 Anders Gadegaard, dean at Vor Frue Kirke ( Church of Our Lady) in Copenhagen, looks over the selfies his congregation sent in for a Good Thursday livestreaming worship service after the benediction. As Easter approaches, many religious denominations are holding virtual services, while others are planning rituals at drive-in theaters so people can worship in their cars. (AP/Ritzau/Martin Sylvest)

NEW YORK -- Governments warned Thursday that the hard-won gains against the coronavirus must not be jeopardized by relaxing social distancing over Easter weekend as a spike in deaths in Britain and New York and surges of reported new infections made clear that the battle is far from over.

In South Korea, the coronavirus may be "reactivating" in people who have recovered from the illness, according to Korea's Centers for Disease Control and Prevention.

Fear of reinfection in recovered patients also is growing in China, where the virus first emerged in December, after reports that some tested positive again -- and even died from the disease -- after supposedly recovering and leaving the hospital.

"While we are putting more weight on reactivation as the possible cause, we are conducting a comprehensive study on this," Jeong said. "There have been many cases when a patient during treatment will test negative one day and positive another."

South Korea was one of the earliest countries to have a large-scale coronavirus outbreak, but the country has had just 200 deaths and a falling new-case tally since peaking at 1,189 on Feb. 29. One of the world's most expansive testing programs and a tech-driven approach to tracing infections has helped Korea contain its epidemic without lockdowns or shuttering businesses.

Worldwide, the number of dead topped 95,000 and confirmed infections were at more than 1.5 million, according to Johns Hopkins University, though the true numbers are believed much higher, in part because of different rules for counting the dead and cover-ups by some governments.

[Video not showing up above? Click here to watch » https://www.youtube.com/watch?v=7mG0CgBEw-Q]

New York state reported a record-breaking number of dead for a third-straight day, 799. More than 7,000 people have died in the state as of Thursday night, accounting for almost half the U.S. death toll of more than 16,000.

"That is so shocking and painful and breathtaking, I don't even have the words for it," New York Gov. Andrew Cuomo said.

But he added that there are hopeful signs, including slowdowns in the number of people being hospitalized, admitted to intensive care and placed on ventilators.

He said the onslaught of patients has not been as big as feared and hospitals are standing up to the strain so far. About 18,000 people were hospitalized, well short of the 90,000 hospital beds statewide, many of which were hurriedly lined up at a convention center and a Navy ship docked in the city.

Dr. Anthony Fauci, director of the National Institute of Allergy and Infectious Diseases, told NBC in an interview Thursday that U.S. fatalities from covid-19 may be as low as 60,000 -- far fewer than earlier projections -- because of safety measures such as social distancing.

"The real data are telling us it is highly likely we are having a definite positive effect by the mitigation things that we're doing, this physical separation," he said. "I believe we are going to see a downturn in that, and it looks more like the 60,000, than the 100,000 to 200,000" projected fatalities.

Dr. Deborah Birx, the top public-health official coordinating the White House's coronavirus task force, projected March 31 that as many as 240,000 Americans could die as a result of the outbreak, even with another 30 days of the most stringent public-health restrictions.

That analysis caused President Donald Trump to retreat from ambitions to urge Americans back to work by Easter.

Separately, Fauci told CBS on Thursday that he sees the U.S. making progress toward normalization in the near future, as the April 30 end of the currently mandated social-distancing period approaches.

"Hopefully, by the time we get to the summer, we will have taken many steps in that direction," he said.

But Fauci cautioned that the virus has different progression rates in different parts of the U.S. that may necessitate a range of timetables.

As Easter approaches with widespread restrictions on public gatherings, major religious denominations are holding virtual services where people can watch on TV or online. Others are arranging prayers at drive-in theaters, where people can stay in their cars.

Other churches plan to move ahead with services, and in Texas, the governor declared religious gatherings "essential services." A Houston church has installed hand-washing stations and rearranged its 1,000-person sanctuary to hold about 100 people spaced 6 feet or more apart.

Across Europe, where Easter is one of the busiest travel times, authorities set up roadblocks and otherwise discouraged family gatherings.

Pope Francis will celebrate Easter Mass in a nearly empty St. Peter's Basilica instead of the huge square outside. In England, the Archbishop of Canterbury will deliver his Easter sermon by video.

Iranian Supreme Leader Ayatollah Ali Khamenei suggested mass gatherings may be barred through the holy Muslim fasting month of Ramadan, which runs from late April through most of May.

Meanwhile, in the U.S., Attorney General William Barr said Wednesday that some of the government-imposed lockdown measures were "draconian" and suggested that they should be eased next month.

In an interview with Fox News's Laura Ingraham, Barr said the government -- and in particular state officials -- had broad authority to impose restrictions on people in cases of emergency.

But he said the federal government would be "keeping a careful eye on" the situation, and stressed that officials should be "very careful to make sure that the draconian measures that are being adopted are fully justified."

"When this period of time, at the end of April, expires, I think we have to allow people to adapt more than we have, and not just tell people to go home and hide under their bed, but allow them to use other ways -- social distancing and other means -- to protect themselves," Barr said.

The White House has advised people to limit the size of social gatherings and practice other social-distancing measures through April. Most states have imposed even more aggressive measures, ordering residents to gather only in small groups and venture outdoors for only essential trips or possibly face fines or other penalties.

Repeatedly, Ingraham pressed the country's top law enforcement official on how the steps the government has taken comport with Americans constitutional rights to gather and worship freely. Churches have been essentially shuttered in the crisis.

Barr said that governments had a right to put restrictions on churches, so long as they were treated no differently from other institutions, but added he was "very concerned" about possible encroachments on Americans' freedom of religion.

Barr said he was also concerned about the "tracking of people" that some experts have advised might be necessary to quickly identify and quarantine those infected.

When the White House's social-distancing guidance expires, Barr said, "I think we have to consider alternative ways of protecting people."

Barr said Trump had been the recipient of "snarky, gotcha questions from the White House media pool" and took particular aim at inquiries about the drug hydroxychloroquine. Trump has touted the drug as a possible treatment for covid-19.

"As soon as he said something positive about it, the media's been on a jihad to discredit the drug," Barr said.

But Barr's other comments suggest he might harbor some wariness of state governments' shuttering nonessential businesses and ordering people to stay at home.

"I am concerned that we not get into the business of declaring everything an emergency and then using these kinds of sweeping, extraordinary steps," Barr said. "But given where we were back in March, I think the president made the right decision."

Barr noted the economics of the shutdown could cost lives. For example, he said, cancer researchers were likely at home now, not doing their critical work.

"We will have a weaker health care system if we go into a deep depression," Barr said. "So just measured in lives, the cure cannot be worse than the disease."

Numbers released Thursday by the U.S. government showed that 6.6 million workers applied for unemployment benefits last week, on top of more than 10 million in the two weeks before that.

Trump tried to allay fears the economy won't quickly rebound after the crisis, as he has predicted, saying he had a "strong feeling" that "the economy is going to do very well."

In many European countries, government programs that subsidize workers' pay are keeping millions of people on payrolls, though typically with fewer hours and at lower wages.

Governments from the 19 countries that use the euro agreed Thursday on a package of measures that could provide more than $550 billion for companies, workers and health systems to cushion the economic impact of the outbreak.

The head of the International Monetary Fund warned that the global economy is headed for the worst recession since the Great Depression. The United Nations' labor organization said the equivalent of 195 million full-time jobs could be lost in the second quarter, while the aid organization Oxfam International estimated half a billion people worldwide could be pushed into poverty.

Meantime, there were encouraging signs about the outbreak in France, where the national health agency saw indications the crisis is stabilizing, though more than 12,200 lives have been lost.

New infections, hospitalizations and deaths have been leveling off in hard-hit Italy and Spain, which together have around 33,000 deaths, but the daily tolls are still shocking. Spain reported 683 more dead, raising its total to more than 15,400. Britain recorded 881 new deaths, for close to 8,000 in all.

Japan recorded more than 500 new cases for the first time, a worrisome rise since it has the world's oldest population and covid-19 can be especially serious in the elderly.

For most, the virus causes mild to moderate symptoms like fever and cough. But for some, especially older adults and the infirm, it can cause pneumonia. About 353,000 people have recovered, by Johns Hopkins' count.

Information for this article was contributed by Michelle R. Smith, Christopher Rugaber and Marina Villeneuve of The Associated Press; by Matt Zapotosky of The Washington Post; and by Kathleen Miller and Kyunghee Park of Bloomberg News. 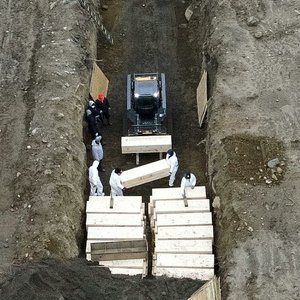 Workers bury bodies Thursday in a trench on Hart Island at a public cemetery in the Bronx borough of New York that is used mainly for dead people who aren’t claimed or whose families can’t afford funerals. Under a new policy, the city has shortened the time it will hold unclaimed bodies, and an aerial check Thursday showed about 40 caskets lined up for burial. More photos at arkansasonline.com/410outbreak/. (AP/John Minchillo)