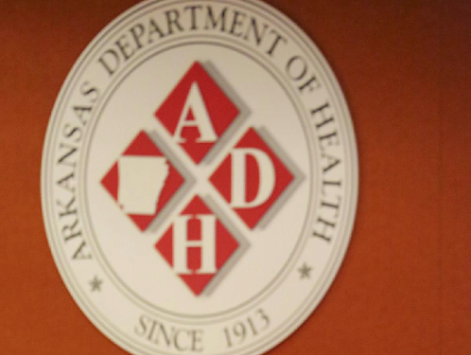 The Arkansas Department of Health logo is shown in this Jan. 28, 2019 file photo.

[SUNDAY UPDATE: The state Department of Corrections reported its first positive coronavirus diagnosis of an inmate, and the total number of deaths resulting from the virus in the state rose by two, according to officials. Read more here » arkansasonline.com/news/2020/apr/12/arkansas-inmate-tests-positive-virus-officials-say/]

The number of coronavirus cases statewide increased by 26 Saturday and the day-to-day death total increased by one to 25, but health officials remain encouraged by the lower-than-anticipated growth of the virus, according to numbers from the Arkansas Department of Health.

Cumulatively, since the first case of covid-19 was reported, there have been 1,228 positive tests throughout Arkansas, officials said.

The figures remain consistent with trends showing the state having one of the country's lowest rates of increases since the end of March.

"These numbers have stayed below our projected trend, which is very [encouraging]," said Dr. Jennifer Dillaha, medical director for immunizations and outbreak response for the Health Department.

The latest statistics also revealed that one additional county, Marion, has recorded its first positive case, Dillaha said. That reduces the number of coronavirus-free counties in Arkansas to five. More than one-quarter of the state's coronavirus cases come from two counties -- Pulaski and Jefferson, according to state statistics.

Across the country, the number of coronavirus cases continues to rise significantly. From 5:30 p.m. Friday to the same time Saturday, the number of infected Americans increased from 501,491 to 524,903, according to U.S. data.

For the first time in weeks, Gov. Asa Hutchinson did not hold a coronavirus news conference Saturday. Calls and emails to his office were not returned.

The state Health Department updated its website throughout the day.

Among the more than 1,220 Arkansans infected since the outbreak started, 346 have recovered, and the death rate has remained relatively low, officials said. As of Saturday, Arkansas' death rate was at 2%, ranking it in the bottom third among the country's 50 states. The country's covid-19 death rate, by comparison, was at 3.9%, according to the Centers for Disease Control and Prevention.

The scene throughout Little Rock has remained mostly the same since the start of the emergency. As more people stay at home, there is far less foot and vehicle traffic. Businesses are closed, so that means emptier lots and fewer cars parked on streets. Those who do venture outside often are jogging or walking dogs.

The upside to the emptier streets is that landscapers have been working under safer conditions, said Robert McLellan, an employee at Hillcrest Lawn Care. The buzzing and whirring of lawn mowers, weed trimmers and tree pruners often have been the only sounds heard on downtown streets.

McLellan pointed out that people staying at home are more prone to notice things that need to be trimmed or cut down. His business is being called out a lot more, he said.

"We blew this whole curb in about 30 minutes and we didn't see but maybe five cars the whole time," McLellan said, pointing to a stretch of East Capitol Avenue near the corner of Rock Street.

The strangeness of seeing mostly empty streets has started to wear off on McLellan and others.

"I'm getting used to it now that we've been doing this for what feels like close to 30 days," he said. "It doesn't take long to adjust."

Dillaha said there has been a positive effect from the social-distancing. Even still, there are great unknowns about the virus, from whether it's more seasonal to how much it will continue to spread once the state of emergency ends, she said.

"We're going to have to be very diligent in minimizing the spread of this virus even after the current emergency is over," Dillaha said, adding that progress on an effective and safe vaccine is expected to take a year and a half or more -- and that timeline depends on whether potential vaccines currently under development will work.

Last week, state health officials reported more than 130 covid-19 cases and five deaths among residents and workers at nursing homes in the state.

More statistics show that Arkansas' older population is the most vulnerable to covid-19. 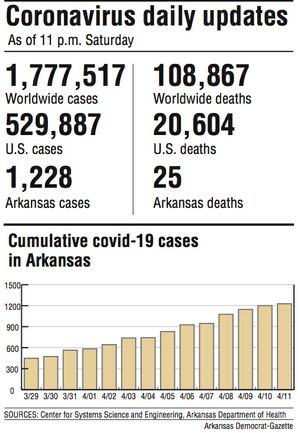