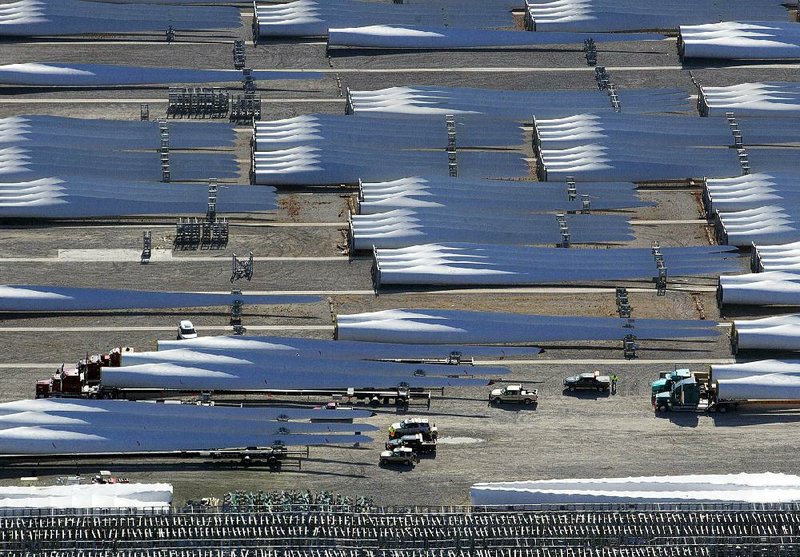 FILE — Trucks prepare to haul windmill blades last month from the LM Wind Power factory in the Port of Little Rock in this Dec. 4, 2014 file photo.

The Little Rock site for one of the world’s leading wind turbine manufacturers is shutting down, according to a spokesman.

The LM Wind Power facility, located in the Port of Little Rock industrial area, is closing its doors due to a decrease in demand for the blades made there, according to a statement issued by a spokesman for General Electric.

LM was acquired by General Electric in a $1.65 billion deal in 2016. The company remains based in Denmark.

The closure will begin immediately and continue in phases through the rest of the year, the spokesman said Tuesday. Roughly 470 employees will be affected by the decision.

“We understand that this is a difficult time to announce this decision and are taking a number of steps to provide additional support for our employees during this time, including continued pay for a minimum of four months,” the statement reads.

Employees’ health insurance premiums will also be paid for an additional six months, ensuring they have coverage through at least the end of the year. According to the spokesman, the company will provide career services to those who will be without jobs, such as support for resume writing.

The decision to close the site wasn’t a result of the coronavirus pandemic, the company said. Rather, the industry is moving toward wind turbine blades larger than the 44- and 62-meter blades made at the Little Rock facility in order to bring down the cost of renewable energy, according to the spokesman.