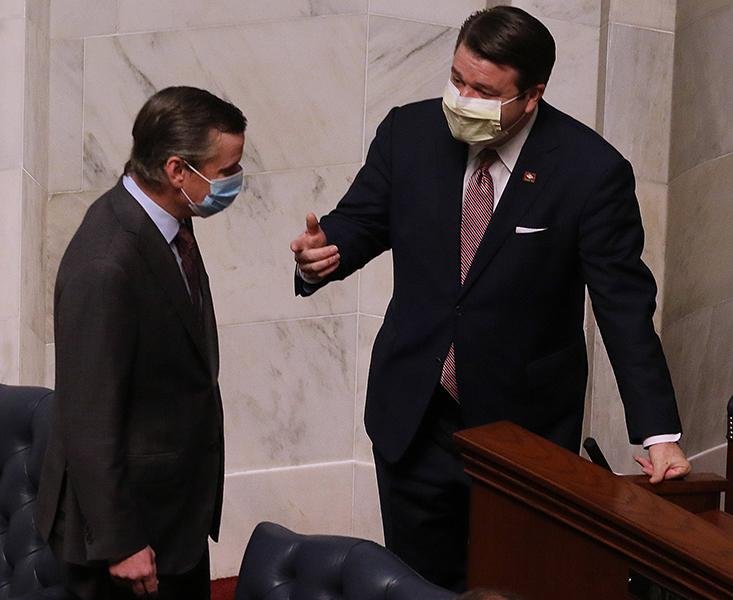 The Arkansas House and Senate on Wednesday approved identical versions of the state's proposed $5.89 billion general revenue budget for the coming fiscal year.

The state's latest revenue forecast would provide $5.68 billion for that budget in fiscal 2021, which starts July 1, and leave $212.2 million of the budget unfunded.

Two weeks ago, the state Department of Finance and Administration cut the fiscal 2021 forecast for net general revenue available to state agencies by $205.9 million, citing an expected recession from the coronavirus pandemic.

Identical versions of the bill that sets spending priorities -- the Revenue Stabilization Act -- Senate Bill 83 and House Bill 1096 -- zipped through the Joint Budget Committee on Wednesday morning with no debate.

"I think it is going to be a tight year," a Joint Budget Committee co-chairman, Rep. Lane Jean, R-Magnolia, said in an interview. "We hope for the best. We are in uncharted territory."

At his daily covid-19 news conference, Gov. Asa Hutchinson said, "We've all had to compromise a little bit" on the proposed Revenue Stabilization Act.

"But the Legislature has been a great team partner in this, both addressing the emergency, but also making sure we get through the fiscal session in a timely fashion, everybody get home with the health risks that are out there," the Republican governor said. Legislative leaders hope to wrap up the fiscal session today.

Hutchinson said the finance department "did a good job in projecting that revenue the best that they can" in its latest forecast.

"I'm an optimist. I hope we can beat that. I want to get back to business and drive our economy forward," he said. "We are still ready to go. We're pushing at the harness to get going again and hopefully that will be soon. Then, we'll have a better idea on the economic impact."

Flowers said in a text message that she voted "present" on HB1096 partly because "in light of significant across-the-board cuts and major economic uncertainty related to the Coronavirus pandemic, I couldn't support these priorities that don't reflect postponement of the tax cuts for the wealthiest tier of taxpayers in the state, per [House Democratic leader Fred Love's] measure that failed in the Senate."

On March 23, the finance department cut the net general revenue budget for fiscal 2020 by $353.1 million, to $5.38 billion. In a special session from March 26-28, the Legislature authorized Hutchinson to create a $173 million covid-19 rainy-day fund to fill budget holes and cover unanticipated needs resulting from the pandemic.

Hutchinson attributed the fiscal 2020 budget cut to the economic impact of the pandemic -- a projected drop in tax collections in the fiscal year's final three months and shifting the state's April 15 deadline for individual income tax filings and payments until July 15 to coincide with the federal government's extension of those deadlines.

Priorities for general revenue funding of programs are set in the Revenue Stabilization Act, which is passed every year and keeps the state from deficit spending. The state's two largest sources of general revenue are individual income taxes, and sales and use taxes.

Category A, the highest priority, would be allocated $5.3 billion, including $60.3 million for the restricted reserve account.

Categories B and C would each be allocated $90.6 million.

Category D, the lowest priority and a new category, would be allotted $212.2 million, including $15.8 million more for the restricted reserve account.

The state's latest general revenue forecast would fund categories A, A1, B and C, but not D.

But if tax collections exceed the forecast, Category D spending could be funded.

Under the Revenue Stabilization Act in SB83 and HB1096:

• The proposal would allocate $1.8 billion to the Department of Human Services, and provide funding of $1.71 billion in Categories A, A1, B and C in fiscal 2021. The unfunded Category D would include $86.6 million for the department.

• The Division of Correction would be allotted $362.8 million and receive $361 million in fiscal 2021. The unfunded category D would provide $1.8 million.

• The Division of Community Correction would be allocated $96.2 million and receive $91.4 million in fiscal 2021. Unfunded category D would provide $4.8 million.

• The Department of Health would be allotted $82.8 million and would be provided $78.7 million in general revenue under Categories A, B and C. The unfunded Category D would give the department $4.1 million.

The March 23 cut trimmed the Health Department's general revenue budget by $3.4 million to $78.4 million in fiscal 2020.

The Revenue Stabilization Act would allocate $755.1 million to the state's colleges and universities, and would provide funding of $717.4 million in Categories A, B and C based on the latest forecast in fiscal 2021. The unfunded category D would include another $37.7 million.

• The University of Arkansas, Fayetteville, would be allocated $122.8 million and would get $116.7 million in Categories A, B and C in fiscal 2021. Unfunded Category D would provide $6.1 million. The fiscal 2020 budget cut reduced the university's general revenue budget from $122 million to $113.7 million.

• The University of Arkansas for Medical Sciences would be allotted $88 million under this proposal and be provided $83.6 million in Categories A, B and C in fiscal 2021. The unfunded Category D would provide $4.4 million. The fiscal 2020 cut reduced UAMS' general revenue budget from $88 million to $82.8 million.

Sen. Will Bond, D-Little Rock, on Wednesday withdrew his proposed amendment to the Revenue Stabilization Act that would require the state's chief fiscal officer to transfer $4.8 million from the long-term reserve fund to a UAMS fund for personal services and operating expenses.

Bond told the Joint Budget Committee that he trusts that lawmakers will be committed to funding UAMS through additional means in the next few months because UAMS is taking a hit in both its state and clinical revenue.

Senate President Pro Tempore Jim Hendren, R-Sulphur Springs, added that he is committed to taking care of the health care workers at UAMS and other institutions.

Earlier Wednesday, the Joint Budget Committee approved Hutchinson's requests to tap the rainy-day and restricted reserve funds for $3.4 million for 18 public higher-education institutions that lost state funds in fiscal 2020 because of budget cuts and the productivity funding model, and tap the rainy-day fund for possibly $1.5 million more by June 30, 2021.

Under Arkansas Code Annotated 6-61-234 (f), "in any fiscal year for which the aggregate general revenue funding forecast to be available for state-supported institutions of higher education is greater than two percent (2%) less than the amount provided for the immediate previous fiscal year, the [Division of Higher Education] shall not further implement the productivity-based funding model in the following fiscal year." 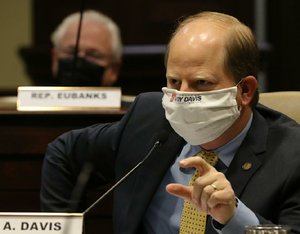 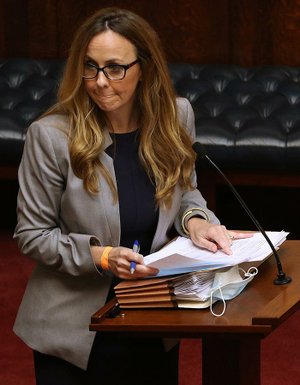