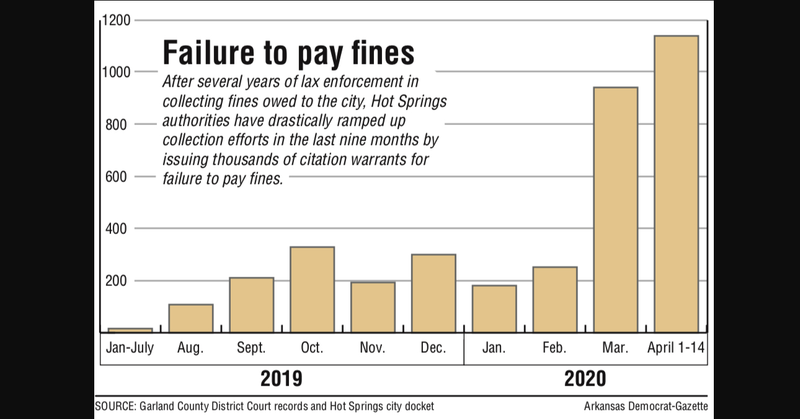 HOT SPRINGS — Once the coronavirus crisis has passed and life returns to more normal routines, people who have been ticketed in Hot Springs in the past are subject to an unwelcome surprise: old misdemeanor fines they never paid coming back to haunt them.

Since the beginning of this year, 2,515 failure-to-pay warrants have been issued, 1,140 in the first 14 days of April alone. The city is now awaiting warrant recipients to come to the attention of any law enforcement officer in Arkansas, at which time they will be issued citations and advised of the fines they owe.

The sheer number of failure-to-pay warrants issued in Hot Springs, with an estimated population of 37,325 residents according to the U.S. Census Bureau, has dwarfed those of much larger cities.

According to records on the AOC Court Connect public website, Pulaski County District Court issued 491 failure-to-pay warrants on the Little Rock city docket from Jan. 1 to April 14, and Craig-head County District Court issued 386 failure-to-pay warrants during the same time period on the Jonesboro city docket, for a combined 877 warrants. Little Rock has a population of 199,579, according to U.S. Census Bureau 2020 population estimates. Jonesboro’s population is an estimated 78,152.

The push to issue the warrants began before the coronavirus crisis, although the idling of Garland County District Court because of the pandemic did result in an uptick as court clerks’ other duties dwindled, giving them more time to input warrant data into the court’s system. Based on the statistics, the effort appeared to have begun in earnest in August. In the last five months of 2019, Garland County District Court issued 1,141 failure-to-pay warrants on the city docket. By comparison, in the first seven months of 2019, only 17 of the warrants were issued, 16 in March and one in May.

The dramatic rise in the number of failure-to-pay warrants issued in March and April caught the attention of Little Rock defense attorney Michael Kaiser, who expressed concerns that the number of warrants might lead to a sudden influx of jail inmates in Garland County at a time when authorities are trying to lower the risks of the coronavirus spreading into jail populations.

In an email to the Arkansas Democrat-Gazette, Kaiser wrote, “While Pulaski County and Washington County are actively trying to decrease the numbers in their county jails to prevent the introduction and spread of COVID-19, Hot Springs District Court is issuing Failure-to-Pay warrants at a record clip. More than 1500 failure-to-pay warrants issued in the first 10 days of April alone, some in cases dating back to before 2000.”

Kaiser expressed concern also over the apparent age of some of the offenses, a few of which originated in the early to mid-1990s.

“I run a small business and you know what I do when somebody owes me money from more than 20 years ago?” he said in a phone interview. “I write it off. I know, the easy answer is to say they owe the money and they should pay it. But the fact is most of these fines are in increments of $200 or less. They’re going to spend more money trying to collect than what they’re going to get out 0f it.”

Garland County District Judge Joe Graham said the aim of the warrants is not to jail people, and, in fact, he said the failure-to-pay warrants are very specific in that they are citation-only warrants, meaning whenever those named in the warrants are cited, they will be given a court date and told how much their fine is, but that is the extent of the warrant.

He said, also, that the citation warrants only come to light when the person has his driver’s license checked, such as for a ticket or arrest for another infraction.

“We’re not out knocking on doors, nobody is going to jail, and nobody is going to lose their driver’s license over these warrants,” Graham told the Arkansas Democrat-Gazette. “If they get stopped, the citation will show up when their license is run and they’ll be given a citation and told how much their fine is and when to come to court to arrange either a payment plan or a plan to work off their fine with community service.”

In the case of larger fines, Graham said people also have the option of serving 30 days in jail, at which time their fine, regardless of the amount, is taken off the books and considered paid.

“We’ve had a few people in the past with big fines, in the thousands of dollars, who have availed themselves of that option,” said the judge. “We don’t make them do it, but that option is available.”

Mark Allen, chief administrator for Garland County District Court, acknowledged the fact that the recent suspension of most in-person proceedings in courtrooms around the state has left the clerks with additional time to attend to other matters, including catching up on failure-to-pay warrants, which he said had been lacking in recent years.

“The failure to pay — we haven’t issued very many since 2015,” Allen said. “Now, since we have time to focus on this, that’s what the clerks are doing since we aren’t having court.”

Allen reiterated that the failure-to-pay warrants are citations only.

“When you pull somebody over, it’s just a citation where they get a court date to appear before the judge and they can start the process of paying their fines,” he said. “The warrant itself says cite and release. If the officer even tries to take them to jail on the strength of that warrant, the jail won’t take them.”

Allen said the clerks are focusing on 2015 through 2019 when issuing the warrants, although a number deal with outstanding fines that originated in the 1990s. However, Allen said, if any defendants have court actions that took place in 2015 or later, the system will pull up all outstanding fines, regardless of age, and the warrants will be issued.

Both Graham and Allen said, however, that the primary impetus behind the recent push was administrative rather than punitive. Allen explained that it is mostly a matter of setting the city’s books in order.

“As we’ve learned this system, we’ve tried to get our books in order, clear up any wrong information, and one of the by-products of that is these [failure-to-pay] warrants,” Allen said. “The main reason we’ve issued so many is that in years past we issued so few and now we’re getting caught up.”

Allen said the situation is also a matter of fairness.

“You know, you take a guy who’s working two jobs, raising a family, he got a ticket and a fine, and he’s working diligently to pay that fine off,” he said. “Then, over here, you’ve got folks who aren’t making any effort at all, and for years we didn’t even know who they were. Now, as the result of this process, we know.”

Allen said people who think they may have an outstanding fine owed to Hot Springs can contact the county clerk’s office for confirmation and to address options.