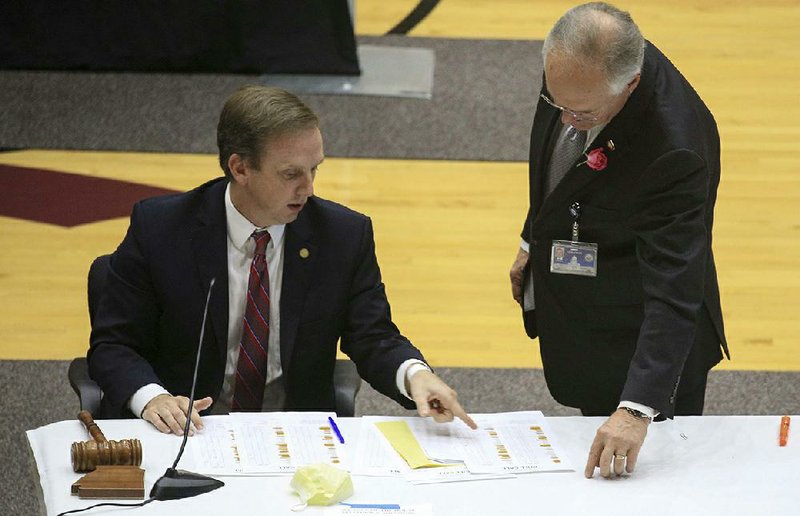 House Speaker Matthew Shepherd (left) and House Parliamentarian Buddy Johnson check the votes on a bill Thursday at the Jack Stephens Center in Little Rock as House and Senate lawmakers completed action on the budget for the coming fiscal year as they wrapped up their fiscal session. More photos at arkansasonline.com/417house/. (Arkansas Democrat-Gazette/Staton Breidenthal)

The Arkansas General Assembly on Thursday completed action on the state's general revenue budget of $5.89 billion for the coming fiscal year to wrap up its fiscal session amid the coronavirus pandemic.

But the latest revenue forecast would provide $5.68 billion for that budget in fiscal 2021, which starts July 1, and leave $212.2 million unfunded. On April 2, the state Department of Finance and Administration cut the fiscal 2021 forecast for net general revenue available to state agencies by $205.9 million, citing an expected recession from the pandemic.

"I'm very pleased with the fiscal session because we addressed the emerging needs as a result of the covid-19 crisis," Gov. Asa Hutchinson said. "We set the priorities for our revenue spending for the next [fiscal] year and we balanced the budget, which is required under our constitution.

"So they have done their job and they did it in a way that was quick and allowed people to protect their health," the Republican governor said Thursday afternoon at his daily covid-19 news conference.

The Senate voted 35-0 to approve House Bill 1096. Sen. Breanne Davis, R-Russellville, was recorded as voting for HB1096 -- a day after voting against the identical Senate Bill 83.

Davis said Thursday in a text message that "it was a mistake recording me as a yes today. I marked my proxy as a no vote on RSA today."

She said she intended to vote against the proposed Revenue Stabilization Act both times because ""it's the Legislature's job to effectively allocate resources [and] I do not believe we did our job."

Davis has been a critic of the state's higher-education productivity funding model, which is intended to reward schools with good graduation rates.

"We refuse to fund [Arkansas Tech University] equitably, yet we bend over backwards to ensure we give money to the worst performing institutions in the state," she said in her text message.

"That alone is enough to say we are not effectively doing our job. It's one of the many factors that continues to keep Arkansas ranking almost last in higher education nationwide."

Thursday was the ninth day of this year's fiscal session, the sixth ever.

Because of the pandemic, the House met in the Jack Stephens Center at the University of Arkansas at Little Rock and the Senate met in its chamber with lawmakers spread out from one another.

Most lawmakers wore masks. Some lawmakers voted by proxy.

In a special session from March 26-28, the Legislature authorized Hutchinson to create a $173 million covid-19 rainy-day fund to fill budget holes and cover unanticipated needs resulting from the pandemic.

Hutchinson attributed the fiscal 2020 budget cut to the economic impact of the pandemic -- a projected drop in tax collections in the fiscal year's final three months and shifting the state's April 15 deadline for individual income tax filings and payments until July 15 to coincide with the federal government's extension of those deadlines.

Also Thursday, Hutchinson won the approval of House and Senate leaders to transfer $21.1 million out of the covid-19 rainy-day fund for the University of Arkansas for Medical Sciences and for the Department of Corrections, according to Senate President Pro Tempore Jim Hendren, R-Sulphur Springs, and House spokeswoman Cecillea Pond-Mayo.

Larry Walther, secretary of the Department of Finance and Administration, said Thursday in a letter to lawmakers that UAMS requested a transfer of $5.7 million from the covid-19 rainy-day fund that "reflects its total loss in general revenue to the institution" from the March 23 budget cut.

The Department of Corrections requested a transfer of $15.4 million, which "reflects the amount which the department believes will be necessary to maintain operations for the remainder of the current fiscal year under the most-recent revenue forecast," Walther wrote in his letter.

In late March, Hutchinson won the approval of legislative leaders to transfer $45 million out of the covid-19 rainy-day fund to the Arkansas Division of Emergency Management and Department of Finance and Administration to purchase personal protective equipment and ventilators for health care professionals and first responders who are testing and treating patients who have contracted covid-19.

These transfers totaling $66.1 million out of the rainy-day fund will leave a balance of $107.4 million, Walther said in his letter.

But Walther wrote, "please be aware that I have requested reimbursement on behalf of the covid-19 rainy day fund from monies made available to the state through the C.A.R.E.S. Act, which was recently adopted by Congress.

"Among other actions, the C.A.R.E.S. Act has made federal funding available to reimburse states for costs incurred responding to the covid-19 virus," he wrote in his letter. "When final, the reimbursed amounts will be available for purposes authorized under Act 1 of the First Extraordinary Session. Reimbursed amounts will be reflected on future reports to the General Assembly."

Priorities for general-revenue spending are set in the Revenue Stabilization Act, which is passed every year and keeps the state from deficit spending. The state's two largest sources of general revenue are individual income taxes, and sales and use taxes.

Category A, the highest priority, would be allocated $5.3 billion, including $60.3 million for the restricted reserve account.

Categories B and C would each be allocated $90.6 million.

Category D, the lowest priority and a new category, would be allotted $212.2 million, including $15.8 million more for the restricted reserve account.

The state's latest general-revenue forecast would fund categories A, A1, B and C, but not D.

But if tax collections exceed the forecast, Category D spending could be funded.

Sen. Larry Teague, D-Nashville, said he hopes the general-revenue forecast in fiscal 2021 meets the finance department's projection to fund Categories A, A1, B and C.

He said he always worries about tax collections not meeting the forecast.

"The upsides [in tax collections] are easy," said Teague, who is a co-chairman of the Joint Budget Committee. "Heck, I hope D is funded."

The proposal would allocate $1.8 billion to the Department of Human Services, and provide funding of $1.71 billion in Categories A, A1, B and C in fiscal 2021. The unfunded Category D would include $86.6 million for the department.

Hendren said he expects lawmakers to return on April 24 to formally end the fiscal session.

House Speaker Matthew Shepherd, R-El Dorado, told the House that lawmakers could return as soon as April 24 and possibly as late as May 22 to formally end the fiscal session.

"I think the exact day still remains to be seen," he said afterward. "It's just that we need to make sure that there is enough time to see what the governor's actions are with regard to these bills. Assuming everything gets transmitted today or tomorrow, then I believe by next Friday we would be beyond the time period in which he would have to act so we would know."

Hutchinson said he doesn't expect to veto any bills approved in the fiscal session.

"Although we are going to have over a hundred bills coming to my desk in the next couple of days, we want to have a chance to review them," he said.

"But I am not aware of any bills at this point that will need my veto or that we have extraordinary concerns about. ... We want to look at the language. We make that determination separately, but I don't anticipate that being the case." 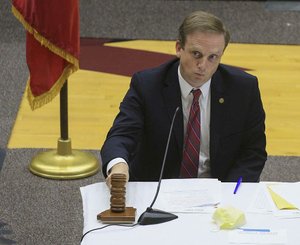 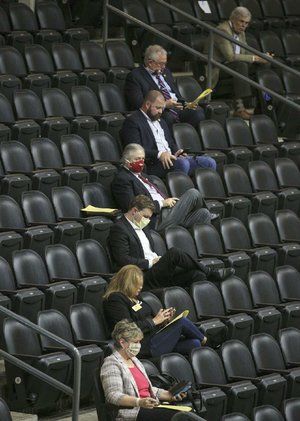 Photo by Staton Breidenthal
Members of the House wait Thursday at the Jack Stephens Center in Little Rock for their names to be called as they vote on legislation during the final day of the fiscal session. More photos at arkansasonline.com/417house/. (Arkansas Democrat-Gazette/Staton Breidenthal)