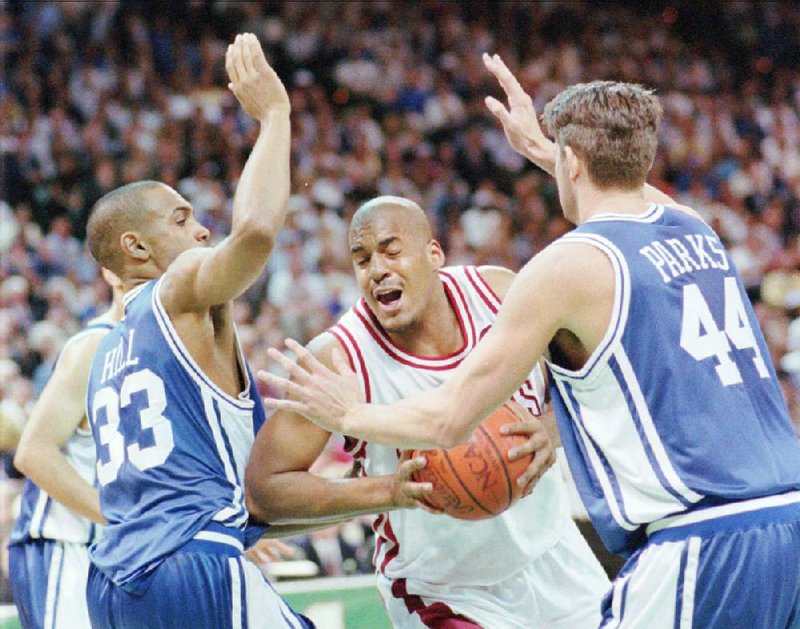 "After everybody else got a chance to touch it, I just grabbed it," McDaniel said. "This is going to be my girlfriend for the next few hours."

This article originally appeared in the April 6, 1994, edition of the Arkansas Democrat-Gazette.

When the Razorbacks returned to their hotel, McDaniel put the trophy on a nightstand and slept beside it.

"When I woke up and saw the trophy," he said, "I knew I hadn't been dreaming."

McDaniel's free throw with nine seconds left clinched the victory over Duke, but as usual there were many heroes for the Razorbacks.

Sophomore forward Corliss Williamson overcame an 0-for-5 start from the field to score 23 points -- he finished 10 of 24 -- with eight rebounds. Williamson, who had 29 points, 13 rebounds and 5 assists in the Hogs' 91-82 victory over Arizona on Saturday, was voted by the media as the Final Four's Most Outstanding Player.

Joining Williamson on the All-Final Four team were Beck, who had 15 points, 10 rebounds and 4 assists against Duke, and Razorbacks sophomore guard Scotty Thurman.

Thurman scored 15 points Monday night, including what turned out to be the game-winning three-point basket that put the Razorbacks ahead 73-70 with 50.7 seconds to play. The 35-second shot clock was about to expire when Thurman let go of a shot sure to go down in Arkansas and NCAA Tournament history.

"I saw the shot clock running down," said Thurman, who also hit game-winning three-pointers against Tennessee and LSU this season. "When I got it from Dwight (Stewart) with three seconds left, I had no choice but to put it up."

Duke senior forward Antonio Lang contested Thurman's shot and said he almost got a hand on it.

"We've made big shots to win games," Lang said. "I guess it was just Arkansas' turn to make a big shot."

Despite the performances of Williamson and Thurman, Arkansas Coach Nolan Richardson said his choice for MVP was Beck.

"I was so proud he made the all-tournament team," Richardson said. "If I had an NBA job, Beck would be my first choice. Because I want to win, and he's a winner."

Grant Hill, Duke's senior All-American forward who will be some NBA team's first-round choice, hit a three-pointer with 1:29 to play to tie the score 70-70, but struggled much of the game. He finished with 12 points on 4-of-11 shooting from the field and had nine turnovers.

"Hill is their workhorse, and we tried to keep pestering him," Richardson said. "I think fatigue set in."

Richardson said beating Duke in its home state added to the Razorbacks' accomplishments. He compared it to his first Tulsa team beating Syracuse for the NIT championship in New York.

"When you beat a team in its own backyard, that's sweeter than any juice you'll ever drink," he said. "I thought it was a game between two of the smartest coaches in the country -- I was one of them -- and two talented basketball teams.

"They had three players with gold rings (for national championships in 1991-92) and we had a bunch of young guys trying to keep them from getting another one and trying to get one for themselves.

"You put all that together and it's a heavyweight boxing match. If wasn't a knockout, but we won by unanimous decision."

The Razorbacks were on the ropes when Duke went on a 13-0 run to take 48-38 lead with 17 minutes to play, but they didn't panic. During the season, they trailed by 15 at Kentucky in the first half and came back to win 90-82.

"It's all about being on a mission."

The Razorbacks' mission all season has been to win Arkansas' first NCAA basketball championship and gain respect nationally.

"All we wanted was a little respect," Thurman said. "But we won the whole thing, so I guess we got a lot of respect."

A nice championship trophy, too. 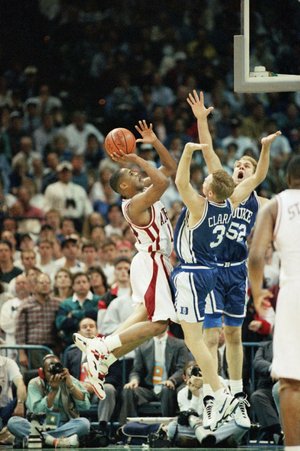 Arkansas’ Corey Beck shoots over Duke’s Marty Clark (3) and Erik Meek (52) during the second half of the NCAA Tournament championship game on April 4, 1994. (AP file photo) 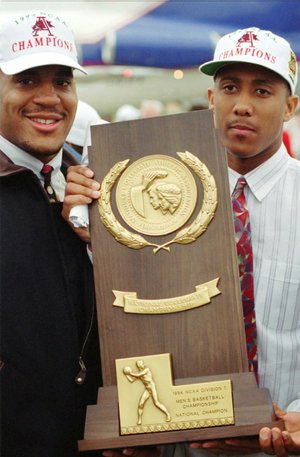 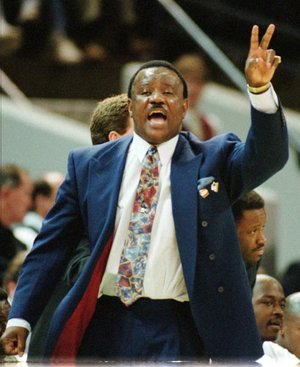 Photo by AP
Former Arkansas Coach Nolan Richardson directs his team during the first half of the NCAA Tournament championship game on April 4, 1994. (AP file photo)