Evictions in state not on pause, analysis shows; amid pandemic, courtroom closures, at least 300 filed since March 11 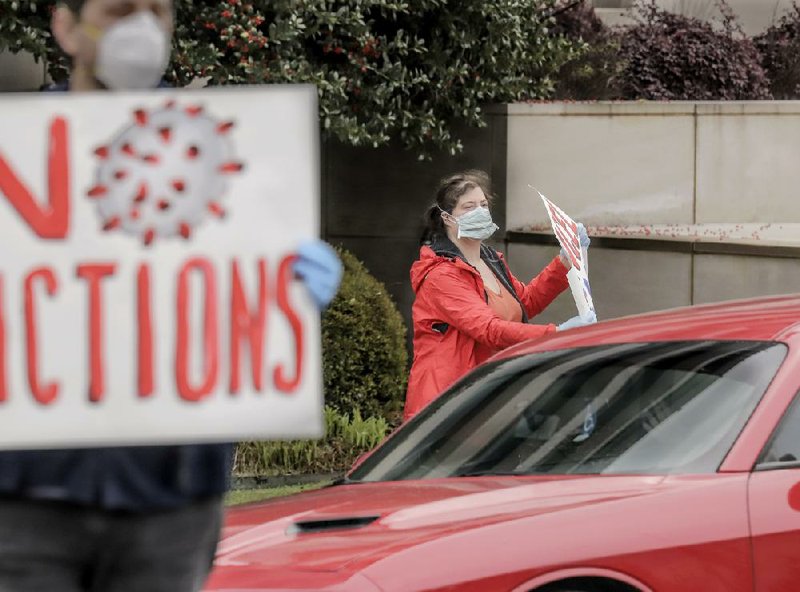 Acadia Roher and Greg Moore (left) take part in a “social distancing protest” outside the state Capitol on April 3 as part of a group seeking a moratorium on renter evictions. The group, Arkansas Renters United, is calling on the state and the federal government to give renters relief until the coronavirus outbreak subsides. (Arkansas Democrat-Gazette/John Sykes Jr.)

Although Arkansas officials predicted that few renters would be evicted during the coronavirus crisis, an Arkansas Democrat-Gazette analysis has found at least 300 evictions filed under the state’s unlawful-detainer law since March 11, when the state saw its first case of the virus.

That number is likely an underrepresentation because some jurisdictions don’t post unlawful-detainer filings online, and many evictions take place outside the court system — through landlord notices or other means.

A separate analysis from a University of Arkansas at Little Rock law professor who specializes in housing issues found that there had been 54 unlawful detainers filed for nonpayment of rent between March 27 and April 15. Pulaski County had the most, followed by Washington County.

Gov. Asa Hutchinson has so far resisted a moratorium barring landlords from evicting renters during the coronavirus crisis, saying it is his office’s understanding that most eviction actions filed since last month have not been a result of the pandemic.

He’d previously said that with courts closed to in-person proceedings, most evictions weren’t going through.

Renters’ rights advocacy groups have pushed for such a moratorium. Arkansas Renters United sent a letter to the governor March 16 and organized a “social distancing protest” in Little Rock on April 3.

Representatives from the Landlord Association of Arkansas said they’re recommending that members work as much as possible to assist tenants who can’t pay their rent. Large numbers have lost jobs in recent weeks, and landlords shouldn’t risk their own health showing empty apartments to potential residents, the group said.

“People need to stay home, and they have to have a home to stay in until this is over,” said Neil Sealy, an advocate with Arkansas Community Organizations.

“In light of the circumstances, latitude should be granted to those who have been laid off or are struggling financially,” Hutchinson’s emailed statement to the newspaper read. “Anyone needing assistance should reach out to legal aid or a community support organization but there is not a need for government action at this time.”

Many states such as Delaware, California, Idaho and Louisiana have issued eviction moratoriums.

Riley Pennington, one of the Little Rock protest attendees, said if he can’t pay his rent by April 20, he’s not sure what he and his family will do. The Little Rock resident hasn’t been able to get in touch with the corporate office in Missouri that owns his apartment complex to find out whether it will work with him on the rent. He’s scheduled to start accruing late fees Monday.

Pennington lost his bar-tending job in March. His wife, who also worked in the restaurant business, was furloughed. They have a 6-year-old and an almost-2-year-old to support.

He hadn’t been able to get through over the phone to file for state unemployment benefits as of late last week.

Judge Ralph Wilson Jr. suspended petitions for writs of possessions until further notice in Clay, Craighead, Crittenden, Greene, Mississippi and Poinsett counties, according to a report from Lynn Foster, a University of Arkansas professor at the William H. Bowen School of Law. Foster was also the vice chairwoman of a nonlegislative commission created by the General Assembly in 2011 to study Arkansas’ landlord-tenant laws.

Judge Vann Smith issued a similar order for Pulaski and Perry counties, though that order excludes Circuit Judge Tim Fox. Under the order, which Smith said he plans to review next week, Fox is still allowed to process eviction cases.

Smith said he made the allowance at Fox’s request. Fox could not be reached for comment late Friday.

Smith added that it seems that the coronavirus crisis is lessening, so courts may be able to start hearing eviction cases again.

“That was a pretty stringent order,” Smith said, of the need to reevaluate.

Although tenants have an opportunity to respond to eviction filings, Foster said in her report that many tenants don’t know that.

“So many tenants begin to try to move out and don’t respond, clearing the way for the clerk to issue a writ of possession because they have not responded, without any judicial review,” she wrote.

Sealy said this is often the case with people whose landlords post eviction notices on their doors without going to court. He’d like to see the governor issue an eviction moratorium that includes a ban on this method, called notice-evictions.

“We just have to make sure that it’s comprehensive,” he said.

Gail Blucker, the landlord association executive director, said she thinks most landlords are working with their tenants to get paid the rent owed, rather than evicting. Blucker manages 12 single-family rental homes in Sherwood and Jacksonville.

“The only real problem that we’ve had are the tenants that are trying to use that as an excuse,” Blucker said. “We’ve had concerns about people trying to take advantage of the situation.”

But, she added, if tenants are out of work, she’s encouraging landlords to work with them. She has payment plans in place with a few tenants.

“We don’t really like having empty properties,” she said.

Beth Pasmore, a Jonesboro landlord and the secretary of the northeast landlord association chapter, said she expects it will be harder next month for many tenants to pay their rent because some will have spent their savings and their federal stimulus checks.

“The key to it is to work with your landlord and your tenant,” Pasmore said. “It goes both ways.”

Kenneth Grand works in the restaurant and catering business and lives with a housemate in Little Rock.

With the onset of the coronavirus, no one was ordering food for catered parties, and profits dropped by about 90%, he said. His landlord told him he’d soon be evicted.

“We had to kind of hustle around, and I picked up a couple extra little jobs for people around the neighborhood,” Grand said.

He also worried what an eviction would do to his credit score and ability to find a new place to rent.

Joel Doelger, director of community relations and housing counseling for Credit Counseling of Arkansas, said evictions don’t appear on credit reports unless the landlord sells the debt to a collection agency. But debt selling is a fairly common practice, he said.

Right now his group isn’t getting an increase in calls about how to maintain good credit, but he expects that will begin in the next few months. Meantime, he’s available for phone appointments. 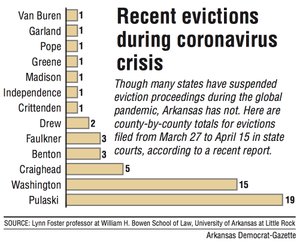 Print Headline: Evictions in state not on pause, analysis shows