SAN MARCOS, Texas -- A man who killed one Texas police officer and wounded two others before killing himself was wearing body armor and waiting to ambush them when they arrived at his home in response to a domestic violence call, authorities said Sunday.

"We lost a fine young man, a faithful officer and friend last night," Klett said of Putnam. "He understood what it took to police a wonderfully diverse community like San Marcos." 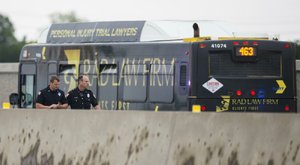 He tentatively identified the shooter as a 45-year-old local man, Alfredo Perez de la Cruz, but he said he and the Texas Rangers were still working to confirm the man's identity because he apparently went by different names. His criminal record was not immediately available.

The officers responded to a 911 call about a man in the apartment who had hit is wife and was threatening other family members who were there.

After speaking with a family member in the parking lot, the officers decided to enter the building because they believed people inside were still in danger, Klett said. The suspect fired on them with a rifle as soon as they entered, he said.

After the initial shooting, a tactical team went into the apartment to confront the attacker and found him dead of an apparent gunshot wound, Klett said. None of the other family members were seriously hurt.

CHEYENNE, Wyo. -- Joe Biden has won Wyoming's Democratic presidential caucus, which had been postponed for two weeks and scaled back to just mail-in ballots because of the coronavirus pandemic, state party officials said Sunday.

The results come less than two weeks after Bernie Sanders dropped out and endorsed Biden, who is the only candidate still actively seeking the Democratic nomination. Voting began when it was still a two-candidate race.

Biden gets 12 delegates and Sanders gets two.

AUBURN, Calif. -- The former mayor of a Northern California city who stepped down after he harshly criticized President Donald Trump and his supporters died Saturday in a plane crash, the Sacramento Bee reported.

Dr. Bill Kirby, who was the mayor of Auburn, died in the crash Saturday morning near the Auburn Municipal Airport, officials said.

Kirby, a urologist, was the pilot of the plane that crashed shortly after 11 a.m., the newspaper reported. A passenger in the plane suffered minor injuries and was transported to a hospital, according to the California Department of Forestry and Fire Protection.

A Facebook post from Sacramento political consultant Jeff Raimundo carried a statement from the Kirby family confirming he was the victim.

"Our family is devastated by this tragic news," the statement by the family said. "Bill devoted decades of enthusiastic and loving support to his family, his patients and the Auburn community he loved so much. We will miss him immensely but take comfort in knowing he died while flying -- one of the other loves of his life."

Kirby, 72, had been a licensed pilot since at least 2009, according to public records.

ROWLETT, Texas -- A passenger opened fire on a Dallas-area public bus on Sunday before hijacking it and leading officers on a chase that ended in a shootout in which the passenger was killed and two officers were wounded, an official said.

The man got on the bus in Richardson, just north of Dallas, about 11 a.m and opened fire, shattering windows, said Gordon Shattles, a spokesman for the Dallas Area Rapid Transit system. He then hijacked the bus and eventually led officers on a chase eastward before police used a spike strip to stop the vehicle in the suburb of Rowlett, Shattles said.

The man opened fire upon exiting the bus, leading officers to fire back, killing him, said Shattles, who didn't release the suspect's name. A public transportation officer and Garland police officer were shot and wounded, but their injuries weren't considered life-threatening, he said.

There was one other passenger on the bus during the chase, but that person wasn't injured, Shattles said.