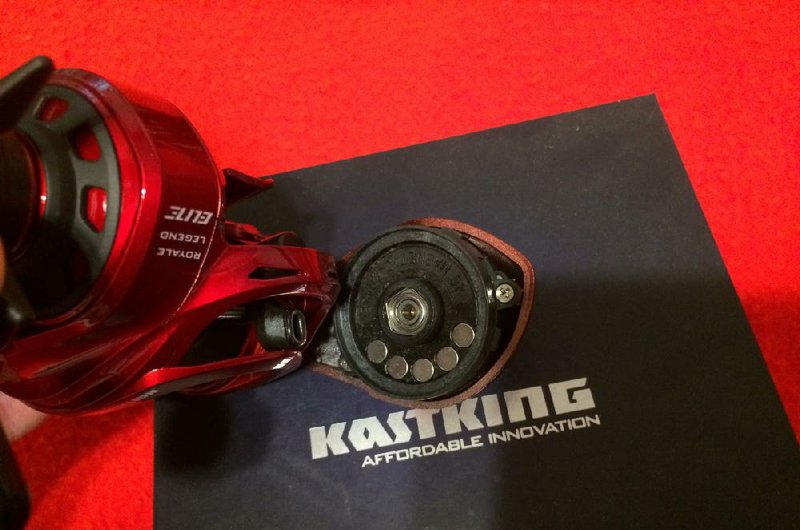 The KastKing Royale Legend Elite has an advanced magnetic braking system that compares with the friction-controlled brake on the older Shimano Curado 201G7. Both are excellent baitcasting reels. (Arkansas Democrat-Gazette/Bryan Hendricks)

We started fishing with a spincast rig and we mastered the spinning reel, but we will encounter situations that demand a baitcasting rig.

There are two styles of baitcasters. The round design, exemplified by the Abu Garcia Ambassadeur style, is traditional. The low-profile design sits lower on the rod and feeds line down the rod at a flatter angle, allowing for smoother, longer casts. Functionally and operationally, there is no difference.

To cast, hold the spool with the thumb of your casting hand while pressing the release bar with the lower portion of your thumb. Load the rod with your backcast and then lift your thumb from the spool at the release point. The instant the lure touches water and stops moving, press your thumb to the spool and engage the drive system by turning the reel handle forward.

Without question, the steep learning curve is the one downside to a baitcasting rig. Beginners will experience frustrating backlashes that snarl line, but don't despair. It happens to the most experienced anglers, too. Bass tournament anglers call the backlash, or "birds nest," a professional overrun. I've had some that were serious enough to disable the reel for the rest of the day.

Here's how it happens. Line piled up on a spool essentially increases the diameter of the spool. When you launch a cast, the spool, where the diameter is smallest, moves faster than the line whose diameter continually increases. The outer line layer moves the slowest, acting to brake the inner wraps. This braking action causes loops to form that tangle with the slower moving line above.

Preventing a backlash requires manually braking the spool by gently applying your thumb to the rotating spool. The newest, most modern reels have internal magnetic or friction braking mechanisms. You can adjust brake tension with a dial or by adjusting magnets through a swinging side panel. Internal brakes work very well, but they do not eliminate the need to thumb brake. No matter what you do, you cannot totally negate the dynamic of line spinning at non-uniform speeds. It will pack increasingly loose over time until the inevitable backlash occurs.

That is why professional anglers, who all rely almost exclusively on baitcasters, change line every night. That's fine if you have a sponsor that gives you unlimited supplies of line. The rest of us must economize. You can repack your line by dropping line without a lure attached into the water behind a slowly moving boat and letting your line unwind in the wake. Water friction will unwind it without any effort from the angler. Reel it back in, and you're almost as good as new.

Removing a backlash is easy. If it happens, press your thumb down hard on the spool and crank the reel handle three or four times so that the spool moves with difficulty under your thumb. Then, release the spool and pull out the backlash. I don't know how this works, but it does. In the rare instance when it doesn't, identify the offending loops and gently pull them free as you strip line from the spool.

Once you master the timing of cast and thumb-braking sequence, you will fall in love with the baitcaster's smoothness. Casting is an instinctive, effortless motion, and thumb braking does not significantly reduce casting distance.

Baitcasters are also very versatile. With the flipping and pitching techniques, which we will cover later in this series, you can deliver lures into tiny openings in tight cover where big bass lie. You cannot do this reliably with spinning rigs because of the split-second lag between splashdown and closing a spinning reel's bail. A bass in tight cover often bites the instant a lure touches the water, and the spinning reel lag will cause you to miss that fish. A slight tap of a baitcaster's handle engages the spool, allowing you to set the hook and begin horsing the fish out of cover in one deft movement precisely when the strike occurs.

For this same reason, baitcasters are better than spinning rigs for topwater lures. A topwater lure is the ultimate reaction lure, and it should be moving, spitting water and making noise the instant it touches the surface. That means you must engage the reel and begin the retrieve a split second before the lure actually touches the water. That's easy to do with a baitcaster, but nearly impossible with a spinning reel.

The same is true with crankbaits, which also need to be moving the instant they touch water. The snappy action of a baitcaster enables a crankbait to dive without any lag. With a spinning reel, the lure will sit on the surface for an instant until you close the bail and begin the retrieve. That can scare fish and cost strikes.

Baitcasters shine with finesse techniques. With bottom contact baits like soft plastic worms and creature baits, and also jigs, you often have to provoke a bass to bite by imparting subtle action to the lure. You can tap the handle of a baitcasting reel to make a lure move a few millimeters. One-eighth of a turn of a spinning reel handle takes up a lot of line. Even though that is a subtle movement for a spinning reel, it can move a lure out of a fish's strike zone.

To use the most effective fishing techniques, the baitcasting rig is peerless in its ease and versatility. It just takes practice. 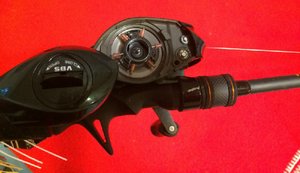 The KastKing Royale Legend Elite has an advanced magnetic braking system that compares with the friction-controlled brake on the older Shimano Curado 201G7 . Both are excellent baitcasting reels. (Arkansas Democrat-Gazette/Bryan Hendricks) 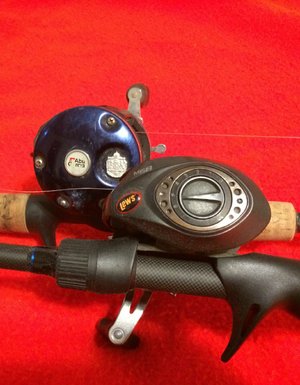