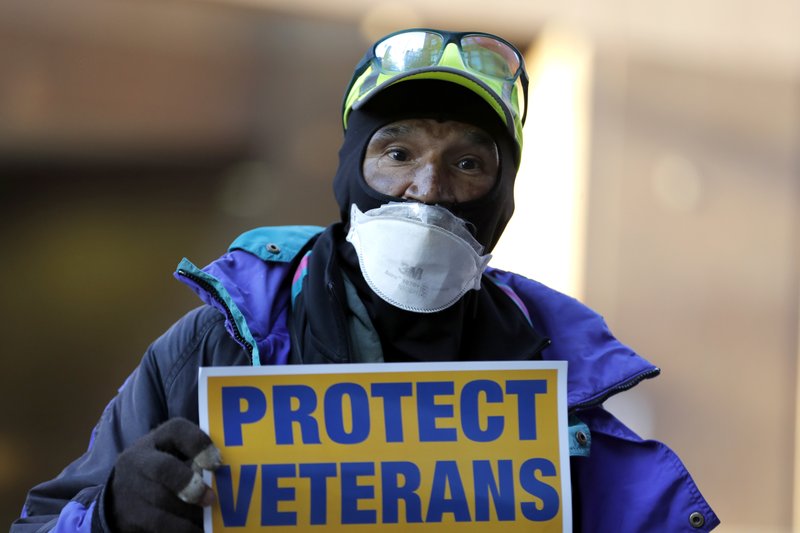 Clarence Shields, an Army veteran, pickets with a small group of activists from the American Federation of Government Employees local 424 and the National Association of Government Employees local R3-19 during the coronavirus pandemic, outside the Baltimore VA Medical Center, Wednesday, April 22, 2020, in Baltimore. The Department of Veterans Affairs is struggling with shortages of workers at its health care facilities as it cares for veterans infected with the novel coronavirus. (AP Photo/Julio Cortez)

BOSTON -- As the coronavirus spreads across the U.S., VA health care facilities are struggling with shortages of workers and the equipment necessary to protect employees from contracting the virus, according to VA staff and internal documents obtained by the AP.

Nearly 2,000 Veterans Affairs Department health care workers have become sick with covid-19, the disease caused by the virus, according to agency documents obtained by The Associated Press. Twenty have died. Another 3,600 of the 300,000-plus VA health care employees are quarantined and unable to work because they have been exposed to the virus, according to VA figures.

More than 5,700 veterans treated by the VA have been infected by covid-19, and nearly 380 have died.

The Labor Department is now investigating, and several Democrats in Congress sent a letter Thursday calling on President Donald Trump to invoke the Defense Production Act to get more supplies for VA health facilities.

The VA, responsible for the health care of 9 million military veterans, denied it was short of supplies and stressed that it follows federal health guidelines when rationing personal protective equipment like masks and gloves.

"VA's PPE conservation posture is precisely why the department has not encountered any PPE shortages that have negatively impacted patient care or employee safety," said spokeswoman Christina Mandreucci. She said the VA has moved aggressively in recent weeks to add staff, hiring 3,183 people, including 981 nurses, from March 29 to April 11.

All employees of the Central Arkansas Veterans Healthcare System have the appropriate personal protective equipment as specified by the Centers for Disease Control and Prevention, said Chris A. Durney, a spokesman for the health care system.

"The Central Arkansas Veterans Healthcare System offers comprehensive covid-19 screening, and we are equipped with essential items and supplies to handle a coronavirus cases," he said in an email.

Durney said the system's practices "are keeping our employees safe during challenging times and numbers prove it."

Durney didn't respond to questions asking how many covid-19 patients had been treated by the Central Arkansas Veterans Healthcare System.

When asked if covid-19 patients had put a strain on the facilities in central Arkansas, Durney said no.

He said three floors of one pod at the John L. McClellan Memorial Veterans Hospital in Little Rock have been converted to negative-air-pressure rooms in preparation for any surge in covid-19 patients, including any activation of the VA's "fourth mission" in Little Rock.

The VA's "fourth mission" involves providing a safety net for the civilian hospital system. In negative-air-pressure rooms, a machine pulls air into the room and filters the air before moving it outside. That helps prevent airborne diseases from escaping the room and infecting other people.

Spokeswomen for the Veterans Health Care System of the Ozarks in Fayetteville couldn't be reached for comment on Thursday.

But interviews with VA employees at facilities around the country, internal documents, and a March report by the agency's inspector general tell another story.

The facilities were short of staff and equipment such as masks, eye shields, hand sanitizer and gowns. Some workers were forced to reuse masks for days or weeks, according to interviews with VA nurses. In hard-hit states like New York, a crush of coronavirus patients led to a shortage of negative-pressure rooms to limit the spread of the virus, several VA nurses told the AP.

The VA inspector general's staff visited more than 230 facilities in March. It found that nearly a third of the medical centers could improve their processing for screening visitors. More than half of the medical centers reported shortages of supplies and equipment including respirator masks, and 10 reported shortages of staffing mostly for nurses in intensive care units.

"There has been a failure of leadership at VA, and veterans, VA employees and the public are suffering as a result," said Paul Rieckhoff, founder and former head of the Iraq and Afghanistan Veterans of America and now host of the podcast "Angry Americans."

"In VA facilities all over the country, they are doing a really incredible job trying to respond to the crisis in a situation where they have been deliberately crippled by the Trump administration," Gordon said.

But as the outbreak escalated in the U.S., surging demand for crucial medical equipment spurred competition for supplies, including from state governments and the national stockpile. The Federal Emergency Management Agency began buying supplies directly from manufacturers, and the VA began submitting its orders to FEMA alongside others.

Not long after, according to people familiar with VA's weekly briefings to Congress, the supply shortages got worse as medical workers burned through 250,000 masks a day.

On April 7, the VA issued guidelines asking workers to ration masks in response to what the department described as "shortages" and challenges in getting "adequate supplies" to protect VA staff, according to an internal memo.

Citing CDC guidelines, the VA said employees in direct contact with covid-19 patients should use N95 masks as protection but may need to reuse them. VA staff working with high-risk elderly or vulnerable patients, such as those in nursing homes or spinal-cord facilities, would only get one face mask per workweek.

After criticism from staff, and a small increase in supplies, the VA on April 16 said those employees working with high-risk elderly or vulnerable veterans could now have one face mask per day.

Individual medical centers have wide discretion if they face shortages, including allowing employees in direct contact with covid-19 patients to use surgical masks instead of N95 respirators and permitting staff to bring their own.

All other VA staff would be encouraged to bring in handmade masks, even if they work in a building where the disease is present.

A complaint filed by the American Federation of Government Employees alleges that VA workers who came in contact with someone suspected of contracting the virus were told on orders of VA Secretary Robert Wilkie that they still had to report to work -- ignoring a 14-day quarantine period. The Occupational Safety and Health Administration is investigating.

The staff and equipment shortages are creating chaos at the VA medical center in Brooklyn, N.Y., according to Maria Lobifaro, an intensive care nurse.

"Usually the ratio is one nurse to two critical patients. I'm having five critical ICU patients on ventilators," said Lobifaro, who also is a member of National Nurses United, which has organized protests as VA facilities in Brooklyn and Baltimore.

"This has happened four times in the last week and a half. It's to the point where ... my hands are trembling because of what I'm going to walk into," she continued. "I've never seen anything like this."

A group of Senate Democrats blames Trump for a "broken procurement and distribution system developed by this administration."

"Those who care for veterans should not be afraid to wake up every morning, go to work and help save veterans' lives," says a letter sent to the White House on Thursday by Sen. Jon Tester of Montana, the top Democrat on the Senate Veterans Affairs Committee. More than a dozen senators joined him, including Sens. Bernie Sanders of Vermont, Elizabeth Warren of Massachusetts and Kamala Harris of California, all former 2020 presidential contenders.

"We have the lowest employee infection rate in the world. It is less than half of 1 percent," he said Wednesday on MSNBC, citing higher rates in Italy and elsewhere in the U.S.

Irma Westmoreland, a nurse at the Charlie Norwood VA in Augusta, Ga., said it's hard for nurses to be tested, so no one really knows how bad the situation is.

"We are told if you have symptoms or feel like you have been exposed and you want to be tested unless you are veteran, you can't be tested," said Westmoreland, another NNU member, adding that employees are told go to their own doctors if they want to be tested.

"It's stressful for the nurses to be in this environment," she said. "But it's even more stressful when they don't have information they need."

Information for this article was contributed by Michael Casey and Hope Yen of The Associated Press; and by Bill Bowden of The Arkansas Democrat-Gazette.