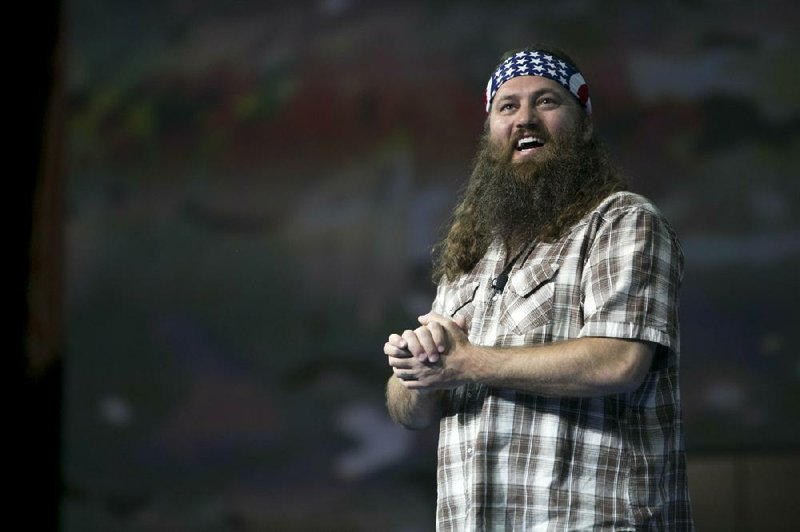 FILE - Duck Commander CEO and star of the reality television series Duck Dynasty, Willie Robertson speaks to the 6,000 domestic Walmart shareholders at Bud Walton Arena in Fayetteville, Ark., Wednesday, June 5, 2013. Mehgan Cook and Charlie Miller had a camouflage theme as they tied the knot at the new Field & Stream store in Butler County on Saturday morning, Aug. 17, 2013. The two hadn’t planned on marrying at the Cranberry Township store, but Cook said they were eager to meet “Duck Dynasty” star Willie Robertson. “I was going to cancel the wedding ‘cause I head Willie was coming,” she said. Instead, Cook said, her mother came up with the idea of a wedding at the store - and they got a surprise when Robertson appeared during the ceremony. (AP Photo/Gareth Patterson)

• A man has been arrested in connection with a drive-by shooting at the Louisiana estate of Duck Dynasty star Willie Robertson. Daniel King Jr. was booked into a correctional center on an aggravated assault charge after two homes in West Monroe were struck by gunfire on Friday afternoon, the Ouachita Parish sheriff's office said in a Facebook post. No one was injured in the shooting, authorities said. "It looks like they were just spraying bullets across my property," Robertson told The News-Star. Both homes are part of the estate belonging to Robertson, 48, one of the stars of the reality show about duck hunting that ran from 2012 to 2017. Robertson said the family was "pretty shook up" after one of the eight to 10 bullets he said were fired at the residence went through the bedroom window of a home where his son, John Luke Robertson, lives with his wife and infant child. Witnesses told Ouachita Parish deputies that the second residence was also struck by gunfire. Robertson said many family members have huddled at the estate during the coronavirus pandemic, including his daughter Sadie Robertson and her new husband. The newlywed was a contestant on the reality show Dancing with the Stars in 2014. "Nobody was outside at the time, but everybody had been out about five minutes before," Willie Robertson said. "I had just gone to the store when it happened." Deputies said other occupants were in the car with the suspect during the shooting but did not release more information about additional suspects. 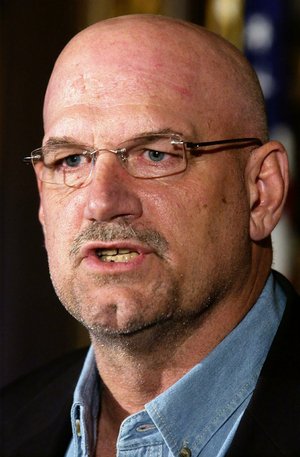 Photo by AP
**FILE**Minnesota Gov. Jesse Ventura reacts to the projected shortfall expected to hit $4.56 billion over the next 2 1/2 years during a news conference in this, Dec. 4, 2002 file photo, at the State Capitol in St. Paul, Minn. In an interview with The Associated Press on Monday, March 31, 2008, the former Reform Party governor said there's nothing that could get him back into politics. (AP Photo/Tom Olmscheid, file)

• Jesse Ventura once mused about being President Donald Trump's running mate. Now, he's considering running against him. The 68-year-old former pro wrestler, actor and Minnesota governor tweeted Monday that he is looking into a White House bid with the Green Party, one of the alternative U.S. parties. "OK, I've decided I'm going to test the waters," he wrote. "IF I were going to run for president, the GREEN party would be my first choice. I've endorsed the party and I'm testing the waters." He added that he has not filed any official paperwork and had only authorized a letter of interest be sent on his behalf to the Green Party. Ventura also flirted with running for president in 2016 and said in 2018 that he was considering a run this year. In 2015, he said during a radio interview with Trump associate Roger Stone that he would consider registering as a Republican to be Trump's running mate and hoped the businessman would win the election. "I shocked my staff today. I came in and said, 'You know what, as far as the Republicans are concerned, I said I hope Trump wins,'" Ventura said in an episode of his online TV show Off the Grid.