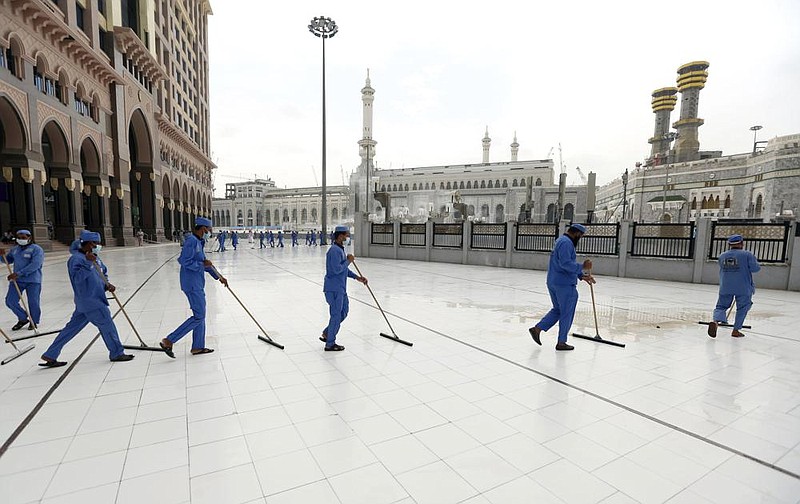 Workers in Mecca, Saudi Arabia, disinfect the ground outside the Grand Mosque on Monday, over fears of the new coronavirus. Between 1,000 and 10,000 people will make the pilgrimage, one of the five pillars of Islam, down from the around 2.5 million pilgrims who came to the holy site last year. (AP)

DUBAI, United Arab Emirates -- The vast white marble floors surrounding Islam's holiest site, the cube-shaped Kaaba in Mecca, would normally be packed with hundreds of thousands of pilgrims from around the world the day before the hajj.

On Tuesday, however, only a few officials and workers putting last minute preparations in place were seen at the Grand Mosque housing the Kaaba.

In place of the 2.5 million pilgrims who preformed the hajj last year, only a very limited number of faithful -- anywhere from 1,000 to 10,000 -- are being allowed to take part in what is largely a symbolic pilgrimage amid the coronavirus pandemic.

The select few approved for this year's hajj, which is taking place through Sunday, have been tested for the virus and are self-isolating in hotel rooms in Mecca, where they will experience an ancient pilgrimage -- albeit tailored this year for a modern-day global pandemic.

Amr Al-Maddah, the chief planning officer at the Ministry of Hajj, is helping incorporate the latest technology into the pilgrimage such as thermal scanners and electronic ID cards.

"Right now, technology is our black horse to developing the whole hajj journey," said al-Maddah, an electronics engineer with a Ph.D. in robotics and artificial intelligence.

"We are taking every step possible to make sure that this hajj will end with zero cases of covid-19 and also with zero deaths in our total hajj numbers," he told The Associated Press.

Before pilgrims could even enter Mecca, they were given wristbands by the Saudi health ministry to monitor their movements and ensure the mandatory quarantine was observed. Thermal scanners are being used across the holy sites to monitor people's temperatures.

Each pilgrim is assigned to a group of about 20 others. A group leader will guide them throughout the hajj to each destination at a specified time, to avoid crowding in places like the Grand Mosque, where Muslims circle the Kaaba and follow a path traveled by the Prophet Abraham's wife, Hagar, who Muslims believe ran between two hills searching for water for her dying son.

While on Mount Arafat, where the Prophet Muhammad delivered his final sermon nearly 1,400 years ago and where pilgrims spent Thursday in deep prayer and repentance, they were wearing high-tech ID cards that connect to an application on their phones.

The card and app allows the government to easily monitor the pilgrims, giving them a way to reach out to their group leader and make special meal requests.

The card stores the pilgrims' personal information, health status, residence and other hajj-related details. In the future, al-Maddah said the cards will be fitted with a location tracker to follow individual pilgrims' movements.

Pilgrims have also been given special attire to wear during the hajj laced with silver nanotechnology that helps kill bacteria and makes clothes water resistant. Al-Maddah said the measure is a precaution, "even if it can affect almost nothing" or has a minimal chance of "improving health conditions."

It's all part of the special treatment pilgrims are receiving this year. Other perks -- all meals, hotel accommodations, transportation and health care -- are paid for by the Saudi government. Typically, the hajj can cost thousands of dollars for pilgrims who save for a lifetime for the journey.

This year marks the first time in nearly a century of Saudi rule over Mecca that people from outside the kingdom will not take part in the five-day hajj, which is a once-in-a-lifetime requirement of Muslims.

Al-Maddah, who sits on the hajj planning committee, said allowing people to enter Saudi Arabia from abroad would have posed a global health risk.

Two-thirds of pilgrims this year are foreigners already residing in Saudi Arabia from among the 160 different nationalities that would have normally been represented at the hajj. The other one-third are Saudi security personnel and medical staff.

All pilgrims had to be between the ages of 20 and 50 with no terminal illnesses and showing no symptoms of the coronavirus.

Each year, the hajj poses a massive logistical challenge for Saudi authorities. As recently as 2015, a stampede and a crush killed more than 2,400 people.

Crowd control measures require the use of thousands of cameras and security officers to coordinate the movements of the more than 2.5 million people densely packed into narrow streets, walkways and paths of Mecca and Mina.

"For us, safety comes first," al-Maddah said. "We are employing technology to make sure that these services and these precautions are met and delivered in the highest standard."

This general view shows the Grand Mosque, at the Muslim holy city of Mecca, Saudi Arabia, on Monday ahead of the Hajj pilgrimage. Anywhere from 1,000 to 10,000 pilgrims will be allowed to perform the annual hajj pilgrimage this year due to the coronavirus pandemic. (AP) 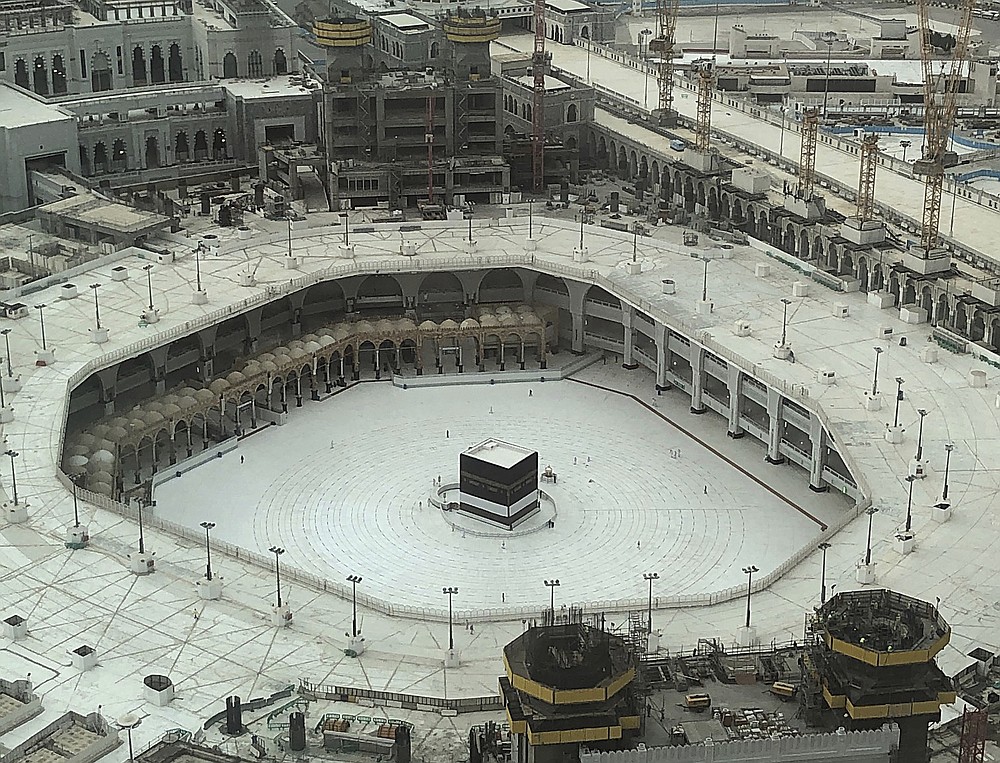 General view showing the Grand Mosque, at the Muslim holy city of Mecca, Saudi Arabia, Monday, July 27, 2020 ahead of the Hajj pilgrimage. Anywhere from 1,000 to 10,000 pilgrims will be allowed to perform the annual hajj pilgrimage this year due to the coronavirus pandemic. (AP Photo) 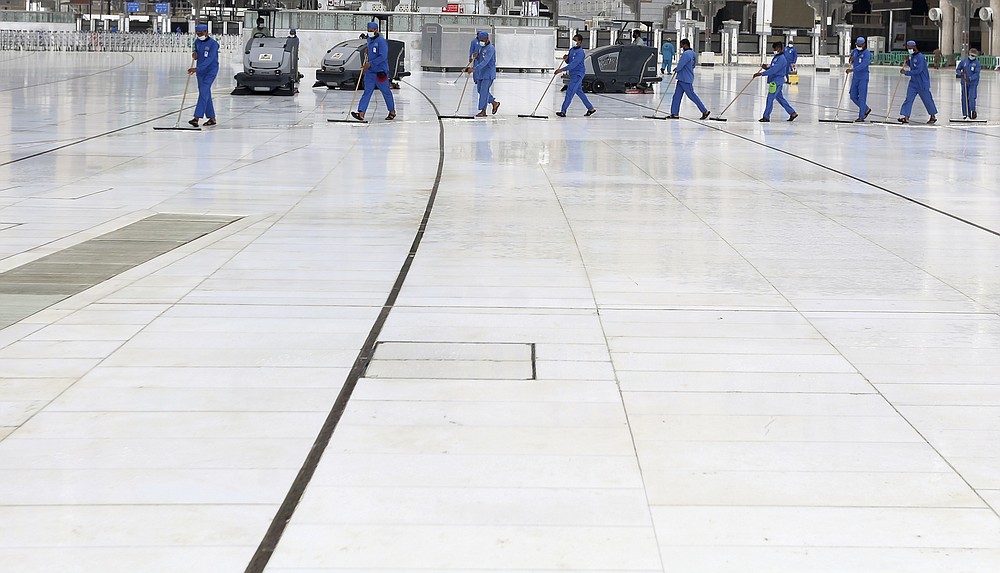 Workers disinfect the ground outside the Grand Mosque, over fears of the new coronavirus, at the Muslim holy city of Mecca, Saudi Arabia, Monday, July 27, 2020. Anywhere from 1,000 to 10,000 pilgrims will be allowed to perform the annual hajj pilgrimage this year due to the coronavirus pandemic. (AP Photo) 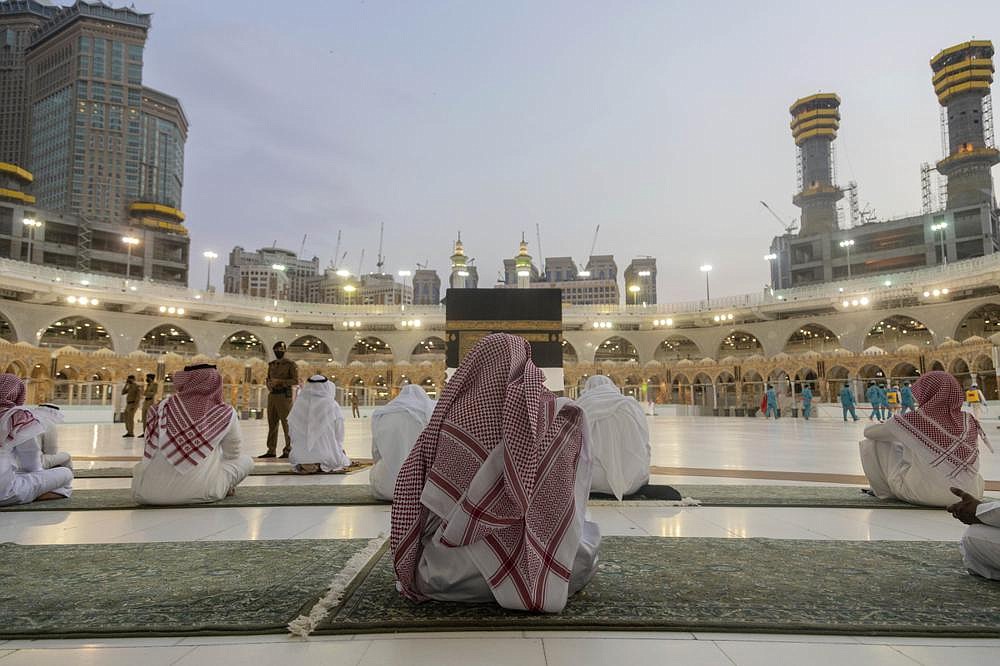 Pilgrims pray around the Kaaba, the square structure in the Great Mosque, toward which believers turn when praying, in Mecca, Saudi Arabia, on Sunday. (Saudi Ministry of Media via AP) 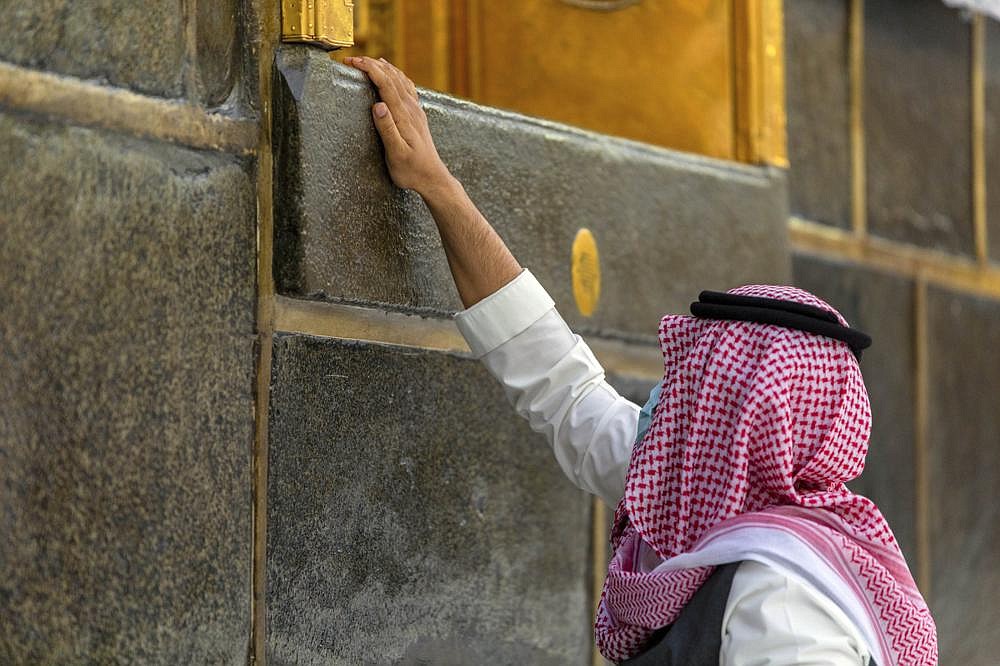 A pilgrim touches the Kaaba, the square structure in the Great Mosque, toward which believers turn when praying, in Mecca, Saudi Arabia. This year, pilgrims who have been tested for the new coronavirus will be fitted with wristbands to monitor their movements and led in groups of about 20 people to avoid crowding, among a number of measures being taken to prevent the spread of the virus. (Saudi Ministry of Media via AP) 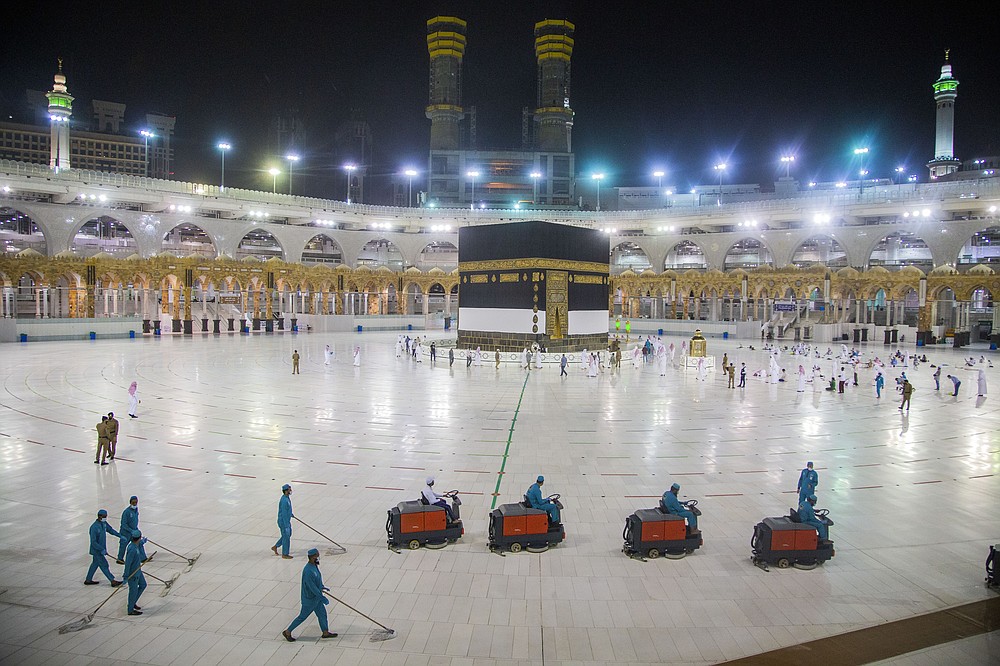 The area around the Kaaba is prepared for pilgrims, in Mecca, Saudi Arabia, Monday, July 27, 2020. Only about 1,000 pilgrims will be allowed to perform the annual hajj pilgrimage this year due to the virus pandemic. (Saudi Ministry of Media via AP)
ADVERTISEMENT