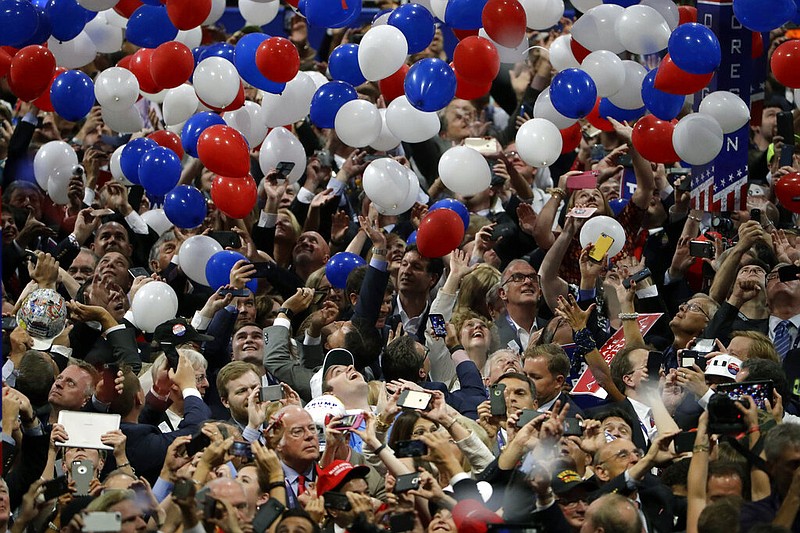 Confetti and balloons fall during celebrations after then-candidate Donald Trump's acceptance speech on the final day of the Republican National Convention in Cleveland in this July 21, 2016, file photo.

WASHINGTON -- When Republicans renominate Donald Trump for president in Charlotte, N.C., on Aug. 24, journalists won't be on hand to witness it, a convention spokesperson told the Arkansas Democrat-Gazette this week.

Reporters also will be kept from the room when the Republican National Committee meets to conduct official party business.

The spokesperson couldn't say whether C-SPAN, the nonprofit public service network, would be allowed to air the proceedings.

"[W]e are planning for all of the Charlotte activities to be closed press: Friday, August 21 – Monday, 24th given the health restrictions and limitations in place in the state," the convention spokesperson said in an email. "We are happy to let you know if this changes, but we are working within the parameters set before us by state and local guidelines regarding the number of people who can attend events."

Because of the coronavirus pandemic, the number of delegates at the Republican National Convention had already been lowered from 2,550 to 336. Alternate delegates have been disinvited. Media seating has been eliminated.

Barring a last-minute change, this will be the first Republican presidential nominating convention in history where reporters are not admitted.

Trump has had a sometimes-contentious relationship with journalists, branding them "the enemy of the American people" and labeling their stories "fake news."

The Republican Party's nominating convention was originally set for Aug. 24-27 in Charlotte, but the final three days were temporarily shifted to Jacksonville, Fla., after North Carolina leaders refused to waive covid-19-related crowd limitations.

But the number of cases and deaths in Florida subsequently spiked, leading to increased public health restrictions. There were also public safety concerns. County Sheriff Mike Williams, a Republican, told Politico that the city of Jacksonville was unprepared from "a law enforcement standpoint, from a security standpoint."

The president is scheduled to give his acceptance speech Aug. 27. Details such as the time and venue have not yet been announced.

With a global pandemic disrupting society, both parties have had to adapt.

The Democratic National Convention, originally set for July 13-16 in Milwaukee, will now take place Aug. 17-20. As few as 300 people are expected to attend, including party officials, security personnel and members of the news media, The New York Times reported.

The nation's media outlets have also scaled back.

Steve Scully, C-SPAN's political editor and "Washington Journal" host, said the network will have a reduced crew, but still plans to provide "gavel-to-gavel coverage of the proceedings" each night in Milwaukee.

Rather than an evening-long extravaganza, Democrats will offer two hours of messaging each evening, he said.

"It's going to be much smaller. You're not going to have all the pomp and ceremony," he said.

Former President Barack Obama is likely to speak on the second night, with the vice presidential nominee appearing on the third, Scully said. The fourth and final evening belongs to presumptive nominee Joe Biden.

Trump's programming, for the most part, remains a mystery.

"We're now three weeks from the Republican convention and we really don't have a clue right now in terms of the schedule," Scully said.

C-SPAN hasn't yet received press credentials to attend, though Scully expressed confidence that they will ultimately be issued.

C-SPAN will air the convention's business sessions if allowed.

"We're asking now if that's going to be open and we don't have answers to that," he said.

"There are a lot more questions than there are answers right now with regards to Charlotte," Scully said. "I think that the [Republican National Committee] has been scrambling to try to figure out what they're going to be doing."

Jonathan Salant, a reporter for NJ Advance Media and president of the Regional Reporters Association, has been to the last 18 political conventions.

Few regional reporters will be making the journey in 2020, he said.

"There's no credentials, but there's also nothing to cover," he said. "The state delegations will be staying home."