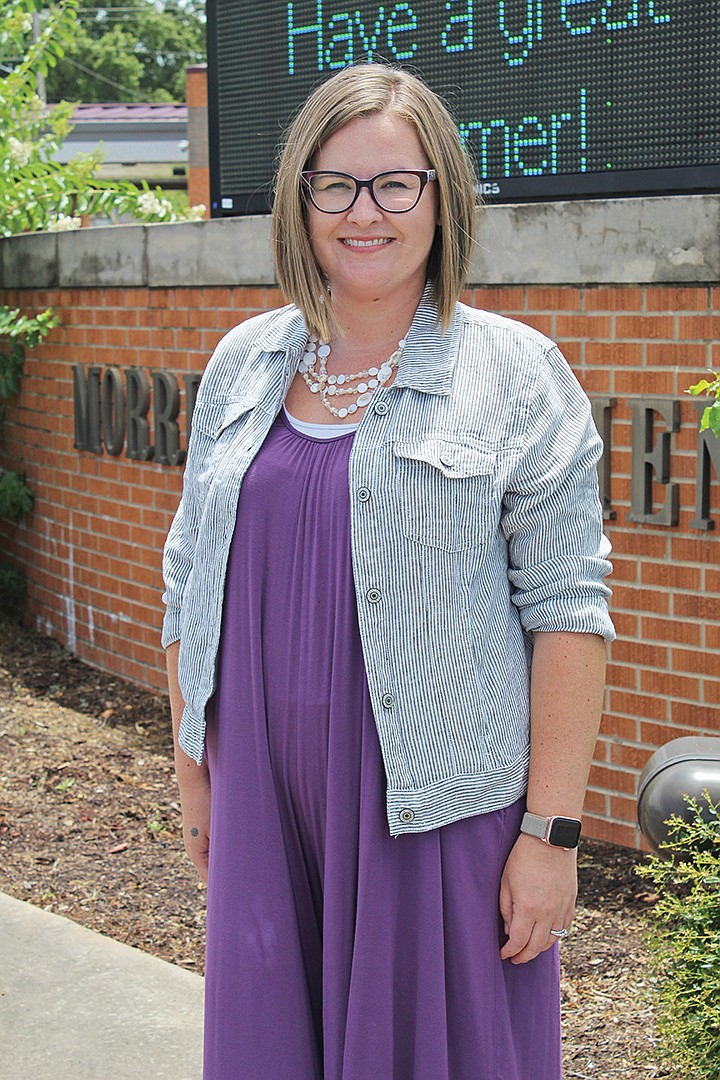 The biggest goal for Anna Henderson this year is making sure her students are as safe as possible. She said that while the goal may be kind of broad, due to the current COVID-19 pandemic, it is on the forefront of her and her staff’s minds at Morrilton Elementary School.

“Right now, we are worried about our students’ safety and health,” Henderson said. “We also want to make sure our staff members are safe, and there is a lot of planning to do and what-ifs to answer, so one of the biggest challenges is how it changes every day.

“The governor could come out and announce something, so we have to pivot and shift our focus to something else. Safety is our No. 1 priority right now.”

Henderson is the new principal at Morrilton Elementary School, replacing Laurie Stidham, who retired this spring. Henderson was hired in March, the week before schools were dismissed as a result of COVID-19. She said she began working at the school full time in May after she tied up loose ends at the intermediate school.

“The South Conway County School District is blessed to have Anna Henderson as the new Morrilton Elementary School principal,” said Lora Hendrix, associate superintendent of schools for the district.

“The district selected Anna because she is a person of character, leadership and commitment. She cares deeply about the safety, learning and achievement of every child and staff member,” Hendrix said. “She has already begun working alongside her new staff at Morrilton Elementary this summer as they develop Google Classroom videos, lessons and assessments in preparation for blended and off-site learning as a means to best serve our scholars in the upcoming school year.

“The SCCSD is excited about Mrs. Henderson in her new role as [Morrilton] principal. Her dedication to excellence continually shines through in conversations about curriculum, teamwork, student achievement and the best ways to meet the needs of our learning community.”

For the past seven years, Jo Beth Hoyt, a Gifted and Talented teacher, has worked with Henderson. Hoyt was also her first-grade teacher.

“As a child, she was eager to learn new things, kind and helpful to everyone …,” Hoyt said. “She was a pleasure to be around.

“Anna is the perfect choice for a leadership position in the uncertain times we are facing. She is passionate about everything she does, organized, technology savvy, and is always empowering others to be their best. Anna’s love for the people she serves and her dedication to others will make her a successful school principal.”

Henderson is starting her 10th year with the district, having served as assistant principal at Morrilton Intermediate School for the past two years, as well as the district’s Gifted and Talented director for the past six.

Morrilton Intermediate School recently completed a three-year journey as a Professional Learning Community Cohort 1 School, selected by the Arkansas Division of Elementary and Secondary Education. Recently, the school was recognized as a National Model PLC School as a result of its collaboration with grade-level teams and targeted focus on the needs of students.

“Mrs. Henderson was instrumental in assisting teams as they responded to learners to ensure success,” Hendrix said.

Morrilton Elementary has about 350 students enrolled for the second and third grades, including about 45 registered for virtual learning. Henderson said the deadline to enroll for off-site learning is in a few weeks, so more are expected, once the deadline gets closer. There are eight second-grade classrooms and seven third-grade classrooms, so the size of each classroom is expected to go down quite a bit.

“We want our parents to make the best decision for their family,” Henderson said. “I’m sending my own kid to school, and he will be here with me at the elementary school. But I’m confident that even if he wasn’t coming into this building, he would be safe because of the district’s overall plan.”

“The virtual option will work for some students, but know when you are thinking about the virtual-learning option to remember that it takes dedication from the parents, and it is also going to look completely different than March and May, when we were more reactive than proactive.”

She said that ideally, students in each classroom will remain in their own bubble by eating breakfast in the classroom, and teachers of all activity classes, such as art, music, and the gifted and talented program, will come to each classroom instead of allowing students to move about the building. Henderson said students will eat lunch in the cafeteria, but only about half of each grade will be there at a time so that social distancing can be maintained.

“We are going to be re-teaching procedures and also explaining why they have to stay 6 feet apart,” she said. “It is a whole new set of skills and new social norms that we have to teach our students.”

Henderson’s mom and aunt were both teachers in Morrilton but are now retired.

“I wanted to make the biggest difference and influence more kids, teachers and parents, and not be confined to one classroom,” Henderson said of why she wanted to go into administration. “I wanted to make a greater impact on our community.”