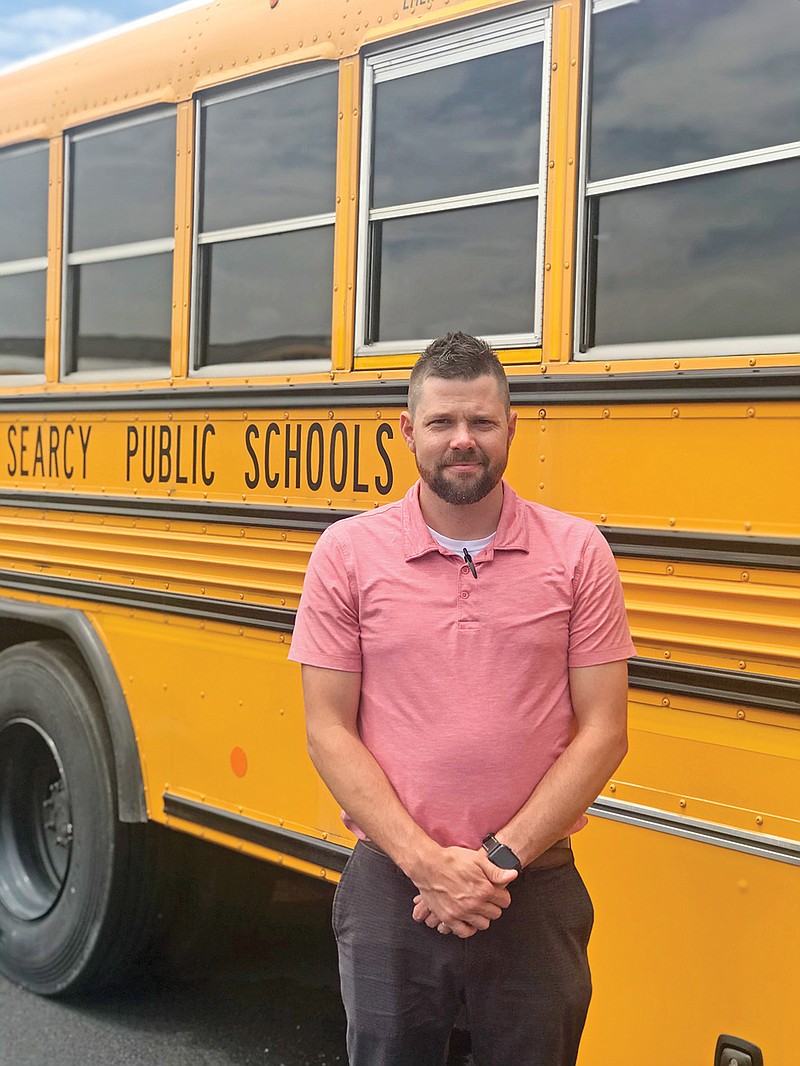 David Dale is the new transportation director for the Searcy School District. Dale said he decided to take the job because he wanted a better work-life balance for himself and his family.

David Dale feels like he missed the first three years of his daughter’s life, having to constantly be on the road for special assignments or having to work long hours at his job at the United Parcel Service, UPS. And after she had a hard time adjusting to the family’s most recent move from Batesville, Dale decided he wanted to find a job that was more consistent.

“When you get kids, you are looking for more of that work-life balance and aren’t chasing the corporate ladder,” he said. “My daughter is going into the third grade, and this is the first time she has been in the same school for two years in a row.

“I want them to go to school and graduate from the school. This last year, she really struggled with the move — so that’s what it really boils down to.”

Dale, who was recently hired as the new transportation director for the Searcy School District, began his job July 1.

“Even though David Dale had not previously worked in a public-school setting, several things impressed us about him and made us think he would be a good fit for transportation director,” Searcy Superintendent Diane Barrett said. “He had several years of experience in a transportation-related field, where he had extensive background in determining routes and had served in a supervisory role over a number of employees.

“David seemed ready and able to learn quickly the job tasks for which he would be responsible. Moreover, his personal demeanor of quiet confidence reassured us that he would be able to handle the sometimes stressful challenges of the job. We look forward to working with him in his new role.”

Dale and his wife, Autumn, moved from Batesville to Searcy in August of last year. He worked at UPS for 11 years and for FedEx for a year, and he said he was tired of moving. Dale said that for the first three years after his daughter was born, he worked 14 to 16 hours a day at the Little Rock UPS office. He said that when he took the job in Batesville, it was better, but the work-life balance was still difficult.

The couple’s daughter, Dakia, is 8, and they have a 4-year-old son, Doss, who will start kindergarten in fall 2021.

“Logistics is all I have ever known. … I felt like [the transportation-director job] had more stability, and I would be off when the kids are off,” Dale said. “And I have never really had a Christmas vacation, so that is going to be nice.”

Dale said he liked working in logistics because he liked the everyday challenge of it. He said even though it was long hours, it went by pretty quickly because he was constantly busy. He started working part time at UPS while he was in college, and “it just kind of built from there,” he said.

“I worked hard and excelled, and I got promoted after a year,” Dale said. “After I graduated, I was training drivers in west Little Rock and downtown Little Rock — all around that area.”

Lance King worked with Dale at UPS in Little Rock after King moved there in 2010. He said Dale is very personable, easygoing and even-keeled.

“I would say he is analytical and very detail-oriented,” King said. “I think he will do just fine at Searcy. I think he will be great. … I think the job responsibilities that he had at UPS will carry over and be very similar for the duties he has at this job.

“I think it translates well.”

Dale grew up in Izard County, having graduated from Melbourne High School in 2001. He pitched for the Central Baptist College baseball team in Conway, graduating in 2007, after attending school part time for the last year or two. He earned a bachelor’s degree in organizational management.

“I’ve got my 4-year-old really into baseball now, and he had his first year of T-ball this year,” Dale said. “I coached his T-ball team, and I will probably coach whatever as he moves up. I loved the idea of being a coach; I was just always stuck chasing the corporate ladder.

“Every day, Doss is wanting to practice something, and now I have the time to help him. It allows us to have an actual normal life, for sure.”

As the new transportation director, Dale said, his No. 1 priority is safety. He said that at UPS, every driver went through extensive safety training and learned how to be a professional defensive driver.

“The cargo here is much more precious, but everything I learned from those companies, I hope to implement with these drivers,” Dale said. “I’m also looking to see where I can save miles, minutes and seconds from all of our 27 routes.

“I’m learning the routes and the area and seeing what can change, but if it is not broke, I’m not going to try to fix it, but we do want to minimize the miles as much as possible.”

Dale said the biggest challenge right now is the uncertainty of what the school year might look like because of the COVID-19 pandemic. He said the district sent out surveys earlier this month, and based on that data, he and the district are looking at what the best course of action might be.

“I’m looking at the routes they have currently implemented, and I’m going out and getting familiar with the area, so when someone mentions a certain road, I know exactly where that is,” he said. “Definitely, the biggest challenge right now is the uncertainty.”