Fayetteville gets gruff with two goats 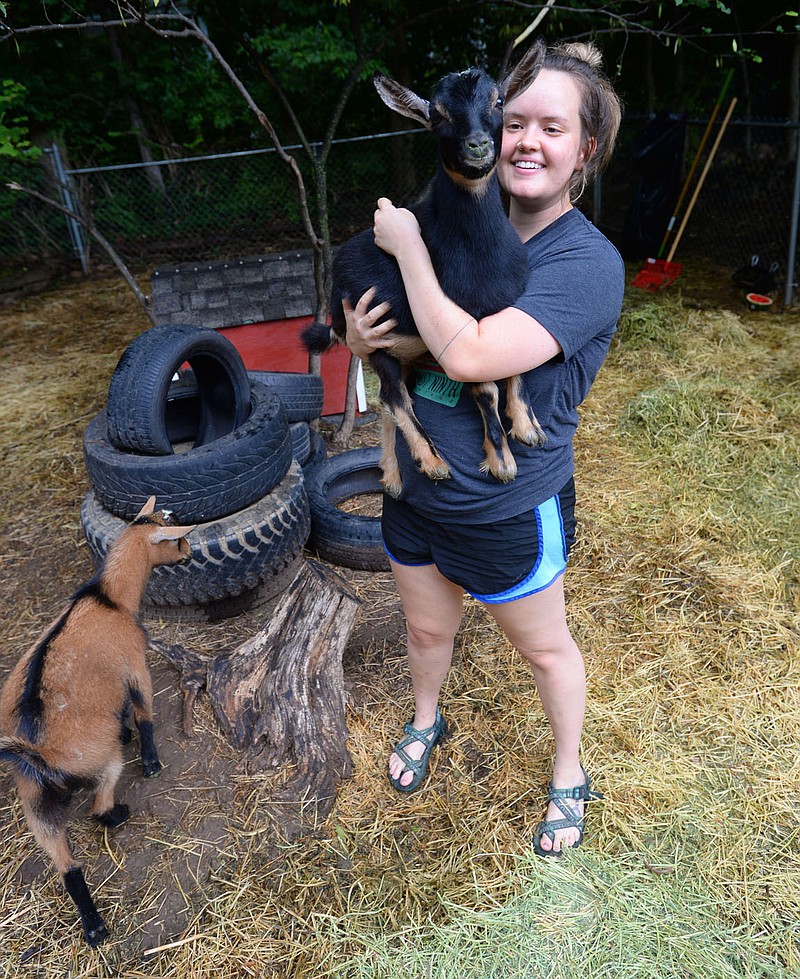 Abbey Allen holds her goats, Professor, (top) and Dilly Friday, July 31, 2020, at her home on Olive Avenue in Fayetteville. A newly proposed ordinance would allow for goats in the city limits on less land than previously required. Visit nwaonline.com/200803Daily/ for today's photo gallery. (NWA Democrat-Gazette/Andy Shupe)

FAYETTEVILLE -- Two goats living the dream in the Washington-Willow Historic District neighborhood are paving the way for their kin and the lots they live on.

Professor and Dilly, who both love watermelon but have a particular distaste for apples, are the two Nigerian goats belonging to Abbey and Morgan Montgomery that sparked a possible change in city law.

The newlyweds decided to get goats as quarantine began in April after being told they could not have inside animals by their landlord, Abbey Montgomery said. They never expected the decision might affect local government, she said.

Goat-gate began when someone in the community complained to the city.

A noise and odor complaint was submitted originally, said Garner Stoll, development services director. The only issue found at the Montgomerys' goat chateau was an issue with lot size as deemed by local ordinance.

City code says anyone who owns a goat must own at least two, and they have to be on a lot no less than 10,000 square feet. The proposed ordinance reduces that to 4,000 square feet, Stoll said.

Goats in violation of a zoning ordinance was a first, Stoll said. Two other complaints have been filed about goats, but there was no violation found with either, he said. The original ordinance allowing goats in the city was passed in 2014.

The couple spent a lot of time looking at local codes, watching YouTube videos and making sure they thought they could handle the goats, Montgomery said.

A mishap involving square footage of the lot listed on Zillow resulted in the space issue, Montgomery said.

"We were kind of bummed," Montgomery said about realizing the lot was around 700 feet too small.

The Montgomerys met with city planners to discuss the ordinance and what they needed to do to comply with the codes after learning about the issue.

Alli Quinlan, who lives in the neighborhood, first met the Montgomerys and their "kids" after hearing a couple nearby had goats.

Quinlan said she and her daughter are over there frequently to visit the animals and they would know if there was a smell or noise issue.

"She loves to go for walks to see the goats," Quinlan said. "She feeds them leaves and pets them. I get daily goat photos if I don't walk over there with them."

Quinlan, who used to serve on the city planning commission, offered to help the couple navigate the regulatory process and get them in touch with the right people, she said.

Montgomery posted on the Nextdoor app asking for those who love Professor and Dilly to show their support. She was surprised to see people she and husband didn't know join the effort, she said. Dilly is named after Tom Bombadil of the "Lord of the Rings" series.

"We have been completely overwhelmed by how much the community loves them and how much support they've gotten," Montgomery said. "They have regular visitors every day, multiple times a week."

Professor and Dilly have brought the Montgomerys closer with their neighbors and introduced the couple to more people in the community, she said.

Other goats are regulars in nearby neighborhoods. Goat yoga is not an unusual occurrence in Wilson Park, and goats have been used numerous times to eat invasive species in the park.

City council members will discuss the ordinance at Tuesday's meeting while the goats continue to munch on hay and the occasional watermelon. 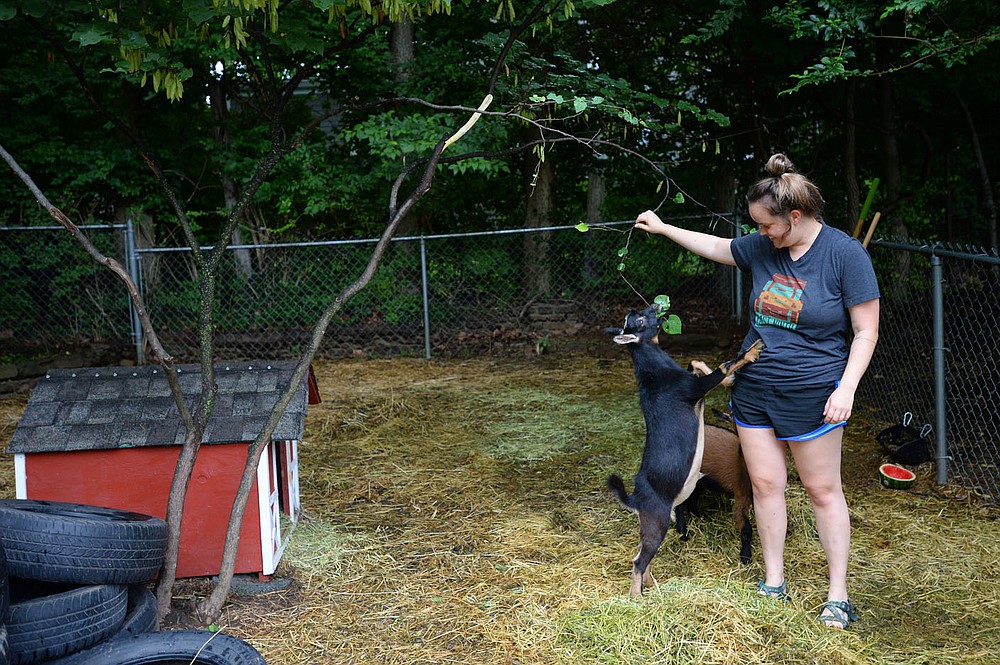 Abbey Allen plays with her goats, Professor (left), and Dilly, Friday, July 31, 2020, at her home on Olive Avenue in Fayetteville. A newly adopted ordinance allows for goats in the city limits on less land than earlier requirements. Visit nwaonline.com/200803Daily/ for today's photo gallery. (NWA Democrat-Gazette/Andy Shupe) 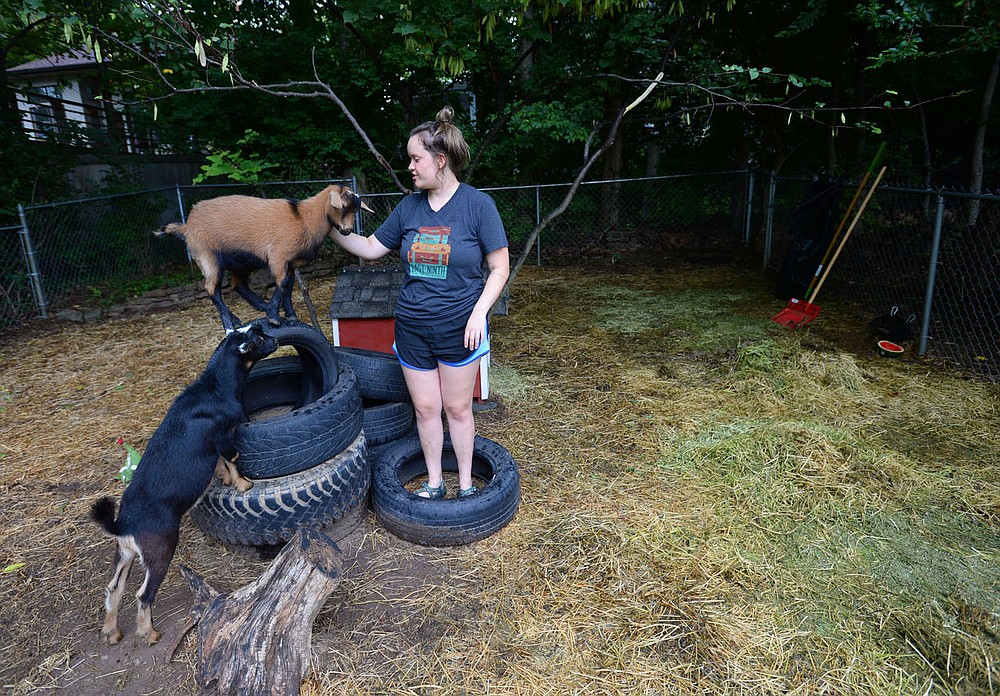 • Goat milk is consumed more than any other type of milk worldwide.

• They are a part of the genus capra.

• Goats are ruminants, meaning they are cud-chewing and hoofed.

Abbi Ross can be reached by email at aross@nwadg.com or on Twitter @AbbiRoss10.