Colleges in Arkansas firm up plans for covid-19; testing, tracing among concerns 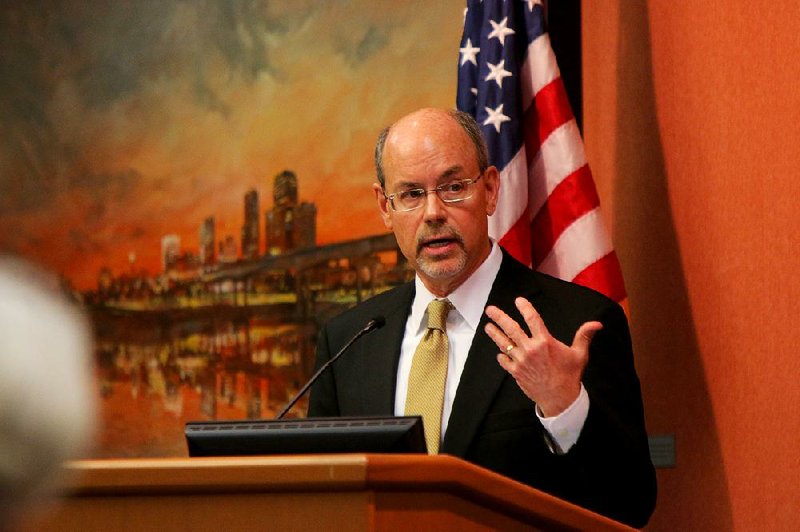 University of Arkansas System President Donald Bobbitt is shown in this file photo.

Plans for covid-19 testing and contact tracing are emerging at Arkansas' college campuses as students have begun moving in for the first on-campus coursework since March.

Most Arkansas colleges begin instruction the week of Aug. 17 or the week of Aug. 24, although some campuses have moved up their fall calendars to have the term end before the Thanksgiving break.

The beginning of the semester brings together thousands of people from across Arkansas, the nation and world, from covid-19 hot spots and places where the disease's spread has calmed. No one will be required to be tested for the coronavirus prior to going to campus -- unless they are athletes or fall within guidelines to be tested, based on symptoms or recent close contact with a person who has tested positive -- and only international students will be compelled to quarantine for 14 days prior to arriving on campus.

But universities in Arkansas said they were not requiring testing, which hasn't been recommended at the state or federal level.

Prompt testing and results remain a challenge at some facilities in Arkansas, the Arkansas Democrat-Gazette has previously reported.

On July 29, The New York Times reported 6,600 coronavirus cases said to be linked to college campuses across the nation. The Times surveyed every public four-year university, private institutions that compete in Division I sports, and elite research universities. Prior to the fall term and the student bodies at large returning to campus, the newspaper found seven cases at Arkansas State University; six cases at Arkansas Tech University; four each at Southern Arkansas University and the University of Arkansas at Pine Bluff; and one at the University of Arkansas, Fayetteville. Some major universities in other states reported hundreds of cases.

The University of Arkansas for Medical Sciences has $5 million in state funding to develop a contact tracing plan for 52 Arkansas colleges and universities, public and private. The tracing initiative had a "soft launch" last week, said Dr. Benjamin Amick, one of the leaders of the contact tracing effort.

UAMS, through its contract with the Arkansas Department of Health for tracing at the colleges, has 75 contact tracers to work in two centers, one in Central Arkansas and one in Northwest Arkansas. UAMS must report its work daily, weekly and monthly to the department.

Experts say contact tracing is one of the most crucial aspects of containing the coronavirus pandemic, although it only can be used in response to another crucial element: testing for the virus. So the success of the UAMS tracing effort will be affected, in part, by the success of fast and accurate testing.

"One can only hope it's a matter of testing, rather than 25,000 people attending a Razorback football game," Amick said. "We hope that everybody will avoid 'superspreader' situations. We're going to find out."

According to plans developed by the campuses, schools are largely relying on students to screen themselves and to get tested for the coronavirus when they suspect they need to be.

Under the UAMS contact tracing effort, which does not have a formally written plan, any positive test will be followed by a question of where the person attends school, and the school will be notified. From there, UAMS and, in some cases, the college will identify probable close contacts of the person, using class schedules, seating charts and other means, and will begin the tracing and notification process.

"Our guess is that texting will get people to be more responsive," Amick said.

UAMS has done contact tracing before, but not for students. It has found that people who test positive have, on average, five people who need to be contacted, usually household members.

Amick isn't sure how things might be different on a college campus.

Colleges are adjusting course delivery and living quarters to curb the spread of the virus, which thrives in clusters of people.

Hendrix College and Lyon College have opted to begin the fall semester remotely, deciding that the close quarters and shared air of their residential campuses were too great of a risk.

Thousands of classes at residential universities in Arkansas will be delivered remotely, but many others will involve on-campus instruction. Classes will be mostly in person at the University of Arkansas-Pulaski Technical College, where leaders have noted the challenge of teaching more hands-on courses, such as welding, remotely. They'll be mostly remote at the University of Arkansas at Pine Bluff, where leaders report that only 25% of classes will be in person and delivered in rooms that can only fill to one-third of capacity.

Universities have come up with creative ways to encourage distancing. At Henderson State University, students will be able to order from the dining hall using an app.

Arkansas State University will try to isolate students when possible in suites with private bathrooms to prevent the spread of disease. Bathroom cleaning and limitations have been features of some campuses' plans, seen as locations with significant potential for viral spread.

Arkansas' public universities have set aside varying numbers of dormitory rooms for isolating residential students either infected with covid-19 or awaiting test results.

Last month, University of Arkansas System President Donald Bobbitt told the Arkansas Legislative Council Higher Education Subcommittee that he didn't think the $5 million allocated for UAMS was enough, based on the rise in active covid-19 cases in Arkansas in recent weeks.

​​​​​Bobbitt said less was known in June, at the time officials proposed their contact tracing and testing needs, and experts made their "best guesses" as to what colleges would need to reopen. Since then, virus cases have "exploded," he said.

"These equations expand exponentially with the number of positives," Bobbitt said. So the estimates in June are "probably woefully inadequate based on the present time."

"So I would hope that perhaps ADH and perhaps the Division of Higher Education may need to go back to the task force and seek additional funds," he said.

If test results take up to 13 days, as they do in some places, Bobbitt said, higher education leaders wanting to contact-trace "might as well just get the phone book at that point in time for the campus."

Gov. Asa Hutchinson hasn't received requests for additional funding for UAMS' tracing efforts, he said in a statement to the newspaper.

"If the need is there, then of course that need will be considered and balanced with other requests," the statement reads.

The University of Central Arkansas, which has employed seven contract tracers and plans to hire more, has reached an agreement with Conway Regional Health Systems, Hendrix College and Central Baptist College for tracing coordination. The New York Institute of Technology College of Osteopathic Medicine at the Arkansas State University campus in Jonesboro will help conduct contact tracing at ASU System campuses and Henderson State University, which plans to merge into the system by Jan. 1.

The University of Arkansas at Little Rock is exploring other resources for contact tracing and testing.

"When the request was made to the governor's task force, we were aware that the amount would not cover all of the university's contact tracing and testing needs," spokeswoman Angela Faller wrote in an email to the newspaper. "We appreciate the assistance the State of Arkansas provided to help the colleges and universities, and we are making plans to use other resources to take care of the additional costs."

Print Headline: Colleges in Arkansas firm up plans for covid-19