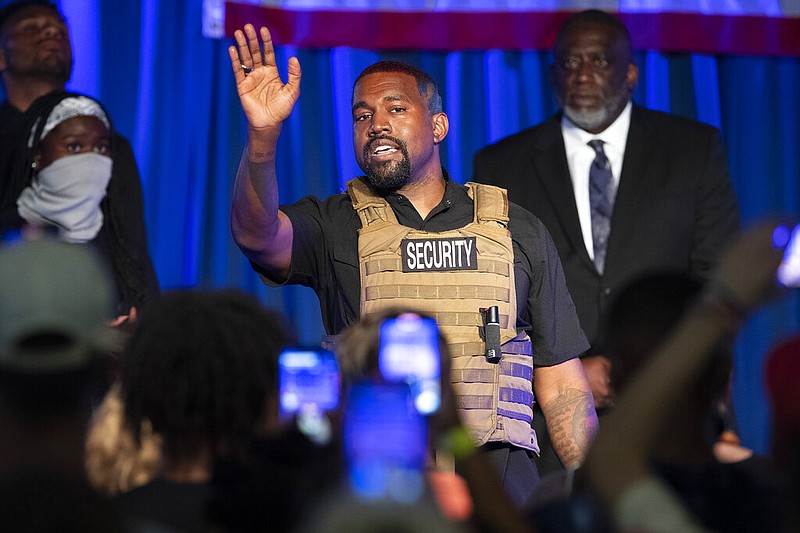 Rapper Kanye West of Cody, Wyo., will be on Arkansas' Nov. 3 general election ballot as one of the independent candidates for president, Secretary of State John Thurston said Tuesday.

Thurston said in a letter dated Tuesday to Gregg Keller of St. Louis that the secretary of state's office reviewed the petition to have West placed on the ballot, with Michele Tidball, also of Cody, as a candidate for vice president. The office verified that they qualified because they submitted a sufficient number of valid signatures, the letter said.

To qualify for the ballot under Arkansas law, independent candidates for president and vice president are required to file a petition with 1,000 valid signatures from qualified registered voters, according to Thurston spokesman Chris Powell.

"We will certify their names to the respective Election Commission (s) on or before Aug. 20, 2020," Thurston wrote in his letter. "Ballot draw to determine the order of names being placed on the ballot takes place in every county no later than August 24, 2020, in a public meeting."

Keller is a former executive director of the American Conservative Union, the Conservative Political Action Conference and the Faith & Freedom Coalition.

West has qualified for the ballot in states such as Oklahoma and Colorado, while his effort to get on the ballot is being challenged in Wisconsin, according to The Associated Press.

West isn't the only independent candidate for president in Arkansas.

Thurston said in a letter dated Monday to Claude Lee of Gilbert, Ariz., that Roque "Rocky" De La Fuente of San Diego and Darcy G. Richardson will be on the ballot as candidates for president and vice president.