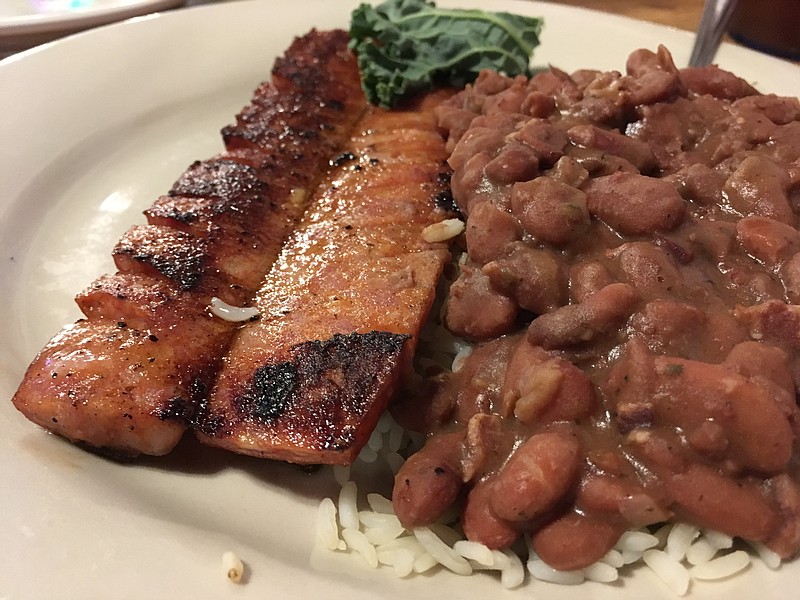 Red Beans and Rice with Andouille Sausage was a little more presentable on a plate in the Faded Rose dining room in 2018. (Arkansas Democrat-Gazette/Eric E. Harrison)

The time has come, the Walrus said, to eat of many things. Not shoes, not ships, not sealing wax — cabbages, perhaps, but not kings. (That, as Johnny Depp observed in the movie "Charlie and the Chocolate Factory," would be cannibalism, which is frowned upon in most civilized societies.)

We did not indulge in either cabbages or cannibalism in this round of to-go adventures, but we did sample a variety of cuisines, including Asian, Southern and Italian. As has been our practice, we've stuck mostly to a radius convenient to getting food quickly and still-heatedly home, we have avoided chains and we have paid for all our meals up front. 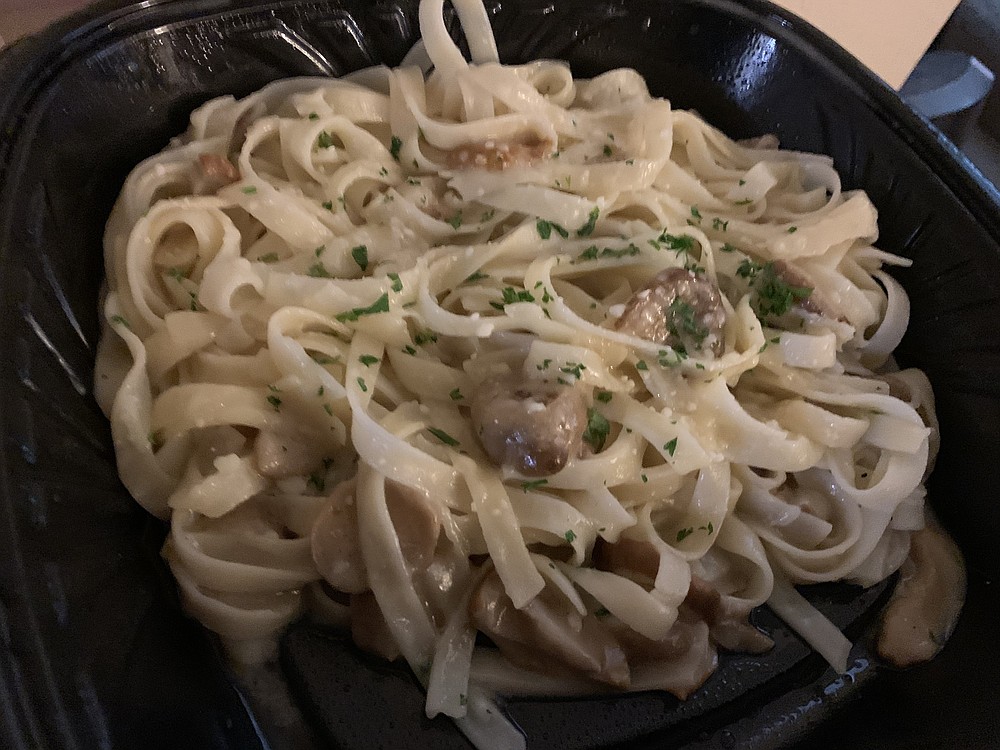 WHAT WE GOT: Mozzarella Caprese ($10); Tagliatelle With Porcini ($15). Tagliatelle, for those not familiar with the noodle, is similar to fettucine; the latter, we're told, presumably just a little bit thicker than the former, which you'll most likely find in the northern Italian regions of Emilia-Romagna and Marche. But enough of the geography lesson. The nearly al dente pasta comes tossed with plenty of sliced porcini mushrooms and black truffle oil in a light wine-and-butter sauce, and it's delicious and not too heavy. The excellent caprese features fresh mozzarella, made daily on the premises, with fresh tomatoes, basil and olive oil combined into a sort of quasi-bruschetta. The meal also came with four thick slices of slightly chewy foccacia bread and a big industrial-size hunk of butter.

HOW IT WENT: Capeo, one of the gems in the area culinary tiara, only recently reopened for Phase 2 limited-capacity dine-in and to-go orders. We placed our order at the bar; it took about 15 minutes for it to come out of the kitchen.

HOW IT'S GOING: Just a couple of nights after they reopened, the kitchen and wait staff were scurrying to take care of well-distanced in-house customers. There were no other to-go orders, however. Front-of-house staff was well masked and gloved; the kitchen staff, not so much. 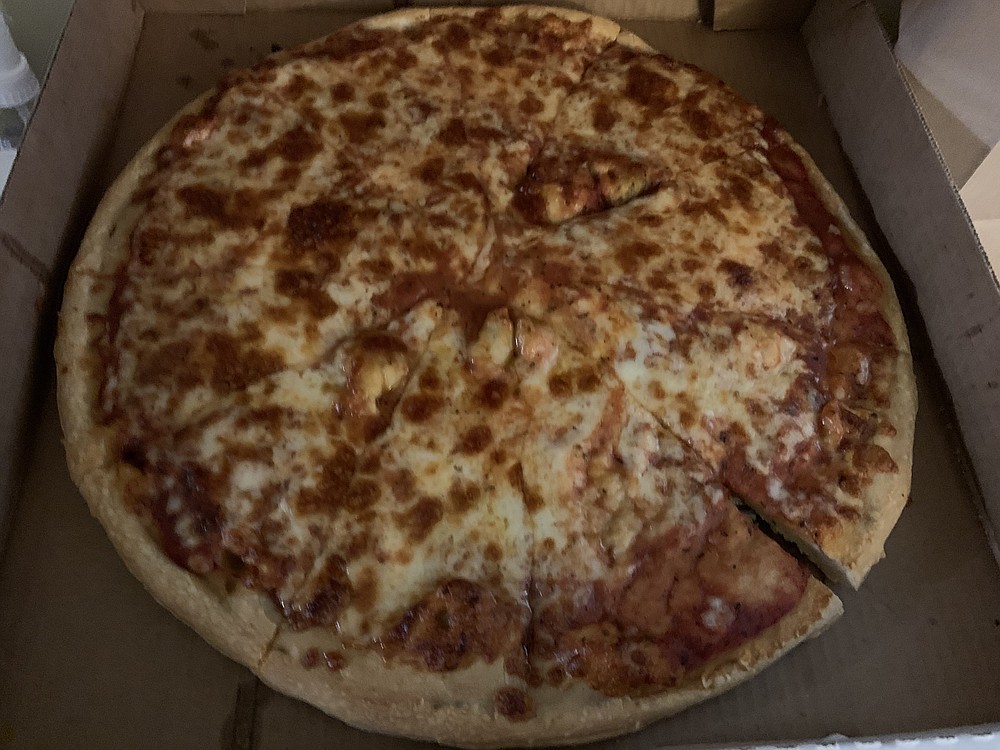 You can get a large cheese pizza at medium price on Monday's from Grady’s on Little Rock's Rodney Parham Road. (Arkansas Democrat-Gazette/Eric E. Harrison)

WHAT WE GOT: 16-inch cheese pizza (regularly $12.90, but we paid $10.90 because you get a large for a medium price on Mondays). One tends to forget the actual size of a 16-inch diameter pie. We got a thick layer of mozzarella — extra cheese would have been redundant — over a modest layer of red sauce on a slightly chewy crust; Grady's also does a St. Louis blend of multiple cheeses.

HOW IT WENT: We placed our order over the phone; the front door of the restaurant was locked and it was necessary to go through the drive-thru (something we wish the nice person who took our order had explained to us up front), where we paid for and collected our pie. No problems. However, the lane is somewhat narrow and it's a bit of a challenge to take the hard left turn behind the restaurant to exit it.

HOW IT'S GOING: There was one customer ahead of us in line and three behind us early on a Monday evening. 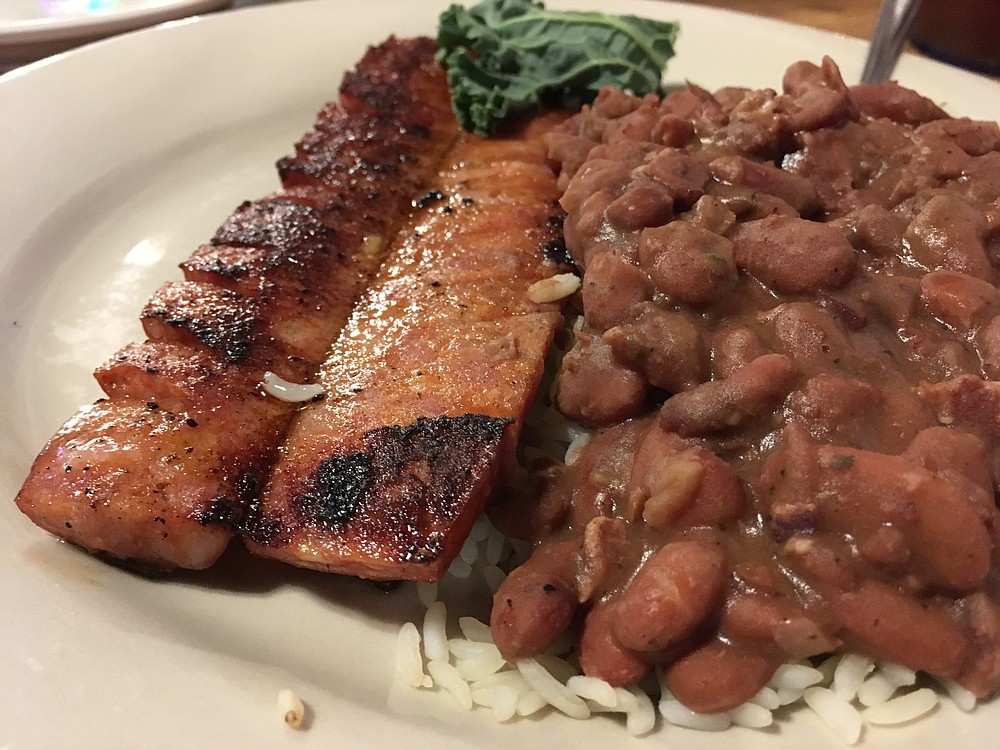 Red Beans and Rice with Andouille Sausage was a little more presentable on a plate in the Faded Rose dining room in 2018. (Arkansas Democrat-Gazette/Eric E. Harrison)

WHAT WE GOT: Red beans and rice with andouille sausage ($10.75). We had forgotten since the last time we ordered this that the sausage comes separately, but it was delicious and nicely spicy, and the Faded Rose does red beans and rice as well as or better than just about anybody around here. It comes with a small soaked salad — chopped a little less finely and with more iceberg lettuce than we remember from the last time we ate there — and a small loaf of the airy, light white house bread.

HOW IT WENT: We placed our order by phone; it was ready in the 20 minutes allotted, and we picked it up and paid for it at the bar. Front-of-house staff behind the bar was masked and gloved.

HOW IT'S GOING: Faded Rose recently expanded its service to include dining on-site on the front patio, which has been full most nights. There were at least four other to-go orders awaiting pickup when we got ours. 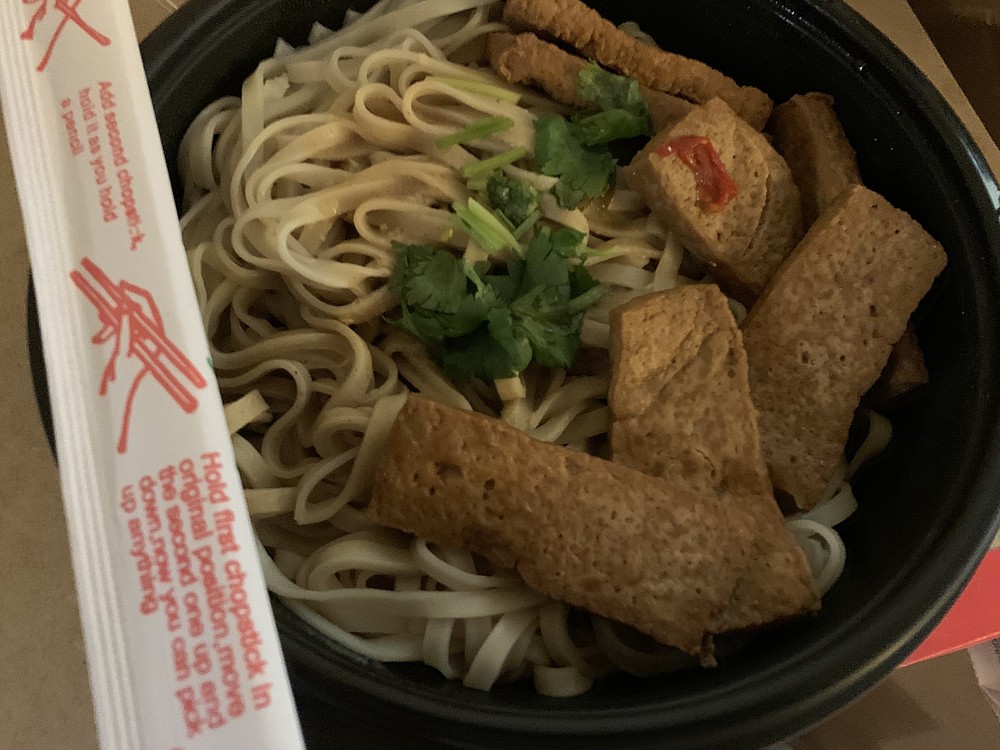 WHAT WE GOT: Noodles with tofu ($7.29), sesame balls ($2.49). We've discovered over the years that Three Fold noodles, which they make fresh on the premises, and which are delightfully al dente, are best with tofu instead of with pork or chicken, and we prefer not to garnish with the pickled radish that they would otherwise automatically add. You can get it at various levels of spiciness — they provide the sauce and you pour it on — but unlike Three Fold's dumplings, which we usually get with medium heat, we actually prefer the noodles without any. Their sesame balls are a must-order dessert item for us, a half-dozen-plus orbs of lightly toasted dough crusted with sesame seeds and filled with a semi-sweet purplish bean paste.

HOW IT WENT: We placed our order and paid for it online. Relatively easy.

HOW IT'S GOING: Three Fold has stayed busy through the pandemic, at first with only to-go orders and now with limited-capacity dine-in service; it also operates a Riverdale food truck on which we reported a few weeks ago. 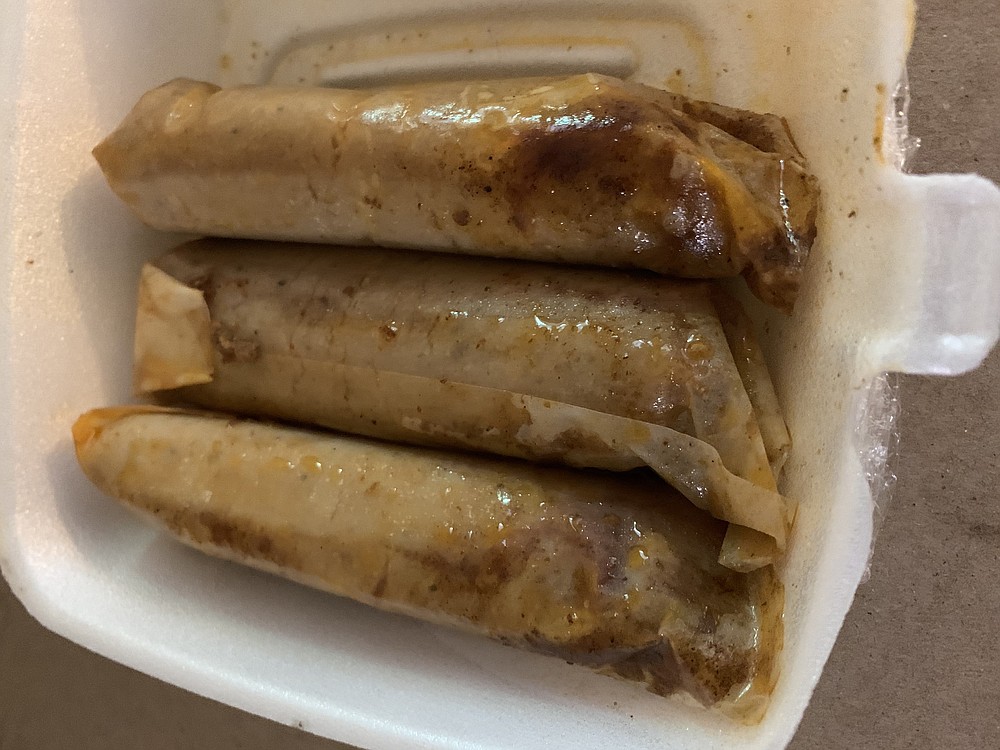 WHAT WE GOT: Three tamales with chili ($6.25). Doe's offers its "World Famous Hot Tamales" only at lunch, and we definitely appreciated having the chili, which, though somewhat watery and with beans, was very helpful because the paper-wrapped tamales, no matter how famous, weren't especially exciting without it. The chili came in a foam bowl double-wrapped in plastic to make sure none of it spilled en route. We crumbled up the many crackers that also came with the order into the remaining chili and made a pretty good meal, all things together. (Other tamale options: with chili and salad, $8.95; with chili and french fries, $8.50.)

HOW IT WENT: We ordered over the phone and paid when we picked the order up. The front-of-house staff was fully masked and gloved.

HOW IT'S GOING: Doe's has opened its dining room, and there were a lot of lunchtime customers. Staff was not actively enforcing the "must have a mask to enter" policy. 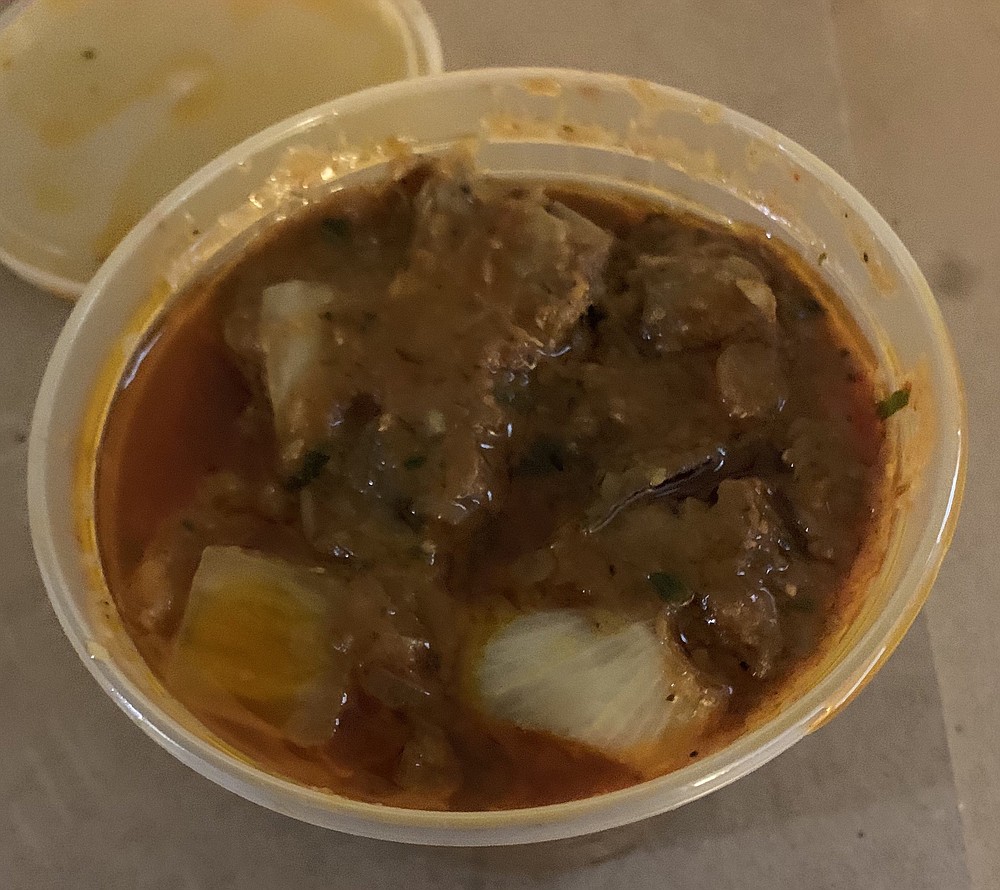 There's more Karahi Lamb than seemed to meet the eye in the round plastic to-go container from Taj Mahal. (Arkansas Democrat-Gazette/Eric E. Harrison)

WHAT WE GOT: Karahi Lamb ($15.95); garlic naan ($2.95). The dish involves large rectangular-cut chunks of boneless lamb sauteed in a warm red-brown sauce with onions, peppers and tomatoes; we asked for medium heat, which at Taj Mahal is something milder than tongue-tingling. The lamb was a little chewy — only afterward, re-checking the online menu, did we note that the menu descriptions of Lamb Korma and Saag Lamb dishes mention "tender boneless lamb" and this doesn't — but the dish was delicious and there turned out to be a lot more of it in the round plastic to-go container than we had thought at first, somewhat disappointed, glance. The naan, a not-quite-pita-like flatbread, was less garlicky than we expected but also less chewy than we expected — it came wrapped in aluminum foil, which had kept it sufficiently fresh for the trip home.

HOW IT WENT: We tried to order online but the system defeated us, so we placed our order by phone and paid for it when we got there; Taj Mahal has built a to-go window onto its Market Street side that facilitated our transaction with minimal handling and fuss.

HOW IT'S GOING: There was quite a line of cars at the to-go window the weekend evening we visited; that the dining room has recently opened may cut into the number of pickup customers.