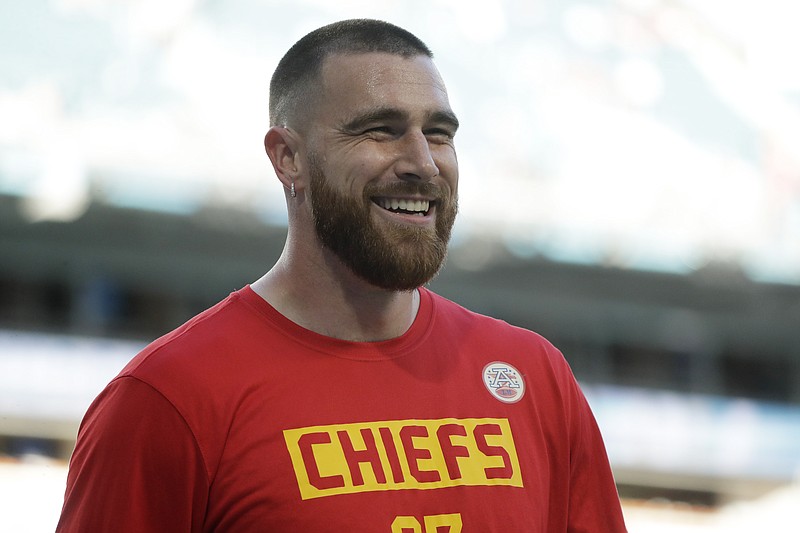 FILE - Kansas City Chiefs' Travis Kelce smiles before the NFL Super Bowl 54 football game between the San Francisco 49ers and Kansas City Chiefs Sunday, Feb. 2, 2020, in Miami Gardens, Fla. The Chiefs and the star tight end have agreed to a four-year, $57.25 million contract extension that will keep him with the Super Bowl champions through 2025, a person familiar with the contract tells The Associated Press. The person spoke on condition of anonymity Thursday because the deal has not been announced. (AP Photo/Wilfredo Lee)

The Kansas City Chiefs weren't done when they signed star quarterback Patrick Mahomes to a record-setting extension, or when they put together a pricey package to keep Pro Bowl defensive tackle Chris Jones on the line. Now, they're shelling out more big money to keep tight end Travis Kelce in the fold. The Chiefs and the two-time All-Pro agreed to a four-year, $57.25 million extension Thursday that will keep him with the Super Bowl champions through 2025, a person familiar with the contract told The Associated Press. The deal came the same day the San Francisco 49ers and their All-Pro tight end, George Kittle, agreed to a five-year, $75 million extension, a person familiar with that contract told AP.

The Buffalo Bills are protecting quarterback Josh Allen's blindside for the long term after signing left tackle Dion Dawkins to a four-year, $60 million contract extension. Dawkins has been a starter in Buffalo since being selected in the second round of the 2017 draft out of Temple. He had one year left on his rookie contract, and is now signed through the 2024 season. At 6-5 and 320 pounds, the 26-year-old Dawkins has 43 career starts, all at left tackle.

Steve Stricker birdied the final hole for a 2-under 68 and a share of the lead Thursday in Akron, Ohio, in the Bridgestone Senior Players Championship, the PGA Tour Champions' first major of the season. "Didn't hit it all that good, though. I scraped it around, got it up-and-down a lot," Stricker said. "But a good score certainly." Jerry Kelly, Miguel Angel Jimenez, Wes Short Jr. and Rod Pampling joined Stricker atop the leaderboard on Firestone Country Club's South Course, the longtime site of a PGA Tour event and later a World Golf Championship tournament. John Daly (Dardanelle, University of Arkansas) fired a 2-over 72 and is tied for 21st place. Ken Duke (Arkadelphia, Henderson State) is at 4-over 74, and Glen Day (Little Rock) is at 6-over 76.

Nicole Broch Larsen made six birdies in total for a 65 that put her a stroke clear of five players in the first round of the Ladies Scottish Open Danielle Kang started her bid for a third consecutive win on the LPGA Tour with an even-par 71 on Thursday, leaving the American four shots off the clubhouse lead. The American golfer bounced back from bogeys on Nos. 3 and 4 by making birdie at the par-5 10th at the Renaissance Club in North Berwick, Scotland. Kang has made a fast start to the LPGA Tour's resumption after the coronavirus pandemic, winning back-to-back titles at the Drive On Championship and the Marathon Classic over the past two weeks to climb to No. 2 in the world rankings. Stacy Lewis (Razorbacks) was one of 27 players in the 144-player field who did not complete the first round.

Gainey on top in Boise

Tommy Gainey fired a 9 under at the Hillcrest Country Club and leads the Albertsons Boise (Idaho) Open by one stroke after the first round of the Korn Ferry Tour tournament over Charlie Saxon. Former University of Arkansas golfers Tag Ridings, Matt Atkins and Nicolas Echavarria are tied for 56th place after rounds of 2 under.

St. Louis' series opener against the Chicago White Sox has been postponed to Saturday, giving the Cardinals an extra day to recover from a coronavirus outbreak. The Cardinals, who haven't played since July 29, were set to resume their season tonight in Chicago. But the series opener was pushed back to a doubleheader on Saturday, the beginning of an extended stay in the Windy City for the Cards. John Mozeliak, the president of baseball operations for the Cardinals, confirmed the move in a conference call with reporters. Mozeliak also said the team is going to play doubleheaders on Monday and Wednesday against the Cubs at Wrigley Field after the NL Central rivals had a series postponed last weekend. The Cardinals' season has been derailed by the virus. Star catcher Yadier Molina and infielder Paul DeJong are among the players who have tested positive.

Novak Djokovic announced Thursday he will enter the U.S. Open and the hard-court tuneup preceding it in New York. Djokovic initially complained about the U.S. Tennis Association's plans to try to protect people from the coronavirus pandemic with such measures as limiting the size of players' entourages, going so far as to say he didn't know whether he would participate. "It was not an easy decision to make with all the obstacles and challenges on many sides," said the No. 1-ranked Djokovic, who tested positive for covid-19 in June, "but the prospect of competing again makes me really excited." The U.S. Open is scheduled to begin Aug. 31, without spectators. Before that, the Western & Southern Open -- normally held in Cincinnati -- will be played at the Billie Jean King National Tennis Center in Flushing Meadows, starting Aug 22. Djokovic has won three of his 17 Grand Slam titles at the U.S. Open and was the runner-up there five times.