OPINION | FLASHBACK: 'The Americanization of Emily" 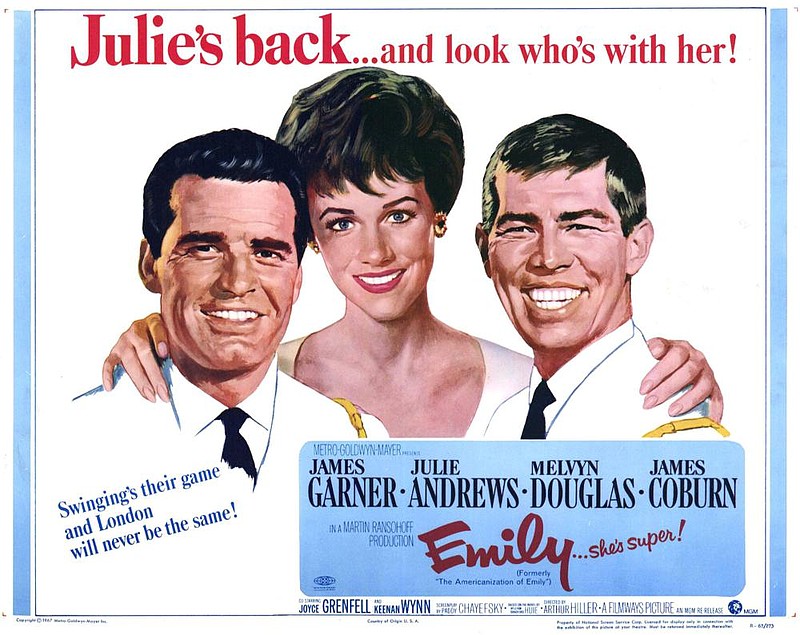 The Americanization of Emily

Recently, I saw an interview with Julie Andrews where she talked about her career. She named "The Americanization of Emily" as her favorite of all the films she has made.

And I think it is her best film. I saw this film as an 11-year-old and even then I knew it was something special. Andrews made it right after "Mary Poppins" because she didn't want to be typecast as Miss Goody-Goody. The film was quite different from the Disney film. It's a comedy-drama with sex, in black and white, with nary a song or dancing penguin to be found. (The director, Arthur Hiller, used actual footage of the invasion of Normandy, thus necessitating the need for black and white photography.) And the lovely title tune -- "Emily" -- by Johnny Mercer and Johnny Mandel, is only played in the background as an instrumental during more romantic scenes.

Andrews plays Emily Barham, a war widow who drives for the military motor pool in WWII London. When she first meets Charlie Madison (James Garner), he slaps her on her backside and she promptly turns around and slaps him silly. The two eventually embark on a steamy (for the time) affair.

Garner (who would re-team with Andrews for "Victor/Victoria" in 1982) plays a "dog robber" to his admiral, played by the marvelous Melvyn Douglas. A "dog robber" is a man who supplies his admiral or general with all the food, alcohol and love he requires. Also in the cast are James Coburn, Keenan Wynn, William Windom and Joyce Grenfell, who plays Emily's "dotty" mother.

"Emily" has something important to say about war and the way it is glorified by some in our culture, courtesy of Paddy Chayefsky, who has written some of the best American films and television shows -- "Network," "The Hospital," "The Goddess," "Marty" and "The Bachelor Party." His dialogue is bristling with caustic observations of war, rare for a film of that era. He enters Joe Mankiewicz territory.

Charlie tells Emily and her mother that he is "a practicing coward" and doesn't want to die for his country. He says there is no virtue in valor as it glorifies war. This makes him prime husband material as she has lost a husband, a father and a brother in the war. And that Charlie will never get killed in the fighting. The two start an affair with plans to wed.

Admiral Jessup (Douglas) is having what we used to call a nervous breakdown. And he comes up with the far-fetched idea that the first man to die on Omaha Beach must be a sailor. And he wants Charlie to film the action as they storm the beaches of Normandy on June 5, 1944.

Charlie tells Emily of his plan to miss the invasion, and she balks. They start to argue. "Let's not say things we'll regret," she tells Charlie. "No, let's say things we'll regret," Charlie tells her as their anger toward each other builds. More harsh words are exchanged. They break up in the rain, she slaps him, and as he walks away eating a Hershey bar, he says, "You're a b." That was the first time I ever heard that word in a movie.

Charlie does everything he can to stop the admiral's plan, which he says is senseless and dangerous. His orders are tied up with as much red tape as needed and he misses the invasion. But things don't go the way Charlie planned, as "the moon didn't come out."

The thousands of soldiers, sailors and Marines who were to invade France are sent back across the English Channel until the next day, which is June 6, what we now refer to as D-Day. One of the funniest scenes is Charlie running around a naval base in his underwear yelling "the moon didn't come out?!"

Charlie does eventually land in France on D-Day and might possibly become the first dead man on Omaha Beach. If you haven't seen the film I'll not spoil the ending here. Needless to say, it's a knockout.

Throughout the rest of the '60s, Andrews was indeed typecast after "Emily," once "The Sound of Music" was released. Aside from Hitchcock's "Torn Curtain" and the epic saga of "Hawaii," she was always the sweet young thing who solves the world's problems with her singing. (She did have a four-octave range.) But with this film, she proved she could do so much more than sing.

My only complaint of "Emily" is the women's hairstyles are circa 1964. A lot of film from the '60s suffered that same fate.

Available for streaming on Watch TCM; for rental or purchase via other digital platforms including Amazon Prime.