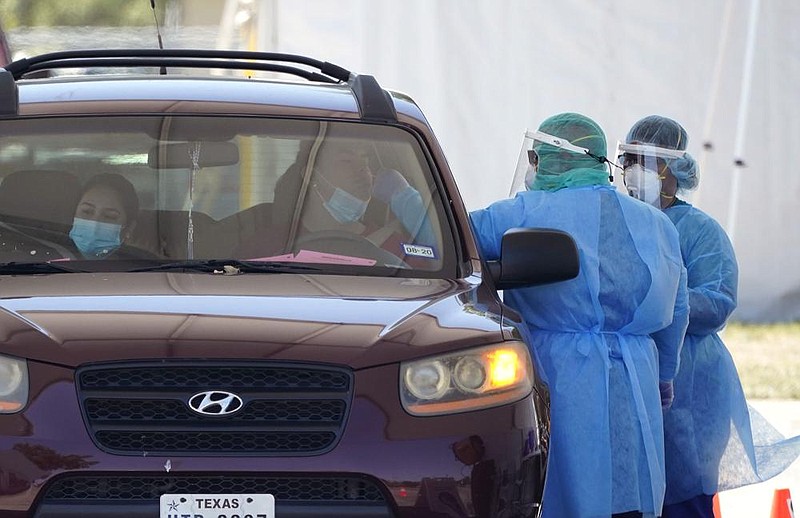 For months, experts have said that expanding the number of coronavirus tests in the United States to several million a day is essential to reining in the pandemic, but the country remains far short of that benchmark and, for the first time, the number of known tests conducted each day has fallen.

Reported daily tests trended downward for much of the past two weeks. Some 733,000 people have been tested each day this month on average, down from nearly 750,000 in July, according to the COVID Tracking Project. The seven-day test average dropped to 709,000 on Monday, the lowest in nearly a month, before ticking upward again at week's end.

The trend comes after months of steady increases in testing, and it may in part reflect that fewer people are seeking out tests as known cases have leveled off at more than 50,000 per day after surging even higher earlier this summer.

The U.S. has surpassed 5 million confirmed coronavirus cases and is closing in on 170,000 deaths.

But the plateau in testing may also reflect people's frustration at the prospect of long lines and delays in getting results -- as well as another problem: There is no system to test vast portions of the population, not just those seeking tests.

Months into the pandemic, testing remains a major obstacle in America's efforts to stop the coronavirus. Some of the supply shortages that caused problems earlier have eased, but even after improvements, test results in some cases are still not being returned within a day or two, hindering efforts to quickly isolate patients and trace their contacts.

Now, the number of tests being given has slowed just as the nation braces for the possibility of another surge when schools reopen and cooler weather drives people indoors.

"We're clearly not doing enough," said Dr. Mark McClellan, the director of the Duke-Margolis Center for Health Policy and the commissioner of the Food and Drug Administration under former President George W. Bush.

The downward trend may turn out to be only a short-term setback: The nation reported more than 800,000 tests on Thursday and Friday. There are also limitations to the data, which is largely drawn from state health departments, some of which have recently struggled with backlogs and other issues. It may not include tests done in labs not certified by the federal government.

But according to the figures available, tests were declining in 20 states last week, and data collected by the Department of Health and Human Services showed a similar overall trend nationally.

Without a vaccine or a highly successful treatment, widespread testing is seen as a cornerstone for fighting a pandemic in which as many as 40% of infected people do not show symptoms and may unknowingly spread the virus.

Adm. Brett Giroir, the assistant secretary for health and the Trump administration's virus testing czar, said that conducting millions of tests per day was not realistic. The administration has asked states to test at least 2% of their populations each month, or the equivalent of about 220,000 people per day nationally, which Giroir said would be enough to identify rising hot spots.

"We are doing the appropriate amount of testing now to reduce the spread, flatten the curve, save lives," he told reporters on Thursday.

He said the government was already testing large numbers of asymptomatic people, and he described an effort to strategically deploy tests, including to those who are hospitalized and in nursing homes. "You do not beat the virus by shotgun testing everyone all the time," Giroir said, adding: "Don't get hung up on a number."

Giroir also cited a decline in known cases in states like Florida as an indication that testing is sufficient. But experts say the rate of people testing positive in places like Florida remains high, suggesting too little testing.

For much of the spring and summer, the number of daily tests steadily increased. The United States averaged about 172,000 tests per day in April, before ramping up to an average of 510,000 in June and nearly 750,000 in July.

The recent dip in testing is likely a result of several factors, epidemiologists said.

It may, in part, reflect an improved outlook from earlier this summer, when parts of the Sunbelt were seeing alarming outbreaks. The number of people hospitalized with the virus each day across the country has decreased to around 45,000, down from earlier peaks of around 59,000 in April and July. And the percentage of people testing positive overall is hovering at about 7%, down from 8.5% in July.

"It's an indication to me there are not as many people getting sick," said Nelson Wolff, the county judge in Bexar County, Texas, the home of San Antonio, where a site that provides free tests for people reporting symptoms had seen a decline in demand.

But experts fear that the slowing of tests may also reveal a sense of "pandemic fatigue" -- people who want or need to be tested may choose not to, discouraged by stories of others waiting hours in line and waiting as long as two weeks for a result.

The country has so far relied heavily on laboratory tests, which are accurate but can take hours or days for results and are best suited for people who believe they may have been exposed to the virus.

To expand testing to a level that could keep the virus in check, experts say, the United States will need to scale up other types of testing, like antigen tests, which are less accurate but can provide results in as little as 15 minutes, and other new technologies, like tests that could be done at home.

Such an approach would reduce the strain on laboratories, reserving those tests for people who need them most, while allowing the country to simultaneously screen large numbers of asymptomatic people at schools, nursing homes, offices and neighborhoods.

The country is still waiting on a larger market of tests.

The Food and Drug Administration has approved just two companies to sell antigen tests. One of the companies, Quidel Corp., says it is making 1 million tests per week. The other, Becton, Dickinson & Co., said it is ramping up its efforts, with the aim of manufacturing 10 million tests by the end of September.

Other tests are still entering the market. For example, a saliva test developed by Yale, which has been tested on NBA players and staff members, won emergency approval Saturday from the FDA.

"We are at an inflection point," said Dr. Jonathan Quick, who is managing the pandemic response at the Rockefeller Foundation, which has said the nation needs to carry out about 4 million tests a day by the fall. "That is a paradigm shift."

The situation has been particularly acute in Texas, where the number of reported daily tests fell to as low as 35,000, down from a high of 67,000 in late July. The drop came as the state's percentage of positive tests rose to as high as 24% last week.

Gov. Greg Abbott said the state deployed a team to investigate why the positivity rate had risen so sharply. He said Thursday that the state had more testing capacity than was being used and that he was sending thousands more tests to Houston.

In Travis County, which includes Austin, the health authority, Dr. Mark Escott, told local officials of a drop in demand. "This is not because tests are not available," he said. "It is because less individuals are signing up."

The trend worries health experts who fear that Texas risks flying blind into the fall if it doesn't increase testing.

In recent weeks, things have improved, including a nearly 40% drop in hospitalizations since July's peak.

But deaths remain high, with Texas averaging more than 210 reported new deaths a day over the past two weeks, according to the COVID Tracking Project. On Saturday, it reported 238 deaths. Overall, the state has recorded more than 9,800 fatalities.

Some students are already back in classrooms. And in the football-obsessed state, which has by far the most high school football players in the nation at about 170,000, practices are underway.

"At this point, everybody's a guinea pig," said Jessica Light, a professor at Texas A&M University who ultimately decided to send her 8-year-old daughter and 5-year-old son back to classrooms when school opens Tuesday. "The teachers, the staff, the students, the parents. Because we're not exactly sure how this is going to work."

Other states in the South clobbered by the virus this summer are also seeing improvements, including Alabama. Intensive care units remain full there, but the average of new confirmed cases each day has dropped below 1,000, from 1,800 in mid-July.

President Donald Trump's top coronavirus adviser used a visit to Kansas to urge people to wear masks regardless of where they live.

"What's really important for every Kansan to understand is that this epidemic that we have been seeing this summer is both urban and rural," Dr. Deborah Birx, coordinator of the White House coronavirus task force, said Saturday. "So we are really asking all communities, whether you are urban or rural communities, to really wear a mask inside, outside, every day."

While in Kansas City, Kan., for a meeting with Gov. Laura Kelly, as well as community and state health officials at the University of Kansas Medical Center, Birx also stressed that people should socially distance and not have gatherings, The Kansas City Star reported.

"You can't tell who's infected," Birx said. "Much of the spread is asymptomatic. I know we all want to believe that our family members cannot be positive. They are."

"We have been doing that across the South, and we've seen a dramatic decrease in cases where the population has followed those guidelines," she said.

Separately, New York's annual light display honoring victims of 9/11 is back on, officials announced Saturday. They said health officials will supervise this year's tribute to ensure workers' safety amid concerns related to the coronavirus pandemic.

Gov. Andrew Cuomo said in a statement that it is especially important this year to commemorate the lives lost and heroism displayed in the Sept. 11, 2001, attacks "as New Yorkers are once again called upon to face a common enemy."

The announcement came days after the National September 11 Memorial & Museum canceled the Tribute in Light over concerns that the coronavirus might spread among crews creating twin columns of light to represent the World Trade Center in the Manhattan sky.

Elsewhere, South Korean health authorities on Saturday reported new coronavirus cases in the triple digits for the second day in a row, as the country continues to see an uptick in local infections. The rise prompted the government to impose new restrictions.

Of the 166 new cases recorded, 155 were locally transmitted, according to data from the Korea Centers for Disease Control and Prevention. The total number of infections now stands at 15,039.

Saturday morning's figure was already up from 138 reported late Friday, the highest local increase in a day since March 11, when the country reported 242 new infections, according to the Yonhap news agency.

Yonhap reported that the Korea Centers for Disease Control and Prevention had warned of the greater Seoul area edging toward another spike in cases.

Public institutions including welfare centers, libraries and museums are now to remain closed in Seoul and the neighboring Gyeonggi province for the next two weeks.

Clubs, karaoke bars, gyms and concert halls may also be closed again if they fail to follow protective guidelines, including making lists of visitors.

Further measures include soccer and baseball league games being played without crowds again, after stadiums had partially reopened to fans.

Information for this article was contributed by Sarah Mervosh, Nicholas Bogel-Burroughs and Sheryl Gay Stolberg of The New York Times; by Paul J. Weber, Desiree Mathurin, Melinda Deslatte, Kim Chandler and Eric Gay of The Associated Press; and by Dirk Godder of Deutsche Presse-Agentur.