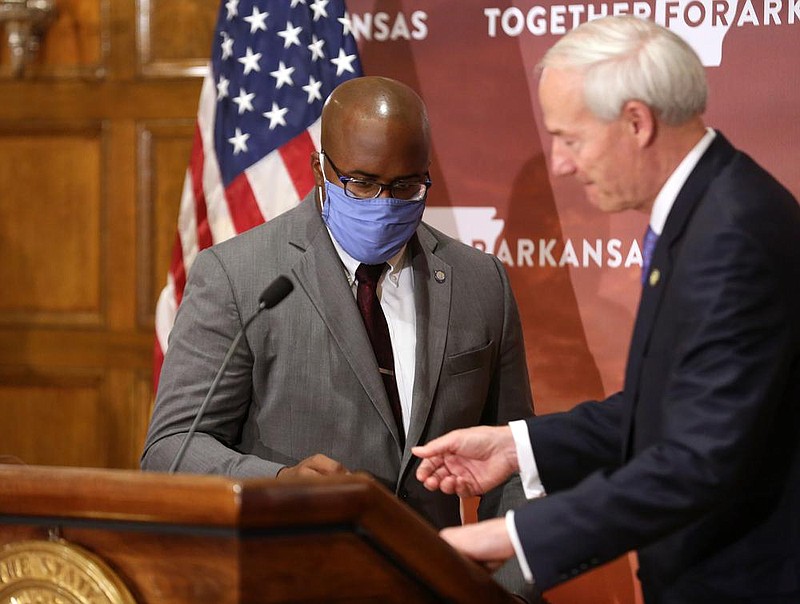 Gov. Asa Hutchinson presents Solomon Graves with his Cabinet secretary's pin after it was announced Graves was named secretary of corrections during the daily covid-19 briefing on Thursday, July 23, 2020, at the state Capitol in Little Rock. See more photos at www.arkansasonline.com/724briefing/

About two dozen state employees outside of the state's colleges and universities recently received pay increases of at least $10,000, according to records.

These raises largely resulted from promotions and became effective in fiscal 2021, which started July 1.

Also in this fiscal year, executive-branch agencies were authorized to use 2.2% of base salaries for merit raises for state employees. Officials estimated that the merit raises will cost about $19.6 million this year, which ends next June 30.

"State employees were awarded a well-deserved increase in pay this year based upon merit," Gov. Asa Hutchinson said in a written statement.

The average salary for 25,530 executive-branch employees is now $45,000 a year, up from $44,121 last fiscal year, said Alex Johnston, a spokeswoman for the Department of Transformation and Shared Services.

The Board of Corrections on July 28 confirmed Hutchinson's July 23 appointment of Graves, who previously worked for the Arkansas Parole Board from 2007 until 2016 and as public information officer for the prison system.

Graves succeeded Wendy Kelley, who was making $161,262.19 before she vacated the secretary's position July 31, records show.

Others receiving raises of at least $10,000 include:

• The Arkansas State Library's new director, Jennifer Chilcoat, received the second-largest raise, as her salary increased by $33,358 to $108,109.87 a year as a result of her promotion from deputy library director, state records show.

Chilcoat replaced Carolyn Ashcraft, who was making $116,442.14 a year at the point she retired. Chilcoat spent 28 years in the Central Arkansas Library System before becoming deputy director of the state library in August 2018.

• The state records show that Renae Hudson picked up the third-largest raise in fiscal 2021 as her salary increased by $33,299.55 to $153,299.75 because of her promotion to deputy attorney general of the civil litigation department in Attorney General Leslie Rutledge's office. (The records identify her by her first name, Cassandra.)

She has more than 25 years of trial and management experience and has worked for the attorney general's office since 2003.

" Renae is the perfect choice to fill this leadership role in the civil department," Rutledge said last month in announcing Hudson's appointment.

• The fourth-largest raise was received by Division of Environmental Quality inspector supervisor Andrea Hopkins, whose salary increased by $29,246.47 to $58,492.93 as a result of becoming a full-time employee, records show.

Hopkins was earning an hourly rate of $28.12, which remains the same, said Donally Davis, a spokeswoman for the Division of Environmental Quality.

• Diane Worm, chief fiscal officer at the state Military Department, received the fifth-largest pay raise with a $28,111.20 increase to $80,509.10 as a result of her promotion from accounting coordinator, records show.

• Records show that Aerial Parish, assistant personnel administrator in the state Department of Transformation and Shared Services, earned the sixth-largest raise of $27,088.67, to $96,959.82, with her promotion from senior software support specialist.

• Kristin Clark, legal division director at the state's Administrative Office of the Courts, picked up the seventh-largest raise with a $23,759.63 increase to $106,991.66, records show.

The raise resulted from the promotion of Clark, formerly staff attorney for the district courts at the Administrative Office of the Courts, to replace Larry Brady, who retired in June, said Marty Sullivan, the office's director.

He said he hired Clark in November 2017. She practiced law for more than 20 years and is the former district judge in Yell County.

Hutchinson's other Cabinet secretaries received merit raises up to 3.1%. Three of them received lump sum payments of 1.5% instead.

Smith's salary was $225,306.22. He's departed for the U.S. Centers for Disease Control and Prevention. Smith's last day in the office was July 17, but his last official day is Aug. 28, said Department of Health spokeswoman Meg Mirivel.

Under Arkansas Code 21-5-211 (b), an employee compensated at the highest pay level authorized for his or her classification is eligible to receive the merit pay increase authorized in this section as a lump sum payment, Johnston said. Under that law, "the increase shall be paid as a lump sum on the last pay period of the fiscal year of the year in which the increase is to occur, and the payment shall not be construed as exceeding the maximum salary," she said.

Hutchinson announced the appointment of Jose Romero as health secretary on Aug. 5.

The Health Department and UAMS didn't grant Romero a pay increase in fiscal 2021, according to Mirivel and then UAMS spokeswoman Leslie Taylor.

In fiscal 2020, Preston's base salary totaled $182,700, including $153,000 in state funds and the rest in private funds from the foundation, state and foundation officials have said. Hutchinson recommended that the foundation grant the "full bonus" of $54,810 for Preston, which it paid in June.

In fiscal 2021, the foundation's annual contribution to Preston, beyond his state salary, is $29,840, which is paid out quarterly, said Hutchinson spokeswoman Katie Beck.

"In terms of cabinet officials, it was important that the approved merit bonuses did not exceed the percentage allocated for other state employees," Hutchinson said in a written statement.

"The approved increases were all less than 2%," the Republican governor said. "Adjutant General Penn's salary is set based upon federal guidelines and is excluded from this calculation."

"As to the variance between cabinet officials on merit increases, there are many factors that enter into the decision from performance to how the total compensation aligns with the other departments as well as the scope of responsibility," Hutchinson said.

At the state Department of Transportation that is governed by the five-member Highway Commission, director Lorie Tudor didn't get a pay raise in fiscal 2021, according to state records.

In late February, the commission voted to promote her to director to succeed Scott Bennett, who departed in March. Tudor received a raise, going from $174,700 to $210,000 a year.

"The decision to forgo a salary increase at this time was arrived at in consultation with the Director and is due to her short time in the position," said Moore, a former state House speaker. "She took over in late March and has shown since then that she is the right person for the job, even in these challenging times."

The largest non-higher education increases in pay at state agencies often pale in comparison with some given at the state's larger colleges and universities because of new jobs.

According to Taylor of UAMS, the three largest raises at UAMS in fiscal 2021 are:

• A $286,931 increase to $350,000 for Dr. Christian Simmons, a vascular surgeon and professor of vascular surgery and a former fellow who joined the faculty as a professor.

According to University of Arkansas, Fayetteville, spokesman Mark Rushing, the three largest raises in fiscal 2021 at the university are:

• A $53,976 increase to $293,976 for David Snow, who previously was an associate vice provost for research and has been appointed as interim vice chancellor for economic development.

CORRECTION: Aerial Parish works for the state Department of Transformation and Shared Services. The agency where she works was incorrect in an earlier version of this story.