OPINION | TAKEOUT TASTINGS: Spy a ribeye at Maddie’s; zip it up at Zangna 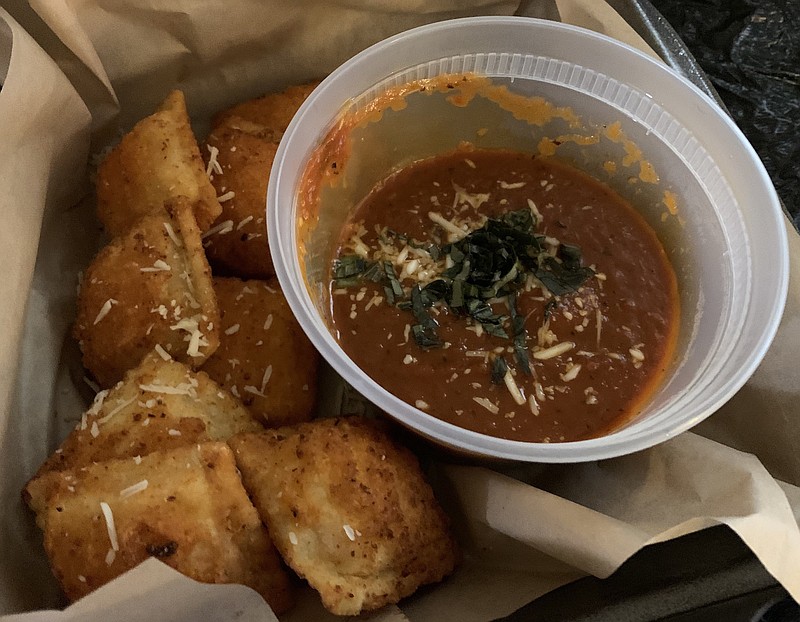 We're continuing our odyssey of out-of-order experiences at area restaurants, this week indulging in a pretty wide range of cuisines.

So we went on a steak out. We're fit to be Thai-ed. And we're telling gnocchi-gnocchi jokes.

As per our custom and ground rules, we visited places within a radius of "it's still hot-ish when we get it home," and we paid for all our meals. 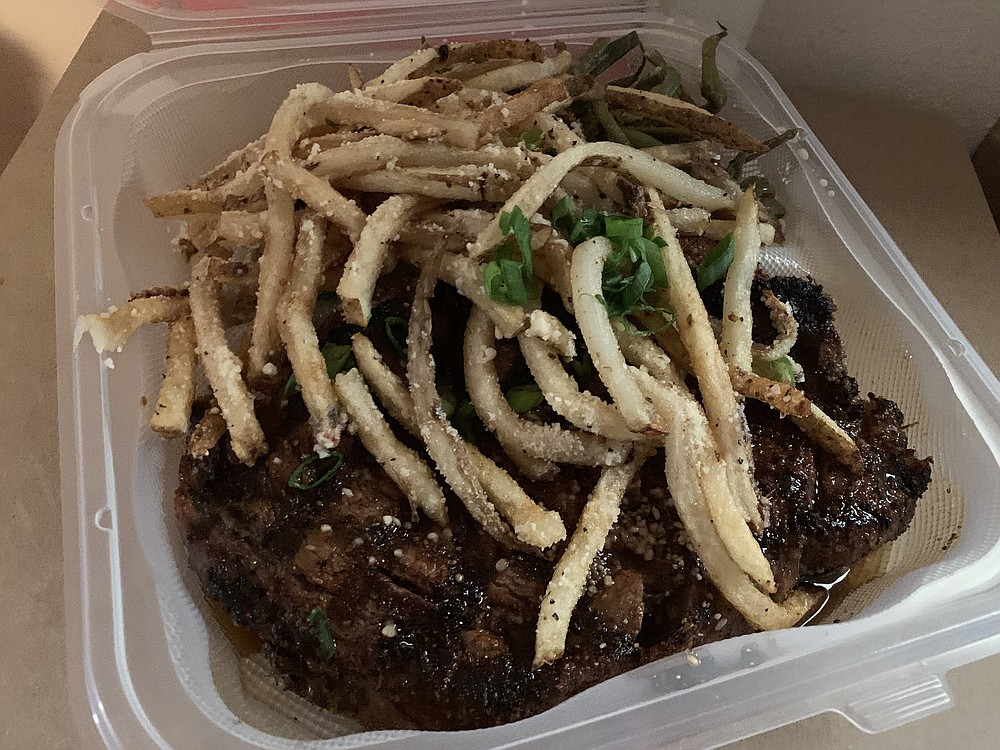 WHAT WE GOT: Ribeye special ($36), Smoked Salmon Dip ($10). Maddie's Place in Little Rock's Riverdale, which has spent several months on hiatus, recently reopened with a somewhat reduced menu that includes a number of New Orleans-style dishes but no longer includes steaks. At which Maddie's has always been good, and which is what we were really hoping for on a recent weekend evening.

Oh happy day! There on Maddie's special board was the single word "Ribeye." And it was one of the best steaks we've had in recent memory (especially so since we haven't had a steak in months). It was huge, medium rare just the way we ordered it, and in a red-wine reduction that kept it moist, juicy, tender and flavorful (was that a fugitive hint of sage?). Being a ribeye, of course, about 10-15% of it was inedible fat, but that comes with the meaty territory.

On the side — well, partially on top — was Maddie's superb signature parmesan fries and a portion of tangy haricots verts. We were so eager to get the steak and fries down while they were still hot that we saved our House Smoked Salmon Dip, which would normally have been an appetizer, for dessert; it took us a few bites of the dip, using the accompanying grilled pita bread wedges, to get used to the strong and somewhat salty flavor, but after that we enjoyed it as much as we had when we got it back in pre-pandemic days. Both dishes came in translucent plastic multi-part to-go containers that we have not previously seen any local restaurants use.

HOW IT WENT: The dining room is open, so after we tried unsuccessfully to get through on the phone for half an hour, we decided to light out thither to place an order in person. We quickly learned why the phone had been so busy — it was ringing nonstop and driving nearly to distraction the poor bartenders, who in addition to pouring drinks were taking and bagging up to-go orders and carrying some of them out for curbside handover. The place was packed solid, and with folks waiting to be seated. Plexiglass dividers separate the booths; portable Plexiglass dividers separate tables and also frame the booths so that only the space directly leading to table access by the wait staff is open. Nothing, however, separates the bar from the closest tables, which are not 6 feet away; neither are the bar stools 6 feet apart. That, though we were masked the whole time, produced in us some anxiety during our 20-plus minute wait for our order (the tiny kitchen was absolutely slammed). We might have been less anxious if we had remembered that co-owner/chef Brian Deloney has installed an ionizing system in both air-conditioning units that is supposed to eliminate airborne pathogens.

HOW IT'S GOING: The place was packed, inside and on the patio, with a five- to 10-minute wait for tables. And the bartenders were handling at least a half-dozen to-go orders while the phone rang with more. 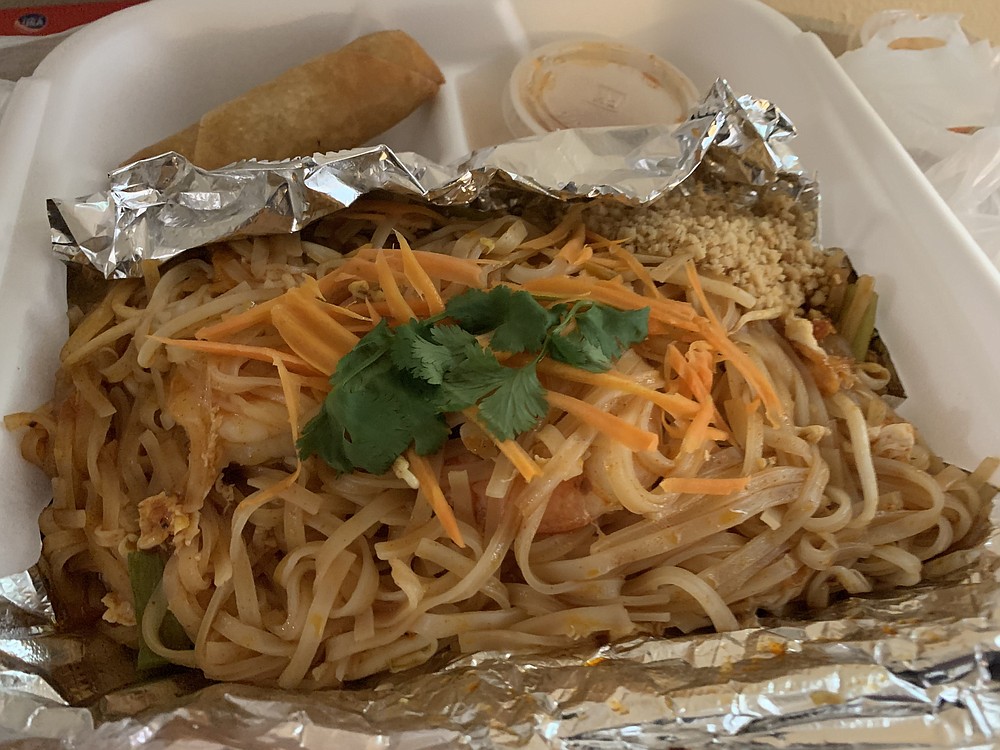 WHAT WE GOT: The Shrimp Pad Thai lunch combo ($11.99), Chicken Satay ($8). We've been itching for a chance to revisit Zangna, which we have enjoyed in the past, and pounced upon an opportunity after a pre-lunchtime appointment brought us physically close.

The satay was the best we've had in a long time, four skewers of marinated chicken grilled lightly enough so it stayed moist — and one complaint we often have about satay is that the chicken is dry. The accompanying peanut sauce was perfectly balanced, plenty of peanut flavor and not too sweet. It comes with a side cucumber-and-red-onion salad swimming in a vinegary dressing; we picked out the chunks of cucumber and mostly left the onions. Listed as an appetizer, there was enough there to make a meal in itself. And the skewers came wrapped in aluminum foil, which kept them piping hot.

We played it safe and picked the Pad Thai from among the lunch combos, though we will soon venture back to be a little more adventurous. It featured the flatter rice noodles tossed with minimal veggies in a vivid but not especially spicy sauce; what had seemed to be a miserly portion of the "fish" sauce we got on the side was just enough to nicely complement it. The kitchen supplied plenty of pulverized peanuts on one side that we mixed in. It, too, came foil-wrapped for longer warmth. And we got a crisp, meat-filled spring roll as a bonus. There were three drawbacks: only four shrimp, though they were good-sized and firm, and they were, alas, tail-on (we've commented before on not liking to have to dip our hands into our food to remove shrimp tails). And there were no lime slices (lime juice adds an extra flavor dimension).

HOW IT WENT: Zangna is only open for to-go orders. We placed and paid for the order on-site and it took about 10 minutes to come out of the kitchen, not bad considering we were at least third in line. A Plexiglass partition separates the woman behind the counter, who was neither masked nor gloved, from the customers.

HOW IT'S GOING: Two gentlemen placed their orders ahead of us and one gentleman stopped in to pick up an order he'd placed by phone and paid for in advance. 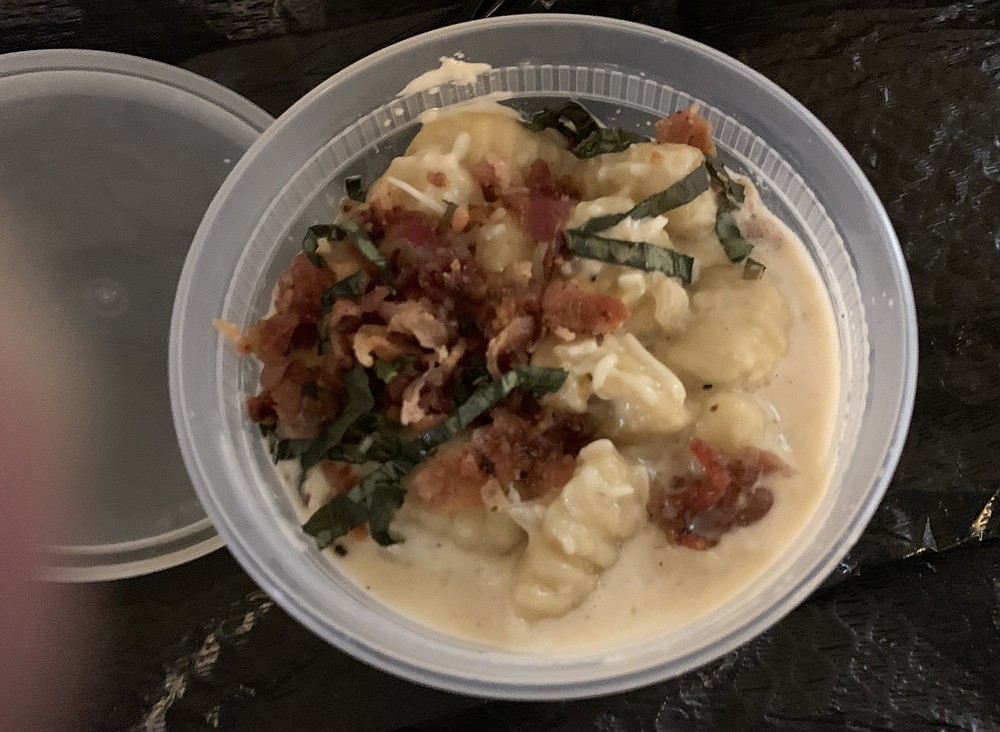 The order-taker was right: The gnocchi from Sauce(d) was better with bacon. (Arkansas Democrat-Gazette/Eric E. Harrison)

WHAT WE GOT: Fried ravioli ($10) and Gnocchi ($14). Our favorite fried ravioli around here comes from Bruno's Little Italy, where for something like six decades they have called it "toasted ravioli." Like theirs, these are medium-small pasta pockets filled with a ricotta mixture; unlike theirs, these are pretty much uniform in shape. They were only slightly crispy; they came with a big plastic vat of vigorous herb-and-grated cheese-topped marinara sauce, far more than anyone would ever need just to dip them (though about right if you're thinking of bathing them). The nice young woman who took our order for the gnocchi, potato dumplings in a house-made cheese sauce, suggested we get them with bacon. "It's better with bacon," she explained. And she was right: The dumplings are pleasantly firm and slightly chewy and the cheese sauce that surrounds them is pleasant but not very sharp; it paled quickly without the bacon, which gave the dish nice dimensions of flavor and texture.

HOW IT WENT: Sauce(d)'s dining room is open, but we placed our order by phone and although curbside hand-off is available, we didn't quite figure out how that worked, so we entered and paid inside. The young woman at the counter was masked and gloved.

HOW IT'S GOING: The place, operating on a limited seating capacity, was busy with dine-in and bar customers, most of whom were masked unless they were eating. The owners are also in the process of setting up something in the nearby former Zin Wine Bar space in the same side of the same shopping center.