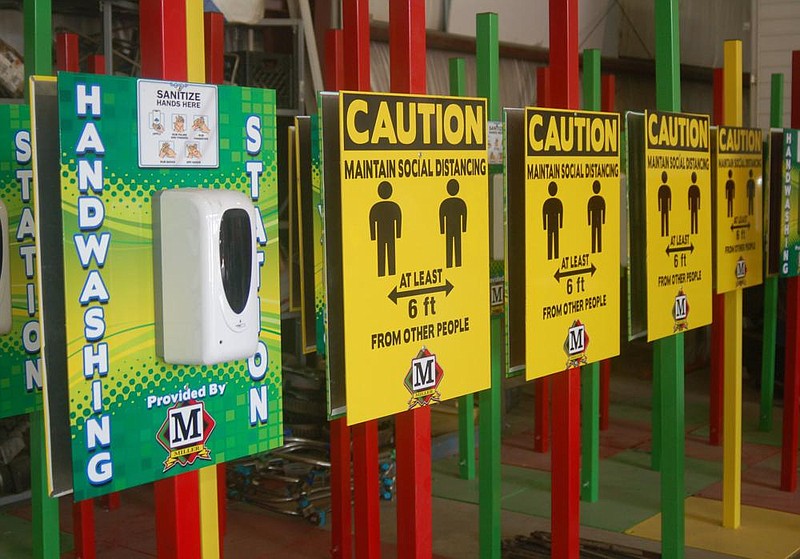 Miller Spectacular Shows spent more than $25,000 on hands-free sanitizing stations and social-distancing signs early on in the pandemic but the owner has seen his business dry up with the cancellation of county fairs and other events. (Arkansas Democrat-Gazette/Stephen Steed) ( Stephen Steed)

Most county fairgrounds in Arkansas are all but silent this year, with their midways clear of carnival rides and food trailers, their exhibition halls void of prize-winning jams, and their livestock barns free of goats, cows, rabbits, hogs and other animals raised by teenagers.

Near Greenbrier, a Tilt-a-Whirl has been dismantled, with its seats being prepped for a new coat of paint as the owner of the Miller Spectacular Show makes plans for 2021 after more than 40 events this year were scrapped.

In Batesville, the board of the Independence County Fair voted to cancel this year's event, on its 100th anniversary, and to cut off utilities at the fairgrounds to save money for the rest of the year as it wrestles with an estimated $80,000 revenue loss. "It's really sad to drive by and see it all dark," board secretary Pam Lloyd said.

In Little Rock, with the cancellation of the State Fair, its pageants and talent contests will go online, with crownings, scholarship announcements and cash prizes tentatively set for Oct. 24, also online.

And in Marvell, Barbie Washburn keeps track of plans discarded, altered or still being considered among the 75 county and district fairs that are members of the Arkansas Fair Managers Association, of which Washburn is president.

By Washburn's count, 20 county fairs have been canceled altogether. Most of the others have continued with livestock shows, either online only or with limited attendance, for the benefit of members of 4-H clubs and Future Farmers of America chapters.

Organizers of some fairs scheduled for September and October are hoping for a break in the coronavirus's spread and are holding off any cancellations or changes, Washburn said. "The way it's looking, I have a feeling they'll be canceled, too," she said.

Washburn said she didn't know of any fairs that have had carnivals, the primary driver of attendance at any fair.

County and district fairs reported 640,515 visitors in 2019, according to the state Department of Agriculture. Attendance this year will be a fraction of that, resulting in the loss of admission fees, the usual percentage of sales from vendors and amusement rides, and exhibitor fees.

There's also a "ripple effect" on cities and counties when fairgoers aren't stopping at convenience stores and gas stations, Washburn said. For larger fairs, such as the State Fair and multicounty or regional fairs in Fort Smith, Harrison, Jonesboro and Texarkana -- all of which have been canceled -- visitors aren't booking hotel stays or dining out, she noted.

The Four States Fair in Texarkana has lost at least $500,000 in revenue with its move from September to April and another $118,000 in rental income when a dozen other events at the fairgrounds were canceled, according to Lisa Garner, the fair's chief operating officer. An area hotel reported the loss of 259 room-nights with the fair's cancellation, she said. Livestock shows are still set for September.

The Newton County Fair will lose $100,000 in fair revenue and from sponsors, Alice Williams, its manager, said. "The fair is the biggest thing that happens for the people of Newton County," Williams said in a text message.

The Baxter County Fair's cancellation means a revenue loss of $163,000, including $69,000 in admission and $43,000 from the carnival. A recording for the fair association's telephone number said its office was "closed indefinitely."

"Without help from the state, a lot of county fairs won't exist next year," said Weldon Wynn of Star City, manager of the Lincoln County Fair, who sought and provided some of the information from the fairs in Baxter, Newton and Independence counties and the Four States Fair to alert Arkansans of fairs' plight.

Although state grants are available for construction and other improvements, tax dollars don't flow to fairs for general operations. Only the largest fairs have paid staff; fair associations in the state generally are registered as nonprofits, with volunteers serving on their boards.

"Fairs like ours in Lincoln County, we get by through fundraisers, putting on horse shows and rodeos and carnivals, and renting out buildings," Wynn said.

Some lawmakers called the 2018 transfer from the governor's "rainy day" fund to the State Fair a bailout unavailable to other fairs hurt by the same poor weather.

PREP FOR NEXT YEAR

The Miller Spectacular Show saw an early end to its season with the cancellation of more than 40 fairs, festivals and other events, said Freddy Miller, the fourth generation of his family to run the company.

"We're financially stable enough to weather the storm, but there's a lot of uncertainty about next season, whether the virus just keeps rolling into 2021," Miller said. "We're the largest carnival in Arkansas and one of the largest in the central U.S. I think we'll be OK, but a lot of the smaller carnivals aren't going to survive a hit like this."

During the pandemic's earliest days this spring, Miller was still confident the 2020 fair season would go on. He spent about $25,000 to construct hands-free sanitizing stations, produce sturdy social-distancing signs for strategic placement around his midway, and refurbish ticket booths to limit contact between employees and customers, he said.

"Early on, I thought I was seeing light at the end of the tunnel, but it was just another train a-coming," Miller said. 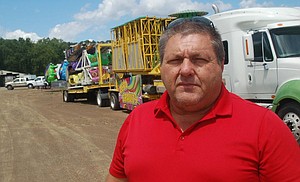 Miller has about 150 employees for a season that runs from early spring into late fall, but his company's road show has been shut down except for two small events: a fundraiser for a Greenbrier man with cancer and the Rose Bud Fun Fest.

"I have a small crew in my shop working now to refurbish and clean equipment," Miller said. "That's about all we can do, get ready for next year."

Some of his workers have found other jobs; others have been receiving unemployment. Some workers -- from Mexico, on H-2B temporary work visas -- never arrived because the U.S. Embassy in that country shut down in the pandemic's early days.

Miller's operations include a fleet of more than 150 tractor-trailer combinations that carry the 55 rides, a half-dozen food trailers and a few generators nearly as big as mobile homes. All those trucks and rides, along with another fleet of recreational vehicles and travel trailers that house employees on fairgrounds, are idled.

The Paycheck Protection Program within the Coronavirus Aid, Relief, and Stimulus Act approved by Congress did his company no good, he said. "That was a great program for a lot of businesses, to help them keep their employees, but it did zero for us because, as events got canceled, I didn't have any place to send them," Miller said.

"A lot of bigger carnivals will buy out the smaller ones," Miller said "There will be a trickle-down effect. There are not enough carnivals anymore to do every county fair in Arkansas, and there are a lot of fairs that don't have carnivals already. You're going to see fewer carnivals and fewer fairs, and that is sad on so many levels."

NO CARNIVAL, NO FAIR

Washburn also is president of the Tri County Fair, for Phillips, Lee and Monroe counties, which had been scheduled to open Labor Day in Marvell.

"Without the carnival, there was no use in trying anything else," Washburn said. "The livestock barn is too small for animals and exhibitors after putting in all the social-distancing guidelines and requirements. But we're still more fortunate than others: our fair association owns the fairgrounds, so there's no rent but, of course, we will have utilities and upkeep to pay for."

About 6,000 people attended the fair last year, paying about $24,000 in admission, Washburn said.

"By the time we collect the gate and from vendors, we can usually break even or make a little profit that carries us through the winter," Washburn said. "We won't have that this year."

Like amusement companies, fair associations spent thousands of dollars getting fairgrounds ready under guidelines early on in the pandemic, only to see guidelines virtually become restrictions, Washburn said.

"I understand all the concerns for health and safety and why fairs have to cancel, but that doesn't lessen the heartbreak," she said.

While state health departments across the nation didn't exactly close down fairs and carnivals, restrictions on large events, whether indoors or outdoors, made holding such events impractical, unprofitable, or both.

The Fulton County Fair Association was able to hold a junior livestock show, with restrictions on attendance and the number of exhibitors, manager Carolyn Lewis said.

The association also got approval from the state Department of Health for a concert July 24 in the Salem Civic Center, featuring Cory Jackson of Jonesboro and Marybeth Byrd of Armorel. The two Arkansans appeared last year on "The Voice" singing competition broadcast by NBC.

The Fulton County Fair Association also has canceled or postponed its spring fair, a flea market, a rodeo and a truck pull. Family reunions, graduation parties and weddings reserved at the Salem Civic Center have been canceled, a loss of about $10,000 in rental fees. Lewis said.

Lewis said she can't fault health officials for any of their guidelines -- except for one, a federal suggestion to keep animals in livestock shows 10 feet apart. "With cattle and horses, you can do that," she said. "But not with hogs; they have their own ideas. They're not on a halter."

NO AID IN SIGHT

There's little hope much can be done for the fairs' immediate financial woes.

Sen. Ron Caldwell, R-Wynne, said he'd like to see every fair in the state get at least $30,000 to help tide them over into next year. "That won't pay all their bills, but it might be enough for them to survive," Caldwell said.

But the Arkansas General Assembly doesn't meet in regular session until January. Any financial help approved wouldn't flow to fairs until the summer, with the start of the state's new fiscal year, Caldwell noted.

With Congress stalled on another pandemic-related aid package, a bill to send $500 million to fairs across the nation also is in limbo.

The Arkansas Agriculture Department recently sent $692,809 to fairs and fair-related entities eligible for reimbursement for certain expenses incurred from last year, mostly for "premiums" paid to students exhibiting animals they've raised and for cash awards to students in other exhibits.

Those reimbursements have been made for decades, amounting to $3,000 to $4,000 per fair, according to the fair managers association.

The Legislative Council, which conducts the General Assembly's business when it is not in session, voted in July to allow fair associations to use that money, temporarily, for general expenses and operations.

"A few thousand dollars certainly help, and giving us some more flexibility helps, too, but we have utilities and monthly expenses of about $11,000," said Lewis with the Fulton County Fair.