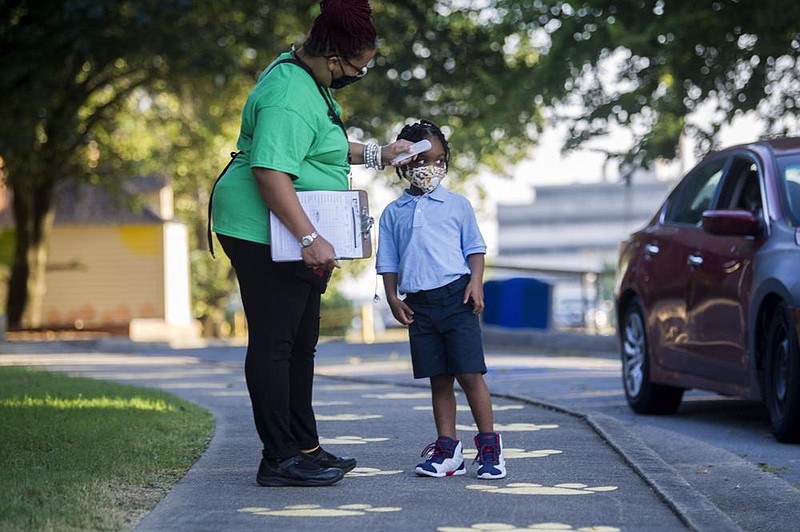 Monday's start of the 2020-21 school year was like no other first day before.

Large numbers of students started the academic year by not leaving their homes, working instead to connect to their schools, teachers and classmates online -- and encountering some glitches in doing so.

Those who attended class on campus for the first time since the abrupt shutdown of in-school instruction in mid-March did so with the previously unheard of practice of wearing masks.

And faculty members wearing masks or face shields directed those students down one-way halls to separate meal-eating spaces and to classrooms where there were physically distanced seating arrangements.

Navigating through the uncharted territory of online and even in-person instruction Monday also meant coping with myriad technology issues -- forgotten or unknown passwords, undelivered Chromebooks and hot spots, and even a slowdown of services from national providers.

All the changes this year are part of an effort to contain the spread of the coronavirus.

A marquee sign in front of Little Rock's Terry Elementary confronted the challenge of the year to come.

"Welcome Back," the sign said Monday. "Our focus is grace, grit and integrity." .

D'untae Floyd, 17, is a senior who has seen a lot of first days of school -- but none like the one Monday.

"I wanted the experience," Floyd said about being on the new campus that replaces both McClellan High and his former J.A. Fair High. His two closest friends chose the virtual school route.

"I have to pinch myself," Southwest English teacher Trish Poore' said about her delight with the new building and its spacious, clean classrooms, which she compared to classrooms shown on television shows.

Poore', who previously taught at Hall High, had five ninth graders in her first-period English class Monday. She expected 12. She was also waiting for more directions on how she will teach those who will be doing their classwork from remote locations.

Just under 700 students of the 1,800 enrolled were expected at Southwest on Monday, Principal Marvin Burton said. A different but similarly sized group of students whose last names start with N through Z are scheduled to be on campus today. The others assigned to the school are taking their courses remotely for the early part of the year.

Burton roamed the school, introducing himself to students.

"Do you like this science lab?" the former science teacher exuberantly asked a half-dozen girls in Angela Braggs' physical science class. "I designed it," he said.

Two Arkansas school systems -- Woodlawn in Rison and KIPP Delta Public Schools in Helena-West Helena -- each had a person test positive for covid-19. That led to others being exposed.

"If your food service has a challenge, that becomes a challenge for the whole school," Key noted.

The Woodlawn district is attempting to hire substitutes for those who have to be away, with the goal of having students and staff members on campus as soon as Wednesday, Key said.

Woodlawn Superintendent Dudley Hume said on the district's website that the start of the school year had to be delayed from Monday to Wednesday out of an abundance of caution.

"We had every intention to start [Monday], but safety became my first priority," he said. "The timing could not have been worse ... and I was unable to make a decision until late in the evening. I apologize for any inconveniences, but your children and the staff's safety are my top priority. This precaution allowed me and my administrative staff the opportunity to ensure the safety of students and other staff members. We would rather be over cautious rather than not in this case."

"Best we can tell, they were not following correct precautions, and this is the thing that happened. It's an admonition to everyone," Key said.

"They are working with us and the state Health Department to prepare a plan going forward to get things rolling again," he said.

William Hill, the KIPP charter system's executive director, said in a telephone interview later Monday that school officials followed the Arkansas Department of Education guidelines in calling a state helpline and were advised to have 27 staff members quarantined immediately.

"Based on that information and the fact that it was completely impossible for us to run the school with that number of staff members out -- at that point we made the decision to transition to virtual learning for the next 48 hours while we reassess our situation and determine what our next steps are," Hill said.

The 48 hours affect today and Wednesday. Hill said he couldn't predict what the situation will be Thursday until data from contact testing becomes available from the state Health Department.

The KIPP campus has about 524 students, 60% of whom had already opted for remote learning, Hill said.

The Conway School District told parents Monday that the district was experiencing some technical difficulties.

"This morning, a statewide systems issue disabled all CPSD student logins," according to a message posted on the school district's website. "We are currently working with the state to resolve this problem."

The district offered assurances that students would not be penalized by the problems.

"These first two 'staggered start' days were designed to allow time for concerns such as this," the website said."

"We're trucking along," said Jessica Duff, executive director of communications in the Pulaski County Special School District, where 38% of students have opted for an online-only instructional program, 33% have opted for traditional in-school instruction and 29% have asked for a blend of digital and on-campus work.

Any hiccups in the delivery of instruction that do occur right now are being experienced nationwide, Duff said.

"There is a sense of grace and understanding that everyone has as we work through things," she said.

North Little Rock School District interim Superintendent Keith McGee said he visited 11 of the district's 14 buildings, where he saw good use of masks, high teacher attendance and good use of social distancing in class and on the buses.

"One of the things we are interested to see is how we can plan and adjust when more kids come on site," he said.

McGee said 4,625 students signed up for the district's virtual academy this year in the 8,000-student school district. He said on Monday that about 2,900 students showed up for in-person instruction.

"I don't know where the remaining students are, but I am assuming they are just waiting to see how this all plays out," McGee said.

The district had no more than 14 students on any of its buses Monday.

The district's use of thermal camera equipment to scan students' body temperatures as they entered schools worked without a hitch, McGee said.

Stephanie Nehus, superintendent of the Hot Springs School District, said it was a "fabulous" first day at school.

"It's exciting to get our kids back on campus, and everything has run very smoothly," she said Monday afternoon.

"We do allow what we call mask breaks when they can social-distance, but we are encouraging them to wear masks as much as possible," she said.

Nehus said three-sided Plexiglas desk shields had been purchased for all 3,600 students in the school district. Besides wearing masks, teachers are also wearing face shields, the superintendent said.

With fewer students on campus, it's easier to spread them out in classrooms, she said.

"We've been transparent since Day 1 that they're not going to be 6 feet apart in all classrooms, but we're spacing them out as best we can," she said.

"We've been very blessed," she said. "We've not had any situations where we've had probable close contacts on-site."

Nehus said students aren't using lockers this fall. Every student has a Google Chromebook -- a laptop computer on which learning materials can be stored -- so fewer traditional textbooks are necessary, she said.

'A LOT OF SMILES'

"Our main struggle right now is trying to manage the virtual kids," Tucker said. "This is Day 1. We're going to have to work the bugs out."

Tucker said the school district has about 4,200 students. He said 24% of them are taking all their classes online.

"Most of our teachers are doing a hybrid-type classroom," Tucker said. "The struggle is the teachers having to adjust their style of teaching to be different than it was last year."

Tucker said the district has distributed 2,500 Chromebook laptops so far. He said another 1,800 are on order and should arrive in October.

Tucker said he greeted pupils as they arrived at Yocum Elementary School on Monday morning.

"Appeared to be a lot of smiles, but of course you can't see them," he said. "Everybody seemed to be in a good mood."

In east Arkansas, Jon Collins, superintendent of the West Memphis School District, said 63% of the district's 5,400 students have opted to take all their classes online.

Collins said all pupils in kindergarten through second grade were supplied with Apple iPads. Students in grades 3-12 have been furnished with Chromebooks.

"If we have to pivot, if we get into a closure situation like we did in March ... then we want to make sure every kid is ready, prepared and we don't have a gap there," Collins said.

Jake Long, superintendent of the Mountain Home School District, said he watched kindergartners arrive for the first day of school on Monday.

"I guess that was my surprise this morning," Long said. "While this world we've been preparing for has been stressful for us, the kids are still excited -- and for those kindergartners, it's all they know."

All students had their temperatures taken when they arrived at school, Long said. From there, many scampered toward the school buildings.

Suzanne Wilson, assistant superintendent of the Greenwood School District, said via email Monday that the district has about 500 students attending school in its "Bulldog Online Learning Program" for the 2020-21 school year. The number of students engaging in on-site, face-to-face learning was about 3,300 as of Monday, although the district expects both these numbers to fluctuate over the next week and start to solidify by the first full week in September.

Over the past two months, Wilson said, the district consistently released information to prepare students and families for the first day. The district also sought feedback from parents and community members to make certain decisions leading up to school reentry. As a result, the district's reentry and Ready for Learning plans were both thorough and well-received, Wilson said.

Key, the state education secretary, said that school-related covid-19 cases and exposures are bound to happen "in this very unusual school year," but he hopes they can be contained and that districts and the state can minimize the impact.

"We'll work with districts to not have to close to on-site instruction. Even if a critical response is necessary, we will do what we did in the summer -- which was limiting the number of students and staff in a room to no more than 10. That way students who really need instruction, interventions, therapies can access those on campus.

"I'm hoping we never have to go all-remote this school year," Key said.

Information for this article was contributed by Stephen Simpson and Thomas Saccente of the Arkansas Democrat-Gazette. 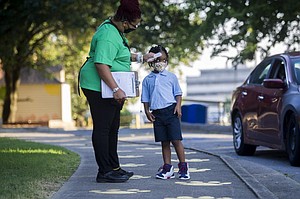 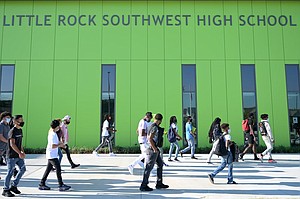 Photo by Stephen Swofford
Students walk between the gym and the school Monday on the first day of classes at Little Rock Southwest High School. (Arkansas Democrat-Gazette/Stephen Swofford)
ADVERTISEMENT