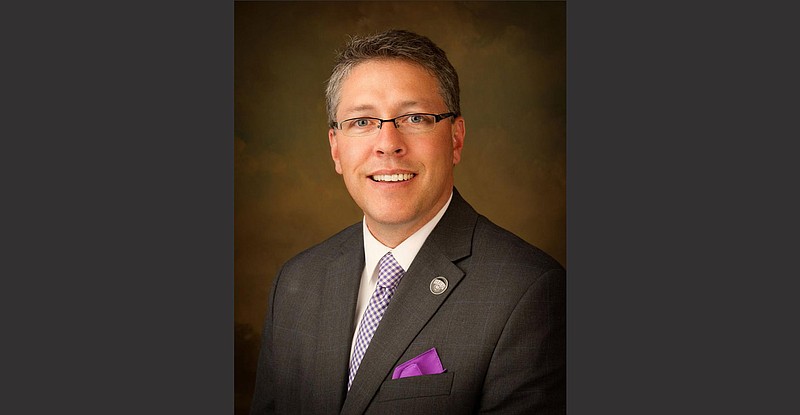 Before Brad Teague was navigating University of Central Arkansas athletics through a pandemic, he was Delta State University's ace pitcher.

Those who played alongside him characterized Teague as steady on the mound, often precise with his pitches and unafraid to go right at batters. He'd throw it up and in to back you off the plate, and the next thing you know he's striking you out in the outside corner.

"He wasn't scared to bust you under the chin," said Brad Cohen, a teammate of Teague's at Delta State. "He was a great psychologist when he was pitching. You didn't know what was coming."

Now, 28 years later, Teague has taken a similar approach to attacking the coronavirus pandemic as UCA's athletic director. He hasn't veered away from the virus, instead taking it head on, leaning into safety and science along the way -- UCA only had two positive tests out of 166 players, coaches and staff tested Wednesday.

While other schools have faltered, Teague and UCA have stayed persistent. UCA has been adamant in playing this fall despite every FCS conference postponing football until the spring, making the Bears one of 15 FCS schools planning to play at least one football game this fall and the only FCS program with a nine-game schedule. Since Aug. 13, the day the Southland Conference decided to delay fall athletics, Teague has added a remarkable seven games to UCA's 2020 schedule that will also help the university earn back all $425,000 it lost from the Missouri game cancellation.

"You don't worry about work ethic with Brad Teague," UCA President Houston Davis said. "He has gotten out and advocated for his sports and student-athletes and provided opportunities for them for this fall."

And at 8 p.m. Saturday on ESPN when UCA takes on Austin Peay in the first game of the 2020 college football season, Teague's months of preparation will finally come to fruition.

"From a brand standpoint, Brad looks like the AD of the year. And if this works, he's going to look like the smartest guy in the universe," said Brian McLaughlin, the FCS national coordinator for HERO Sports. "I know there's probably a lot of people doubting it and wondering if the whole thing will collapse and who knows, maybe it will. But it sure seems like they're going to go down swinging."

Davis had just returned from vacation where he spent time in the Ivory Coast, Ghana and France. At the time, those countries were already taking covid precautions, and Davis feared it wouldn't be long before the virus made its way to Conway.

So, four days after returning, Davis called a meeting with his cabinet, which consists of 10 university vice presidents, including Teague. The cabinet discussed new residential policies, how it planned to finish the semester and even the potential fallout for fall sports.

"Across the country, there weren't a lot of conversations then about how this was going to affect college campuses," Davis said. "But we were ready when it hit in March."

A few months later, on May 15, Davis met with Conway Regional Hospital CEO Matt Troup and Hendrix College President Ellis Arnold. The three had devised a plan for Conway Regional to help UCA, Hendrix and eventually Central Baptist College with covid protocols, including providing "robust testing" for all students.

This allowed UCA to have an advantage over many other FCS programs which are unable to meet the NCAA's guidelines for testing that requires athletes to test 72 hours before competition.

"If we were a university that was beginning in June and July to try and meet those NCAA criteria," Davis said, "I think we would have joined other universities in the country in throwing up our hands and saying, 'We can't possibly do that in this period of time.'"

Teague, who was a part of nearly all the covid discussions and partnership with Conway Regional, was consistent in his approach. For him, it always came back to what is best for the athletes?

"Dr. Teague has not wavered," said football Coach Nathan Brown. "I think that's what our players saw, too, that he was committed to playing early on. He came and had face-to-face meetings with our players. A lot of athletic directors probably try to avoid that, but he hit it head on."

It was that mindset that led him to wanting to play this fall. Teague spent the last six months listening to players and answering their questions. He showed up to practices and events, asking what the players wanted to do.

And Teague was going to do everything in his power to make sure they would have the opportunity to play.

"It meant a lot to me, personally. Just for him to come speak to us practice and be open and willing to answer those tough questions," junior quarterback Breylin Smith said. "Again, that ties into our administration and the leaders within our program who have done a great job."

The past month has certainly been one of the most challenging in his career, Teague admits.

He lived in his office and on his cellphone, sending mass text messages and leaving long voicemails to athletic directors around the country hoping he could piece together a formidable football schedule.

"I didn't want to let the ball drop at all," Teague said. "There's no doubt this is the toughest schedule we've ever had, but it's also the most exciting we've ever had."

UCA's original 11-game schedule consisted of nine conference games, a trip to Missouri for $425,000 and the neutral site game in Montgomery, Ala., against Austin Peay. After the Southland's decision to postpone fall athletics and the SEC's decision to play a conference-only schedule, only the Austin Peay game remained.

Teague has since scheduled games against three FBS opponents, which include monetary supplements that total $450,000 to fill the Missouri void: At Alabama-Birmingham on Sept. 3 for $200,000, at Arkansas State on Sept. 19 for $100,000 and at Louisiana-Lafayette on Nov. 21 for $150,000. He's scheduled home-and-home series with Missouri State and Eastern Kentucky. And he most recently landed a deal with three-time defending FCS national champion North Dakota State, which agreed to pay for UCA's travel with $100,000.

Teague credits his connections from serving on the NCAA Football FCS Playoff Selection Committee between 2015-19 for helping him put the nine-game schedule together. But Teague has become well-respected in the industry for more than serving on a committee.

"He's a high energy personality, but I think you have to look at his credentials," Southland Conference Commissioner Tom Burnett said. "I think Brad walks into a room of faculty, other academicians and carries a certain level of credibility that maybe some others don't. He's always embraced his student-athletes like an extension of his own family and that is very obvious when you speak to his student-athletes."

Teague has used that knowledge and those connections to his advantage during the pandemic. He's put the safety of his athletes first and backed his decisions on numbers and science. And people around not only the FCS, but the NCAA are taking notice.

"I think between Dr. Teague and Coach [Nathan] Brown and all of our coaches, I think we are known as a Division I and FCS program that does things right," Davis said. "And I think word has gotten out about the way we've approached covid-19. I think that's a testament to Brad."

"I didn't want to fail," said Teague, who was awarded the Gulf South Conference Commissioner's Trophy as the top athlete in the conference in 1992. "I think that mindset just carries me [in] anything I do."

That competitiveness is still there today. Teague is unafraid of competition, which is why he scheduled the most FBS opponents in program history for the 2020 season. But he hasn't done it without thought, either.

He's ensured that his staff and athletes' safety come first while also only scheduling opponents that he knows are taking the virus as seriously as UCA. And he's used UCA's partnership with Conway Regional as a constant backing point for why he feels comfortable in allowing his athletes to play.

And he's focused solely on what he can control.

"I was impressed that they had the guts to not bow down to public perception of what they should do and made a decision on their own," said McLaughlin, who has covered the FCS for the last five years and is considered an FCS guru. "I just think they had a lot of guts with this and I think people would be hard-pressed to find a reason why UCA shouldn't have done this because this is a great fit for Conway, Arkansas."

This Saturday will be a large moment for Teague and UCA. The Bears will be put in the national spotlight, for better or worse.

"'How in the world do you think you can play?' I've heard a little of that," Teague said. "You have fans and you have detractors, but that's OK. ... We feel like we've done what we should be doing, even more than the NCAA has asked in terms of the health and safety of these student athletes."

Whether UCA only plays Saturday or all nine games, Teague knows he's done all he's can. He never swayed from his fierce yet vigilant approach.

And that's not going to stop Saturday.

"That sounds just like Teaguer, still throwing up and in. He knows what he's doing," Cohen said. "And when he gets something in his vision, he's going to follow through with it."