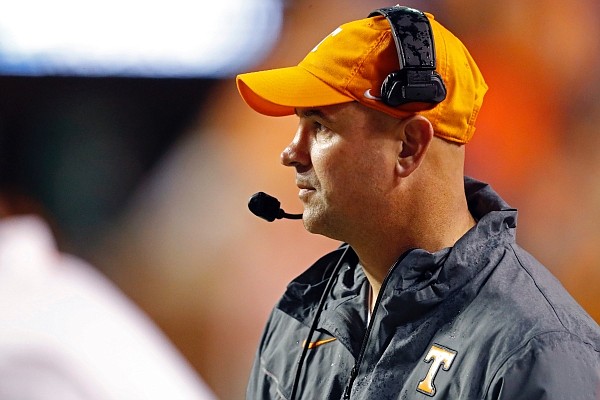 Seventh in a series previewing the 2020 SEC football season.

FAYETTEVILLE — Tennessee scripted one of the most dramatic seasons among the non-contenders in the Power 5 ranks in 2019.

After opening with a shocking 38-30 loss to Georgia State and opening 1-4, many observers felt second-year Coach Jeremy Pruitt was trending toward an early ouster at season’s end.

Then the Volunteers went off and won seven of their last eight games, including their final six in a row. They capped it by rallying for a dramatic 23-22 win over Indiana in the Gator Bowl. The Vols’ comeback from a 22-9 deficit made them the only team in the country to overcome a 13-point deficit in the final five minutes of a game last season.

That sizzling finish has Tennessee fans thinking Year 3 under Pruitt could awaken echoes of the not-too-distant past. It wasn’t that long ago the Volunteers went 152-52 under Phillip Fulmer, now the program’s athletic director; won the first Bowl Championship Series national title in 1998; and played in five SEC championship games in an 11-year span from 1997-2007.

Since Fulmer walked off the field after a 21-14 loss to LSU in the 2007 SEC Championship Game, the Volunteers have been the definition of mediocre with a 75-75 record.

Pruitt made this point when he was hired by Fulmer after a disastrous head coaching search in the winter of 2017.

“There was a time and place that this university was feared,” Pruitt said then. “My goal as the head coach of the University of Tennessee football team is to get us back to that point.”

And that’s still a work in progress, with some hurdles in the way. The Volunteers elected to call off Friday’s practice due to a number of positive covid-19 tests.

Pruitt’s short tenure has featured shocking losses, like an overtime setback at home to BYU in Week 2 last year, but also resplendent wins. In his first season on Rocky Top, the Volunteers logged a 30-24 upset at No. 21 Auburn, Tennessee’s first upset of a ranked team on the road in 12 years, and a 24-7 victory over No. 11 Kentucky.

The Volunteers, who landed the No. 10 recruiting class in the country as rated by 247Sports.com, have much more returning experience on offense, where former University of Arkansas coordinator Jim Chaney is back for his second stint with the Vols.

Senior quarterback Jarrett Guarantano, a 25-game starter, is expected to be challenged by highly regarded freshman Harrison Bailey — who missed practice time in camp while serving a quarantine due to covid-19 protocols — as well as holdovers J.T. Shrout and Brian Maurer.

Chaney, speaking on a video conference Thursday, gave away no hint of where the Vols are headed at quarterback.

“Equal reps across the board,” Chaney said. “Everything’s up in the air. We’re way too early to make decisions on that. They’ve got to be put under the fire. They’ll earn that two-spot, three-spot, four-spot. There’s competition throughout the team, but particularly at that spot.”

Chaney praised the young Bailey, saying: “He’s going to be a solid football player for us. Yesterday he threw some very nice balls for us. It’s obvious some of the concepts he has a grasp on. He looks to be like every other freshman quarterback I’ve seen.”

Trey Smith at left guard leads what could be one of the best offensive fronts in the SEC. Sixth-year senior center Brandon Kennedy is an Alabama transfer, and tackles Wanya Morris and Darnell Wright were both five-star signees in 2019 who won starting jobs.

Smith missed most of his sophomore year in 2018 due to blood clots, but he recovered last season and became a mainstay, even while he hardly practiced throughout the season.

The line is already drawing rave reviews in camp.

“They continued to improve and develop some chemistry up there,” Pruitt said last Saturday.

“We’re playing a lot of guys, [with] a lot of guys getting a lot of different opportunities up there. … You can tell from a conceptual standpoint we’re a lot further ahead than we probably were when we practiced in the spring thanks to the OTAs we had this summer.”

Former Georgia offensive lineman Cade Mays, a 6-6, 320-pound junior, had his request for immediate eligibility denied by the NCAA earlier this month, but Tennessee has filed an appeal on that ruling.

The departure of receivers Marquez Callaway and Jauan Jennings leaves 6-2 senior Josh Palmer as the top threat, with help from a group including slot man Brandon Johnson and transfer Velus Jones Jr.

The tailback spot looks like it’ll be shared by senior Ty Chandler and sophomore Eric Gray, who came on strong late in his rookie year.

The Volunteers will have to get some supreme efforts to surpass last year’s production when they finished No. 23 in total defense (334.5 ypg), the program’s best finish in 10 years. They also ranked in the top 20 in passing yards allowed (194) and interceptions (15) and led the country by allowing 10 plays of 30 or more yards.

As a comparison, Alabama allowed 18 such plays, LSU gave up 31 and Arkansas permitted 33.

Sophomore inside linebackers Henry To’o To’o and Quavaris Crouch are expected to be the unit’s top playmakers. To’o To’o, a 6-2, 235-pounder from Sacramento, Calif., made the Freshman All-America team last season after posting 72 tackles.

Junior cornerback Bryce Thompson came back from a three-game suspension and helped trigger the Volunteers’ big finish. He and classmate Alontae Taylor — plus nickel back Shawn Shamburger and reserves Kenneth George, Warren Burrell and Keyshawn Lawrence — could compose one of the better coverage crews in the conference. Lawrence impressed his teammates by winning the Vols’ Freshman Summer Workhorse Award.

Safeties Jaylen McCullough and Trevon Flowers are not as highly rated. Flowers is recovering from a broken leg that cost him seven games, and he might split time with senior Theo Jackson.

Said Pruitt: “We have talent back there in the backfield, and we have a lot of guys that have played a lot of football games. It’s time for them to elevate their game. This starts with practice, and we’ve got to do it with consistency.”

SEC East title scenario Guarantano has been an up-and-down performer throughout his 25 starts and 34 career games, so consistency at quarterback is a good start. There are many key pieces to replace on defense, but that’s Pruitt’s stock in trade.