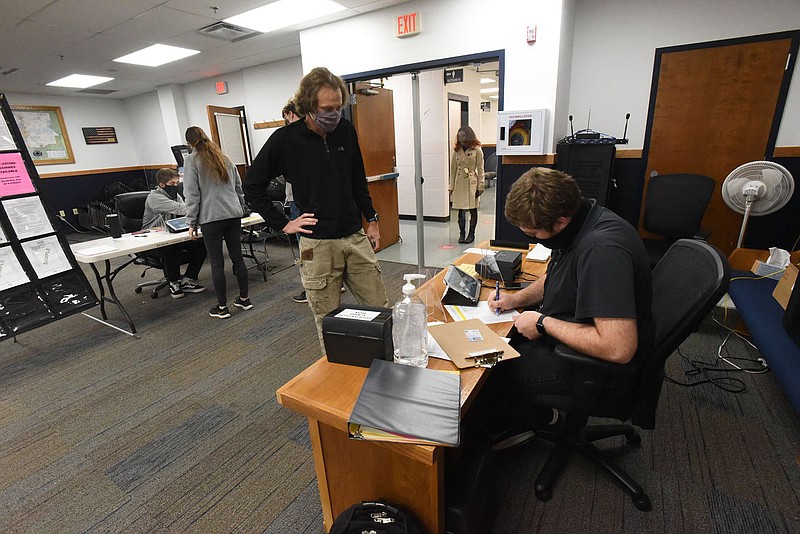 EARLY VOTERS Weston Penny (left), and his brother, William Penny (right), help voters on Wednesday Nov. 25 2020 during early voting for the runoff election at the Benton County Administration building. Council seats in Bentonville, Lowell, Centerton and Springdale will be decided in the runoff. Part of Springdale is in Benton County. Voters may cast early ballots on Monday at the administration building. The regular election day is Tuesday. Go to nwaonline.com/201126Daily/ to see more photos. (NWA Democrat-Gazette/Flip Putthoff)

FAYETTEVILLE -- Two poll workers set to work in today's runoff election have tested positive for the coronavirus, prompting officials to close a voting center in Springdale.

Jennifer Price, election director for Washington County, told the commission the supervisor and his wife tested positive for covid-19. Price said the four voting centers in the city should be able to handle the turnout. Price said a city council runoff in 2016 had about 1,400 ballots cast.

"We've still got four polling locations open," Price told the commission. "Typically, for a Springdale city runoff election we don't see a very large turnout. In this election, Oak Grove is not in the ward for the runoff. Elmdale is the main location we would want to keep open."

Price said the commission has the authority to close a polling place in the event of an emergency, and the covid-19 pandemic should qualify. She said the polling place supervisor called her Saturday to say he was ill and unable to work.

"We don't want voters, poll workers and others exposed to the virus," Price said.

Price said she will post a notice at the Oak Grove Baptist Church, telling any voters who may show up of the closing and providing them with the locations of the remaining vote centers. Max Deitchler, a member of the Election Commission, asked Price to also post a separate notice giving the reason for the closing.

"So if someone shows up they don't think it was for some random reason," Deitchler said. "They'll know that it was covid-related."

Council races in five cities in Benton and Washington counties will be decided in the runoff election.

Early voting was held Nov. 24-25 and Monday. County offices were closed Thursday and Friday for Thanksgiving. Through the three days of early voting, 761 ballots were cast in Benton County and 360 in Washington County.

Voters who requested an absentee ballot could turn in their ballot in person through Monday. Mailed ballots must arrive at the county clerk's office by today.

Mark Fougerousse and Councilwoman Kathy Jaycox are on the ballot for Ward 4, Position 2 in Springdale. Jaycox, the incumbent, withdrew from the election after ballots were printed.

Liz Estes and Kendell Stucki are running for the Ward 3, Position 1 seat in Lowell. Linda Vannoy didn't file for reelection.

In Centerton, the Ward 1, Position 2 seat is up for grabs between Councilwoman Robin Reed and Amy Rochette.

The general election runoff is today. Voters may cast a ballot at any polling place in the county where they are registered to vote. Voters must provide a form of identification.