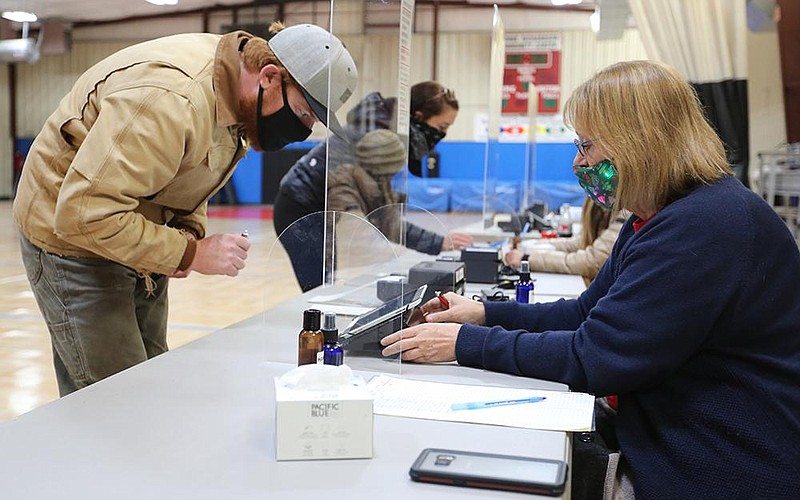 Daniel Smith (left) is assisted by Sarah Harrison, a Washington County election official, a he picks up his ballot to vote during a runoff election Tuesday, Dec. 1, 2020, at the Yvonne Richardson Center in Fayetteville. In Fayetteville, D‚ÄôAndre Jones and Tanner Pettigrew are vying for the open Ward 1, Position 2 seat on the city council. Check out nwaonline.com/201202Daily/ and nwadg.com/photos for a photo gallery. (NWA Democrat-Gazette/David Gottschalk)

The runoffs were for nonpartisan positions in Bentonville, Fayetteville and Springdale. The general election was Nov. 3.

Agnew, 39, is a senior director at Walmart.

“I am honored to have the trust of Bentonville and look forward to working together to make Bentonville a community where all feel welcome,” she said in a news release Tuesday night.

Matkins, 41, owns Matkins Greenhouse and Flowers in Bentonville. He is a fifth-generation Bentonville resident.

Bentonville’s City Council is made up of eight members, two in each of four wards. City Council members are elected at-large but represent wards. They must live in their ward.

Council members are paid $808 per month, according to the city website. Position 1 is a two-year term, and Position 2 is a four-year term. The city is gradually moving to all four-year terms.

Jones, 47, is a provisionally licensed social worker and community advocate. He will be the first Black elected member of the City Council.

Jones said he wants to help improve the quality of life for every resident in the city and touted his experience with various organizations and panels as examples of his leadership acumen. He played a key role in the city’s recent adoption of a resolution declaring racism a public health issue.

Pettigrew, 28, is a sales manager and broker for Rausch-Coleman Homes.

Jaycox, the incumbent, filed for reelection to serve Ward 4, Position 2, in northeast and central Springdale. She decided to move out of the ward and announced her withdrawal from the race in September. But the Nov. 3 general election ballots already were printed with her name. Jaycox and Fougerousse ended up in the runoff.

Fougerousse, 53, is the environmental, health and safety manager at Rockline Industries.

Fougerousse previously said he is a fiscal conservative.

“I want to make sure the taxpayer money is spent on the right things,” he said.

City Council members serve four-year terms and are paid $900 a month. They are elected at-large but represent wards. They must live in their ward.

The runoff results still have to be certified by the election commissions in Benton and Washington counties.

Mike Jones may be reached by email at mjones@nwadg.com . Stacy Ryburn contributed to this report.